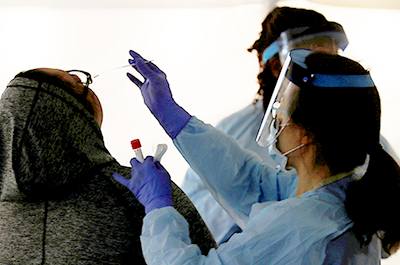 Covert COVID. MPR’s Catharine Richert report: “In January, college freshman Kate Austin was on a dream trip teaching English in Tokyo. … But about two weeks in, things went sideways when Austin developed some now-familiar symptoms: a cough, body aches, fever and intense fatigue. … Austin’s arrival back in the United States marked the start of a chain reaction. In the coming weeks, Austin’s parents and friends would get sick — with one of them ultimately being diagnosed with COVID-19. Her story underscores just how much understanding of coronavirus has changed in a short period of time, and suggests that the virus has been in Minnesota weeks, if not months, longer than tests initially detected.”

Stay-at-new-home. The Star Tribune’s Jim Buchta reports: “Homebuilders in the Twin Cities ramped up production last month, despite a barrage of challenges including growing economic uncertainties and a mandate to practice social distancing rules on job sites. … During April, builders were issued 474 permits to construct single-family homes, a 16% increase over the same period a year ago and the highest April total since 2006, according to a monthly report from Housing First Minnesota. At the same time, planned multifamily construction was down by nearly half compared with last year.”

Less-positive news from the manufacturing sector. Also in the Star Tribune, Dee Depass reports: “Midwest manufacturing employment, including Minnesota, has plunged to the lowest level since 1993 in April because of the economic downturn caused by the coronavirus. … The nine-state Creighton University Mid-America Business Conditions Index — in which a reading below 50 signals contraction — crashed to a worrisome 35.1 from 46.7 in March, according to the report released Friday. … Half of surveyed supply managers reported that vendors had stopped business, while another third reported shipping problems related to the pandemic.”

The Minnesota Spokesman-Recorder has an interview with Fifth District Rep. Ilhan Omar. Here’s a snippet:

MSR: How would you respond to criticism from your opponents that you haven’t been as responsive to your District 5 constituents as you could be, particularly in communication and representation?

Omar: That shows, I would say, their lack of participation in our community. [If] you are a full participant of the community and you understand the day-to-day struggle that many of our community face, you would recognize the work that we put in every single day.

All is NOT well: “Erosion near city well worse than expected” [Mankato Free Press]

Explaining “uff da”: “Where does ‘uff da’ come from, and why do Minnesotans say it?” [Star Tribune]
Source link

About the Author: Tom Nehil