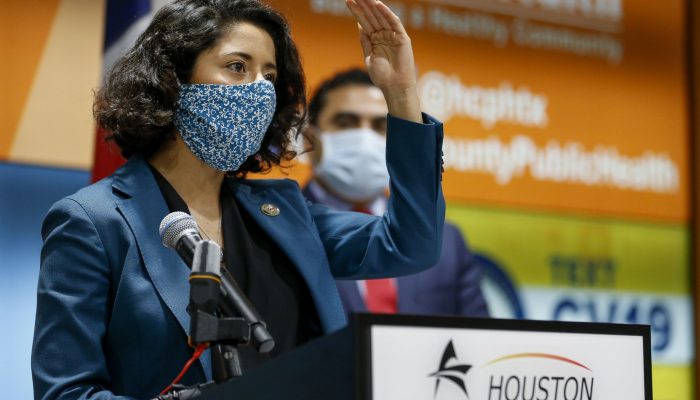 Harris County Judge Lina Hidalgo on Wednesday will order residents to cover their faces in public, county officials with knowledge of the plan said, the latest effort by local government to slow the spread of the novel coronavirus.

The new rules, which will require residents 10 and older to cover the nose and mouth when outside the home, will take effect Monday and last 30 days, three county officials said. Acceptable garments include a homemade mask, scarf, bandana or handkerchief. Medical masks or N-95 respirators are not recommended as they are most needed by first responders and health workers.

Hidalgo is expected to announce the face mask rule at a 3 p.m. news conference.

Under the order, the county’s 4.7 million residents must cover their faces at all times except when exercising, eating or drinking, alone and in a separate space, at home with roommates or family or when doing so poses a greater risk to security, mental or physical health.

Employers at businesses deemed essential under Harris County’s stay-at-home order must provide face coverings and training to workers whose jobs require them to come into contact with colleagues or the public.

Hidalgo has yet to determine whether to extend the stay-at-home rules, which expire April 30.

The Centers For Disease Control recommends wearing masks when social distancing is not possible, such as at a grocery store. Many people who have coronavirus do not show symptoms, and the disease can be spread through speaking, coughing or sneezing.

Hidalgo repeatedly has noted that Houston has suffered a far more mild coronavirus outbreak than other major cities, including New York, San Francisco and Seattle. Though Harris County has recorded 79 deaths, its hospitals never have exceeded their intensive care and ventilator capacities since the virus was detected here in March, and a field hospital county officials ordered built may never need to be used.

Hidalgo has implored residents to heed the county’s restrictions on movement and commerce, however, warning cases could spike if residents drop their guard. The county judge said rolling back restrictions would be premature before widespread testing becomes available and the virus has reached its peak here, which health experts predict will be at the end of April.

“We’ve seen places … Singapore, for example, that opened up too quickly,” Hidalgo said Monday. “So, then the second wave was worse from the first one.”

The face covering requirement is the latest in a series of measures enacted by Houston and Harris County the past seven weeks to stifle the outbreak. First was the closure of the Houston Rodeo March 11, followed by restaurant and bar restrictions March 17 and the stay-at-home order March 24.

Hidalgo may be unable to slowly ease restrictions Harris County as she sees fit, however. Gov. Greg Abbott said Monday he would issue a new executive order Monday as part of his plan to reopen the Texas economy. It would override any local coronavirus measures.

The county judge struck a conciliatory tone on Tuesday when asked about Abbott’s potential curtailing of local rules. Hidalgo, a Democrat, so far has avoided clashing with the Republican governor, unlike Dallas County Judge Clay Jenkins, who first tussled with the governor over a pop-up hospital and then extended his stay-at-home order through May 15.

“I work very closely with Gov. Abbott,” Hidalgo said, noting the state had helped set up a partnership with Walgreens for testing. “I think, in many ways, we are at a great place in terms of bipartisanship, particularly given the vitriol that was going on just before this crisis. I don’t think this is a time to stir things up.”

Laredo on April 2 was the first Texas locality to require residents to wear face coverings. Dallas County made them mandatory last week.