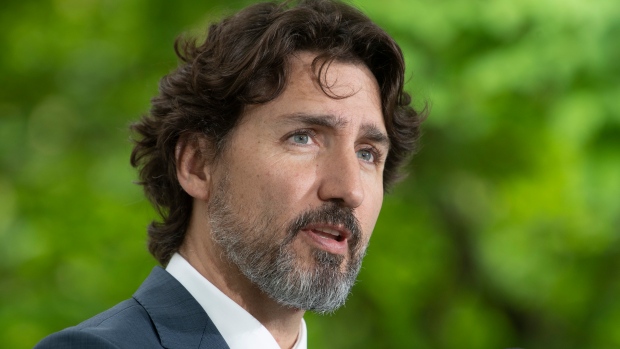 OTTAWA —
The federal government will soon be bringing in a limited exemption to current border restrictions to allow immediate family members of citizens or permanent residents to come into Canada, Prime Minister Justin Trudeau has announced.

On May 29, Trudeau first indicated that the government was exploring possible modifications of the directives for the Canada Border Services Agency to allow cross-border families in Canada and the United States to reunite. Trudeau did not specify whether this new policy will be limited to reunifications across that border, or whether family members from other countries will also be able to enter Canada.

“Anyone entering the country will be required to quarantine for 14 days, and if you don’t follow these rules, you could face serious penalties,” Trudeau said Trudeau said, making a point to emphasize the ongoing health and safety concerns about reigniting a second wave of COVID-19 by letting in people from abroad.

“All this is difficult and frustrating, and longer than we hoped it would be in many ways, but at the same time we know that the cost of having to return into social isolation, return into lockdown because of a massive resurgence is not one that anyone wants to bear, which is why we are being very cautious going forward,” Trudeau said.

Minister of Immigration, Refugees and Citizenship Marco Mendicino will have more details about the new policy during a press conference following Trudeau’s media availability.

Nearing three full months since the spread of the novel coronavirus was declared a global pandemic and a series of border and travel restrictions were put in place, this is the first move the federal government is making towards loosening the rules.

On March 17, Canada announced it was shutting the border to international travellers, specifically non-Canadian citizens, with the exception of permanent residents, the immediate family members of Canadian citizens, diplomats, air crews. Those initial restrictions did not apply to U.S. citizens.

Though just days later, on March 21, Canada and the U.S. closed their shared border to all non-essential or “discretionary” travel. That agreement to restrict tourism and other visitors has been extended every month since, with the current extension in effect until June 21 at least. The agreement as it stands exempts the flow of trade and commerce, as well as vital health-care workers such as nurses who live and work on opposite sides of the border.

“This is an incredibly difficult time to be apart from a spouse, a child, or mom or dad. We hear that,” Trudeau said on Monday.

During his Rideau Cottage address on Monday morning, Trudeau also spoke about the existing direct financial aid programs that have been rolled out over the last few months in an effort to offset the economic and social impacts of the nationwide shutdowns.

The two biggest have been the Canada Emergency Response Benefit, which more than 8.4 million Canadians have applied for, receiving a total of $43.5 billion; and the Canada Emergency Wage Subsidy, which more than 195,500 employers have applied for, receiving $9.3 billion to help cover 2.5 million employees’ pay. Smaller offerings have also been made to targeted sectors and segments of the population, such as students, seniors, and people with disabilities.

On Monday Trudeau vowed that work continues with the provinces and territories on further help needed as each region gradually reopens, such as personal protective equipment, child care, transit, paid sick days, and additional help for at-risk populations.

“There’s no doubt that the last few months have been harder than anyone could have expected. This pandemic has meant different challenges for everyone, but no matter who you are, and no matter what you’re dealing with, a little bit of help can make all the difference,” Trudeau said.

The massive spending—passed swiftly through abbreviated emergency House of Commons sittings—has prompted calls from the opposition parties for a full accounting of the cost to taxpayers so far and the overall impact COVID-19 has had on the economy given the damage it’s done to global markets.

To date the government has said there remain too many uncertainties to offer up an accurate budget or economic update.

About the Author: Rachel Aiello