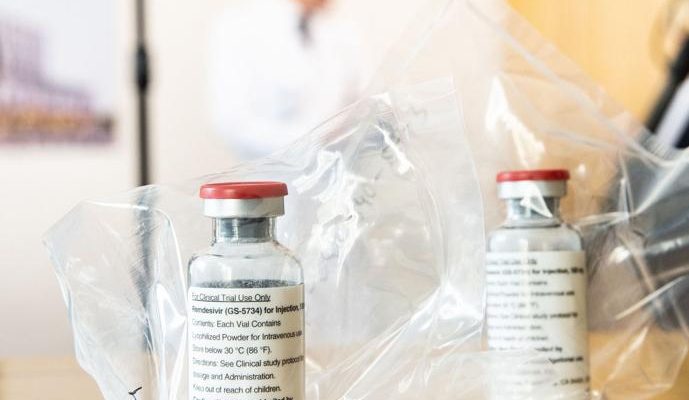 Those are words that medical experts are frequently using to describe results of a recent test of the drug remdesivir for patients hospitalized with severe infections of COVID-19.

More than half of the patients were so ill that they were on mechanical ventilators, while another 8% were on a treatment that uses a pump to oxygenate blood outside the body.

After receiving remdesivir once a day for up to 10 days, two-thirds of patients improved their support status, and nearly half were discharged from the hospital, researchers reported in an article published last week in the New England Journal of Medicine. Seven patients died from the disease after completion of remdesivir treatment, including six who had been receiving invasive ventilation.

But the research, supported by drug-maker Gilead Sciences, involved only a small group of patients. Researchers in the Journal report discussed some other limitations to the study, and experts interviewed by the Atlanta Journal-Constitution raised additional concerns.

“The results are somewhat encouraging but aren’t nearly enough,” said Dr. Mark Ebell, a professor at the University of Georgia’s College of Public Health.

The research in question is what’s called a case series, in which people with a known disease receive a similar treatment. This study began with 61 patients, but eight were excluded because posttreatment data wasn’t available or one because of a mistake in when the drug was started. Of the 53 remaining patients who were the focus, 40 patients were men, and their median age was 64.

Remdesivir is also under clinical trials at numerous locations, with one of the studies at Emory University. In those trials, the safety and effectiveness of the anti-viral is compared with that of other potential therapies and a placebo.

Dr. Amy Hajari Case, medical director for pulmonary and critical care research at Piedmont Healthcare, echoed many of Ebell’s thoughts about the New England Journal of Medicine report. She was encouraged that patients did not show new adverse effects to the drug or safety signals. But she wanted to see more patients in the research.

“The larger the study, the more confident you can be it was related to that intervention,” she said.

The Journal report says 32 patients reported adverse effects during followup; the most common serious adverse events from the test — septic shock, acute kidney injury and hypotension — were in patients who were receiving invasive ventilation.

Dr. Rafael Ponce-Terashima, a Mercer University assistant professor of medicine and infectious diseases, was glad to see the lack of new side effects. He was also concerned about the lack of patients studied and how they were selected.

“We have to interpret (the report) with caution,” he said.

Scientists worldwide are speeding up research for potential COVID-19 treatments and vaccines since the disease has no cure. Emory University last week received federal approved to begin human clinical trials of EIDD-2801, a drug developed by Drug Innovation Ventures at Emory.

Remdesivir, created several years ago as a potential treatment for the Ebola virus, has become a popular drug for treatment research. Case said it’s known to have a positive preclinical effect against different forms of coronavirus, and researchers have been optimistic that it can be effective against the novel coronavirus.

Clinical trials of remdesivir are sponsored by the National Institute of Allergies and Infectious Diseases and based at the University of Nebraska Medical Center. Gilead will enroll about 1,000 patients in the initial phase of the studies in countries with high prevalence of COVID-19, according to its website.

Additionally, researchers are studying whether other anti-inflammatory or HIV drugs can be effective treatments for COVID-19. The work includes taking plasma from those who have recovered from COVID-19 and placing it in patients with the disease.