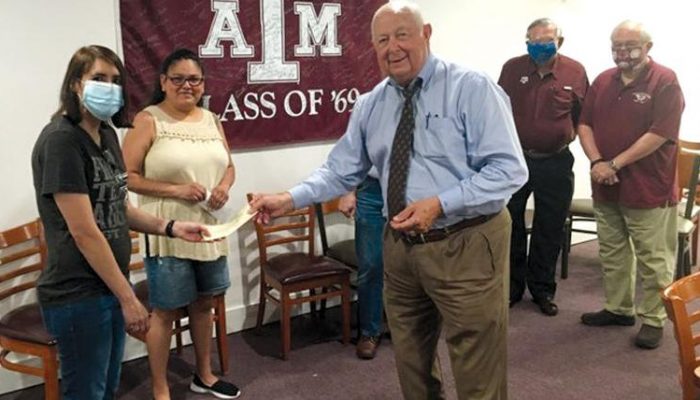 
With the dining room of Denny’s restaurant in College Station shut down, servers Linda Martinez and Carla Hidalgo — like many others throughout the Brazos Valley — have been going without work for the past month. This situation didn’t sit well with members of Texas A&M’s Class of ’69, who have a longstanding relationship with the two employees.

More than 20 people within the alumni group raised $3,000 in just two weeks — a gift that was presented to Martinez and Hidalgo on Friday.

The two women met at the Denny’s restaurant on Texas Avenue in College Station with the Class of ‘69’s four class agents. Class agent Bill Youngkin happily presented each server with a $1,500 check. Youngkin told The Eagle that the group had contacted the women just one night prior, hinting that they would be given a surprise Friday afternoon.

When the coronavirus pandemic first hit Texas, Martinez said she was scared for the safety of her customers meeting in large groups, as the Class of ’69 has done at Denny’s every Friday morning for the past 15 years. Even before Gov. Greg Abbott mandated business closures, Martinez advised the group to hold off on the traditional breakfasts temporarily. Once Denny’s did close its doors in late March, not only had Martinez lost her part-time income, but the promise of seeing the alumni again soon.

Hidalgo said she is going without four days of income per week.

“I miss work,” she said. “I think I’m better now. … I am getting a little bit of unemployment, and my kids are grown up.”

Hidalgo said she was thankful for the gift that the Class of ’69 collected for her.

“I am very happy and feel so special that these guys want to help me too,” she said. “I feel so grateful. I can’t believe it. This [money] will help me a lot.”

Youngkin said that a fellow alumnus, Bill Howell, came up with the idea to raise money for the two servers earlier this month. It didn’t take long for nearly two dozen Aggies to collect the funds for their favorite wait staff. The Class of ‘69 has been congregating at this Denny’s for a 6 a.m. Friday breakfast since 2005, often with as many as 25 people in attendance.

Martinez has known the group all 15 years, and Hidalgo also has spent a significant amount of time getting to know the members. Youngkin said that the women can remember all of the alumni groups’ names and go-to meal preferences.

“They know things our wives don’t know — which is what we want for breakfast!” Youngkin said.

Denny’s even allowed the members of the Class of ‘69 to decorate the party room area with pictures of their class and Texas A&M memorabilia, making the space an Aggie room, Martinez said.

“I remember the first Friday Mr. Youngkin was here, and we talked about how to have this done, and he had all the name tags set out for everyone,” Martinez said. “And ever since then they have just become a family. They invited me to their 45th reunion and made me an honoree in front of everybody. …

“I have grown to really love them. The best part of my week is Friday morning.”

Youngkin said that although members of the alumni group have been able to meet online over Zoom livestreaming sessions, they are itching to spend time in person once more.

“I think I’ve heard from everybody that they are missing getting together for breakfast, and they hope this ends soon,” he said

About the Author: REBECCA FIEDLER rebecca.fiedler@theeagle.com