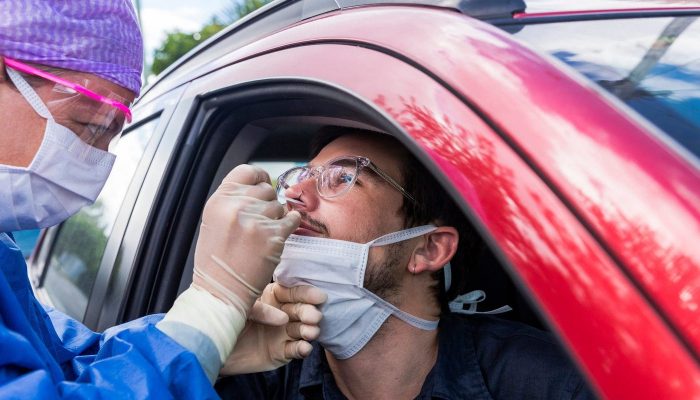 Drugstore chains Walgreens and CVS and supermarket chain Kroger announce they will expand their free COVID-19 testing to more states.

Federal regulators are investigating a Texas laboratory that a Florida hospital chain dropped last week because of delayed and unreliable COVID-19 test results.

AdventHealth, which has 45 hospitals in nine states, terminated its Florida contract with MicroGen DX due to concerns about the validity of some of the 60,000 tests MicroGen had processed for the system because the lab left them at room temperature for days, according to an AdventHealth statement. The specimens should be refrigerated at 2 to 7 degrees Celsius (about 32 degrees Fahrenheit) and then put in freezers at -70 degrees Celsius after three days, according to the Centers for Disease Control and Prevention.

The company is also selling a saliva-only test that can be administered in a “hospital, clinic, drive-thru clinic or at-home,”  in all 50 states without an Emergency Use Authorization from the Food and Drug Administration, said MicroGen spokeswoman Ashley Moore. An “authorized EUA” is required in a public health emergency, according to the FDA, for “any COVID-19 test for at-home testing, with or without the use of telemedicine.”

MicroGen CEO Rick Martin said he doesn’t believe the company needs one. He filed for one anyway and said he believes FDA is taking too long to approve it. Companies can avoid EUAs unless they get state approval for use only in that state, the FDA said. Spokeswoman Ashley Moore said there were “no authorizations per say at the state level.”

AdventHealth said it is notifying about 25,000 patients who got unreliable or delayed results. It is advising them to seek medical care and retesting if they tested negative but have COVID symptoms. Patients who tested positive should also seek retesting, AdventHealth said. It told the lab to destroy remaining tests and said its patients who haven’t received results from MicroGen DX will never receive them.

The dispute is expected to affect testing across the U.S. as MicroGen had an undisclosed number of other clients.

AdventHealth said Monday it “notified the appropriate regulatory agencies of the issues we experienced with this lab.” Food and Drug Administration investigators are reviewing data and interviewing experts, according to emails reviewed by USA TODAY.

In a statement, Martin said he was unaware of “any inquiries into our lab,” but added that after the AdventHealth announcement it started working with the American College of Pathologists on its testing requirements, “which we are confident we will continue to meet.”

AdventHealth also said the lab failed to meet promised turnaround times. Martin said MicroGen is processing samples at a rate of about 6,000 a day to serve hospitals and other clients across the U.S. That’s below the 10,000 first promised or the 8,000 a month or more ago, but shows potentially mishandled tests could number in the hundreds of thousands. It has been conducting the tests daily since late March.

AdventHealth sent a team to MicroGen’s lab after the results were delayed and saw samples left at room temperature, said MicroGen CEO Rick Martin. He maintains the samples were still valid and that the delays were due to AdventHealth not providing proper patient data and the lab running out of plastic parts used in its equipment.

MicroGen said in early April that its sputum (mucus) test was a way to circumvent the backlogs other labs were suffering due to lack of supplies. But the lab, which offers saliva, sputum and nasal swab tests, ended up facing its own supply shortages as it struggled to meet turnaround times it promised clients.

The lab also processed hundreds of tests for the health system Health First, but the Florida-based chain stopped sending samples after it, too, began to see delays in turnaround time in early May, Martin said.

Health First would not respond to questions about the numbers of tests it sent to MicroGen, but the hospital chain issued a statement last week that said “most labs” it used were meeting their contracted 24-hour turnaround time.

While MicroGen is based in Orlando, its lab is in Lubbock, Texas. Martin said he had planned to move the lab to Florida, but “I’m not now” after this experience.

How do labs get approved?

The dispute raises questions about how regulators and hospitals approve and choose labs.

Martin said he and his lab have a “great reputation.” However, in January 2017, Martin’s former employer Advanced BioHealing’s parent company, Shire, paid $350 million in a civil settlement with the Justice Department in the anti-kick case. Martin was a sales representative accused of bribing Deparment of Veterans Affairs doctors to use the company’s DermaGraft biologic wound dressing. He was indicted in 2017 for allegedly participating in the fraud, but was acquitted at trial in February 2019.

The rush to ramp up coronavirus testing during the pandemic created a “wild west (that) opens the opportunity for fraud and abuse,” said Dr. Rahul Gupta, a former West Virginia health commissioner, who oversaw that state’s lab. The FDA, said Gupta, “should step up in providing more guidance, along with the CDC.”

“Delays signal an issue that may impact the integrity of the testing lab and its declared or promised timelines and procedures,” said Gupta, now the chief medical and health officer for March of Dimes and a clinical professor at Georgetown University Medical School. “It’s most important to ensure you’re working with an established and trusted lab not a ‘fly by night set up’ as many are popping up.”

After recent criticism, the Food and Drug Administration has become tougher on which tests get an “Emergency Use Authorization” to be sold.

Getting these authorizations has “historically been a high bar,” but it is lower than the hurdle of the FDA’s scientific safety review process for pre-market approval to sell, said Kelly Wroblewski, director of infectious diseases at the Association of Public Health Laboratories. EUAs are designed to “make it easier to get tests to market,” she said. Companies don’t need to provide clinical performance data, but have to validate the tests.

The FDA was approving EUAs faster earlier in the pandemic, but Wroblewski said the reviews appear to be more exacting now,

“There were at least some fences around molecular (COVID-19) testing all along,” she said. “There was no bar around serology (antibody) testing.”

Martin said the FDA has been unusually tough on his company’s lab in its pursuit of the EUA for saliva tests. Meanwhile, he said the FDA quickly approved Abbott Laboratories, whose tests had so many problems the agency issued a warning last week.

Gupta said tighter federal controls are needed on “who can test, what tests are approved and ensuring that these facilities have all the equipment prior to advertising large capacities.”

“Unfortunately, there are real people at the other end this time and lives will be surely lost,” he said.