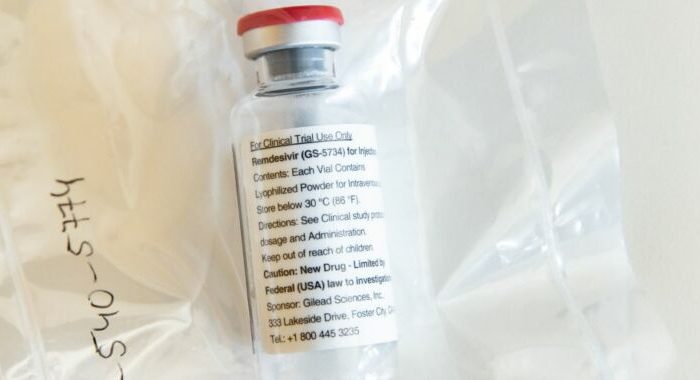 
Enlarge / A vial of the drug Remdesivir destined for a clinical trial.

Update, 5:40pm ET, April 29: Additional data on remdesivir’s effects from a separate study are described below the original article.

Today, Dr. Anthony Fauci announced the first potential treatment for COVID-19 had emerged from a randomized clinical trial sponsored in part by the National Institutes of Health. The drug, remdesivir, significantly shortened the recovery time for patients with COVID-19, triggering an ethical clause that allowed the placebo group to receive the real drug. Unfortunately, that cut the trial short before a significant effect on mortality was clear.

Fauci made the announcement while speaking to the press with President Donald Trump in the White House.

Remdesivir was originally developed to target a different virus: Ebola. It works by binding to the enzyme that copies the RNA genome of the Ebola virus. Since our cells don’t need to make copies of RNA, the hope has been that we can find drugs that target the viral enzyme but not any that our own cells need. Testing had already indicated it was safe for general use, suggesting that remdesivir was successful in this regard. Unfortunately, it didn’t clearly work against the Ebola virus, leaving it in the very large collection of drugs that are safe but ineffective.

With the onset of the SARS-CoV-2 pandemic, remdesivir received renewed interest, given that the new virus also has an RNA genome and enzymes dedicated to copying it. While the drug wasn’t designed specifically to bind these proteins, the overlapping biochemical needs of the Ebola and SARS-CoV-2 enzymes meant that there was a chance that the drug would be effective, leading to some early anecdotal reports of its use.

This appears to be the first report of a non-anecdotal test of the drug. Fauci said that the trial, conducted in the United States and various European countries, had enrolled 1,090 patients. Those participants were randomly assigned to receive the drug or placebo, and the primary measure of success was time to recovery—how quickly the patients could be discharged from the hospital or resume normal activities. By this measure, remdesivir was a significant success; those receiving the drug took an average of 11 days to recover; those on the placebo took 15 days. That’s a 30 percent faster recovery, a result that’s statistically significant given the size of the trial population.

At this point, ethical rules that govern the clinical trial kick in. Researchers directing the trial are unable to see the results as they come in to limit the option of bias creeping in. But an independent review board does periodic checks to see if the drug is helping or harming the patients receiving it. If either is true, the trial can be cut short. In this case, once it became clear that there was a significant positive effect, the ethical rules kicked in, and the board terminated the trial so that those in the placebo group could receive the treatment. (This is called “unblinding” the trial.)

Unfortunately, that left an additional issue unresolved: does the drug reduce the frequency of deaths in people with COVID-19? Those receiving the drug had a mortality rate of 8.0 percent, while the placebo group was at 11.6 percent. The standard for statistical significance in these matters is a p-value of 0.05; the results here were just outside of that at a p-value of 0.059. As Fauci put it, “the mortality rate trended toward being better.”

Fauci indicated that we’re likely to learn more about the drug’s effects quickly regardless. Since there was no drug known to be effective against COVID-19, remdesivir becomes what’s called the “standard of care” by default. As more drugs enter trials, their activity will no longer be compared to placebos; instead, they’ll be compared to remdesivir. In addition, a more detailed examination of the data on participants may reveal more about which (if any) symptoms it alters or patient populations it’s most effective for. The NIH has indicated a report on the trial will be made available shortly.

While time to recovery may not seem significant compared to mortality, three to four fewer days of suffering will undoubtedly be very significant to those afflicted with the disease. It can also be significant from a public health perspective, allowing hospitals in places with severe viral outbreaks to turn over patients more quickly and thus treat a larger population.

UPDATE: On the same day that Anthony Fauci announced the positive results of a large clinical trial of the antiviral drug remdesivir, the research journal The Lancet released a smaller randomized study of the same drug from China. In this study, the researchers had planned on a large-enough population of patients for their study design to have a high probability of producing significant results. But the severe restrictions in place in Wuhan cut the number of patients in their hospitals that met the study’s selection criteria, leading to its termination with a small population (only 237 patients). Potentially confusing matters, the participants were allowed to continue some other untested treatments, including anti-virals and immune-system modulators.

To track the effect of the drug, the researchers used a six-point scale that measured the severity of their patients’ condition, ranging from hospital discharge through needing oxygen, up to needing a ventilator, and ending with death. The outcome being tested for was a two-point improvement on this scale.

None of the results were statistically significant, but the researchers saw a result consistent with what Dr. Fauci announced today: those taking remdesivir reached clinical improvement faster than those in the placebo group. Had the trial involved more patients, it might have found a significant improvement here. Since the total number of people needing ventilators was even smaller, there was no chance of a significant result here.

Since the analysis has actually been completed (unlike the one announced today), there are a lot more details here, some good and bad. For example, the number of severe side effects was indistinguishable in the treatment and placebo groups, which is a positive. But a check for viral RNA in various samples showed no significant reduction in those receiving the drug—somewhat disappointing, as the drug is expected to work by blocking the virus’ reproduction.

While this study is too small to provide a clear picture of the utility of remdesivir, it’s useful to make the data available. For one, the results are consistent with the ones announced earlier today, which is reassuring. And, as additional small studies are likely to have been done at the same time, it’s possible that the data can be combined to provide a useful meta-analysis of remdesivir’s effects.

About the Author: John Timmer