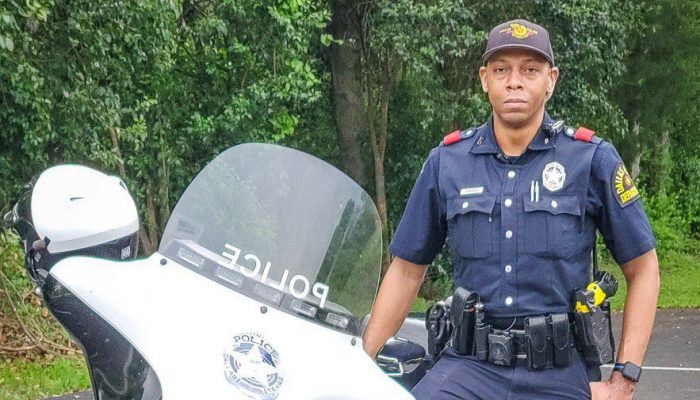 Johnny Walker, a Dallas Police officer, was on his way to work in mid-March when he started to feel feverish. It was unusual for the 40-year-old who rarely gets ill.

A test result days later confirmed what he had feared: He had contracted the coronavirus.

He didn’t need to go to the hospital, but Walker fought several days of fever and some fatigue while self-quarantined for a week at home.

Walker, a seven-year veteran of the department assigned to the Central Patrol division in downtown Dallas, is the first city police officer to recover from the respiratory illness COVID-19. He works in the traffic division, patrolling the city on a motorcycle.

County and city officials have tried to slow the spread of the disease but have warned the number of cases will likely increase, even with strict stay-at-home orders.

But for first responders, the coronavirus pandemic presents an unprecedented challenge. Many major police departments are working with a reduction in staff. In Dallas, at least eight officers as of Thursday morning have tested positive for the illness, according to the Police Department.

Walker still isn’t sure how he got the illness. He said he followed the recommended social distancing guidelines.

But before arriving to the patrol division in March, Walker told a supervisor he was going to go home and see a doctor. He took his temperature and had about a 100-degree fever. He went to an urgent care clinic, concerned it could be the novel coronavirus.

First, doctors tested him for the flu and strep throat. But the tests came back negative.

Then he got the COVID-19 test, which requires a swab of the nasal cavity, often uncomfortable for patients. It took a few days to get the results.

“At that time, it was really early on and they didn’t have enough information on it,” he said. “It was more of a guessing phase.”

Walker didn’t want to risk any exposure to his loved ones. He called his 2-year-old daughter’s mother to pick up the girl before he came home from the doctor.

“I worried about anything that could be passed on to my family,” he said.

It’s not the first time Walker had life turn upside down.

The New Orleans native left his hometown in August 2005 as Hurricane Katrina plowed through the Louisiana coast. He was about to join the Jefferson Parish Sheriff’s Department.

Walker evacuated to North Texas and worked at a medical devices company in Addison. It was difficult to get back into the city, and his home had flood damage.

“I chose to stay and make it a fresh start,” Walker said.

He stayed at the Addison company for several years but still had the dream to work in law enforcement. He gave it a shot again and joined the Dallas Police Department in 2013.

He worked out of the South Central patrol division after he finished the training academy. Now, Walker, who loves to ride his motorcycle for fun, is in the motors division in the traffic unit.

As an officer, Walker knows his job can be dangerous. But the threat of the coronavirus was unexpected.

“We didn’t think we’d have to fight something like this,” Walker said.

As the news started to warn about the potential for an outbreak of the virus in Dallas, Walker stocked up on non-perishables and groceries. He recognized there was a high likelihood of exposure because of his work.

When he got ill, he experienced a fever for about five days. He never had to stay at the hospital and instead waited to get better at home.

He drank plenty of fluids, watched Netflix, slept a lot. Coworkers dropped off Tylenol and other goods for him. He FaceTimed with his daughter, waiting to hug her again.

By March 25, he started to feel well again. His fever ended, and he didn’t need to take medication. He continued to quarantine for another week to make sure his symptoms were gone.

“I didn’t think I would be the first one back,” Walker said.

On his first day back at work Wednesday, he showed up to the patrol division, worked — even wrote a ticket. It was like he had never left.

“The only thing different is that we were all six feet apart,” Walker said.

But he’s more careful now on the job.

“I’m more cautious than ever. I used hand sanitizer. Wash my hands. Use a cloth to wipe my hands,” Walker said.

On social media, people celebrated his return, with thanks and well wishes.