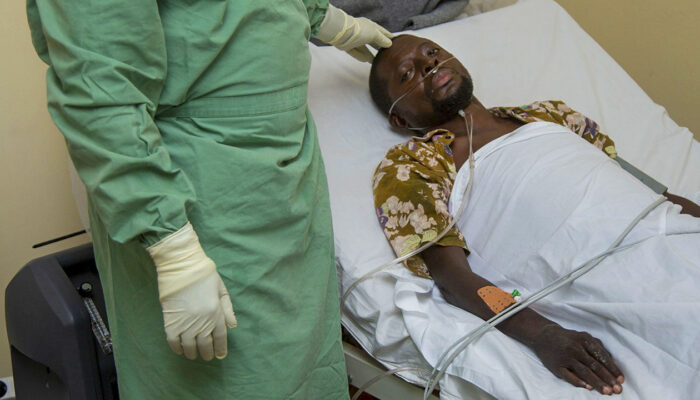 
A COVID-19 patient in the Democratic Republic of the Congo

Hundreds of drug trials around the world have been testing possible COVID-19 treatments, but almost none have been in Africa. Now, researchers on the continent are mounting a large effort to try to answer a crucial question that has gotten relatively little attention: Could cheap, widely available drugs prevent patients with mild illness from becoming severely sick?

“This is the first major drug trial across the continent,” says epidemiologist John Amuasi, who leads the Ghanaian arm of the Africa-wide project, named ANTICOV. “I would have liked this to come much earlier, but it’s really great that this is happening.”

What is raising some eyebrows, however, is one of the first drugs to be tested: the malaria treatment hydroxychloroquine, which several other studies have concluded is not effective in preventing or treating COVID-19.

When SARS-CoV-2 started to spread across the world, many worried that the virus’ impact would be particularly devastating for African countries. “Many of us scientists in Africa were actually calling for trials at the very early stages, because we were concerned that we were going to be the hardest hit,” says Amuasi, who works at the Kwame Nkrumah University of Science and Technology in Kumasi, Ghana. The pandemic even fueled fears that Africa would become a testing ground for unproven and potentially risky therapies and vaccines. In the end, however, the opposite happened: Africa fared much better than Europe or the Americas in terms of per capita deaths and infections from COVID-19, and researchers launched few clinical trials there.

ANTICOV, launched in late September, aims to recruit thousands of patients in 13 countries. It focuses on testing cheap drugs that could keep patients out of hospitals. If large numbers of patients progress to severe disease that requires oxygen or ventilation, the result “would be a catastrophe” for health systems in Africa, says Nathalie Strub-Wourgaft of the nonprofit drug development group Drugs for Neglected Diseases initiative, which is coordinating the trial.

Specifically, ANTICOV aims to find a drug that reduces the likelihood of mild COVID-19 cases progressing to severe illness by 50%, Strub-Wourgaft says. The investigators hope to test a long list of drugs, including the hepatitis C drug sofosbuvir, the antiparasitic drugs nitazoxanide and ivermectin, and colchicine, which is used to treat gout. The first to be tested, however, are the HIV combination drug lopinavir/ritonavir and hydroxychloroquine.

Patients who come to participating hospitals for any reason will be tested for COVID-19 and invited to enroll in the trial if they test positive. Participants will be given one of the study drugs or paracetamol, a widely used painkiller, for 21 days. They can report symptoms daily using an app or answer questions by phone. If they exhibit breathlessness or other symptoms, they may be called back to the hospital. If their oxygen saturation drops below 94% at any point, that will be a mark against the drug they are on. In some countries these patients will then be enrolled in the World Health Organization’s trial for hospitalized patients, called Solidarity.

So far, only the Democratic Republic of the Congo (DRC) has started its trial and enrolled about 150 patients. Over the next few months, a dozen other nations, including Sudan, Uganda, Mozambique, and Mali are expected to join. Kenya is slated to start recruiting next week. The first patients in Ghana should be enrolled in early 2021, Amuasi says. Researchers will run an interim analysis on data from the first 300 patients and repeat the analysis with each additional 450 patients. The researchers plan to add more treatment arms to test other drugs, and to drop drugs from the study once they reach preset criteria for success or futility.

ANTICOV will prioritize testing hydroxychloroquine even though two large clinical trials—Solidarity and the United Kingdom’s even larger Recovery trial—have clearly shown that it doesn’t help hospitalized patients. The drug also failed to prevent infections or to help patients with mild symptoms in several smaller trials. “I personally would not start with hydroxychloroquine,” says Martin Landray, an epidemiologist and physician at the University of Oxford and one of the principal investigators of the Recovery trial. “There have been so many studies of it and none of them have shown any hint of any promise.”

Still, hydroxychloroquine is alluring for many reasons. “It’s a very cheap drug, and it’s produced largely from a resource that is abundant in Africa,” Amuasi says. (The largest plantations that grow the quinine-producing plants used to make the drug are in the DRC.) And it is still being used in some African countries to treat COVID-19, so a negative result in ANTICOV might help to put any lingering questions about the drug’s effectiveness to rest. “I would be very surprised if the results of this trial do not provide the final answer,” Amuasi says.

Even if hydroxychloroquine isn’t the best drug to start with, studies like ANTICOV are vital, Landray says. “We have to find treatments that are widely available, widely affordable, and scalable for a pandemic,” he says.

Strub-Wourgaft notes that less than 4% of clinical trials for COVID-19 are conducted in Africa. There have been hardly any vaccine studies, for instance, which raises another question: How will African countries deal with vaccines that have been shown to be efficacious on other continents? “I’ll be very uncomfortable, even though vaccine trials have been conducted in Europe and North America and other places, for vaccines to be rolled out in Africa without adequate trials [conducted on the continent],” Amuasi says. Because several vaccines are now considered efficacious, running another trial with a placebo group is ethically questionable, he concedes. But given the high genetic diversity in Africa a lack of resources in many areas that could compromise a vaccine’s effectiveness, such trials are necessary, he says, to prove “that what we see in the global north is what we also see in the global south.”