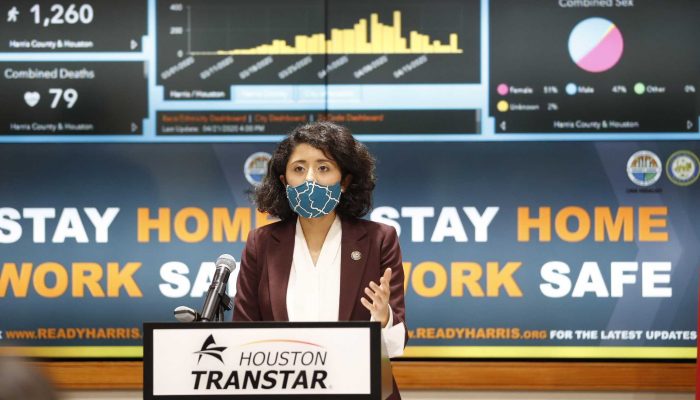 Hidalgo outlined the strategy in response to Gov. Greg Abbott’s decision a day earlier to allow restaurants, malls, movie theaters and other businesses to reopen Friday. Harris County’s government will do its best to adjust, the county judge said.

“Frankly, I think containing this virus will be a tall order given the May 1 timeline,” Hidalgo said. “But we’re going to do everything we can, move heaven and earth to make it work.”

The county plans to recruit 300 “contact tracers” to investigate where infected people may have spread the virus and to whom. Epidemiologists will train existing county employees, volunteers and some new hires on how to track the path of a COVID-19 patient.

Once a possible contact has been identified, that person is told to get tested. Hidalgo estimates a positive patient will have had contact with 20 other people and ramped up testing capabilities — based on municipal drive-thru and mobile testing sites that can administer up to 1,600 daily — allows for each of those contacts to be tested.

With a finite supply of nasal swabs, the judge warned that the county can only handle up to 100 positive cases per day. A spike would jeopardize the supply.

“If we let our foot off the gas right now, the virus will inevitably come back, and it will come back as much force, if not more force, as before,” Hidalgo said.

Abbott’s plan allows Texans to return to public life about 10 days sooner than Houston health leaders had hoped. Hidalgo said the bolstered contact tracing plan was already in motion but the governor’s decision to lift some restrictions forced them to hasten.

She was not yet sure how much the tracing program would cost to expand outside of existing employees.

Hidalgo said last week she would only consider easing Harris County restrictions on movement and commerce once widespread testing became available and the virus has reached its peak here. Neither has happened.

The county’s health director has also asked Commissioners Court to approve 43 new full-time positions to assist in training the tracers.

“Our job then is to get to those individuals. That’s tough to identify who the contacts are with that individual and then be able to follow up with them,” Shah explained.

Hidalgo said the only real public health weapon Harris County has right now is social distancing, and urged residents to comply with her order requiring face coverings in public. Abbott on Monday struck down the portion of the measure that permitted fines of up to $1,000 for violators.

Hidalgo had urged law enforcement to use discretion when enforcing the order, and police said they would focus on distributing masks to bare-faced resident rather than citations.

About the Author: By Zach Despart and Nicole Hensley, Staff writers