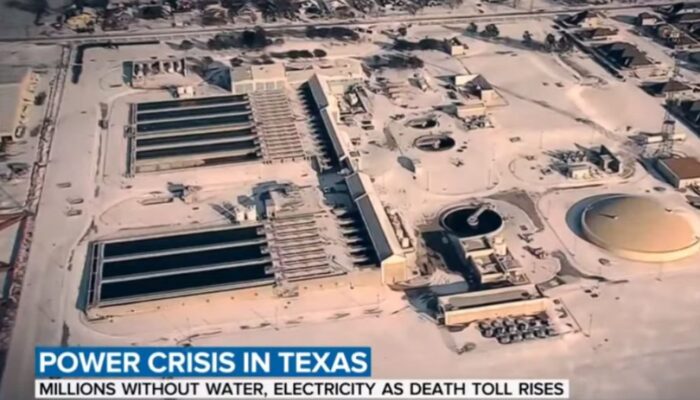 “Lives are already being lost because of Texas politicians’ refusal to acknowledge and prepare for the realities of the climate crisis.”

While Republican Sen. Ted Cruz of Texas is under fire for fleeing to Cancún for a vacation as his constituents endure devastating power outages as well as food and water shortages due to rare winter weather, climate campaigners are pointing to the compounding crises in the Lone Star state as proof of the need for a Green New Deal.

As dozens of people have died and millions have spent days without electricity, some right-wing news outlets and lawmakers—including GOP Texas Gov. Greg Abbott, who’s facing calls to step down—have lied about the state’s power problems, blaming renewable energy, even though the outages are largely tied to issues with gas, coal, and nuclear facilities. Abbott even claimed Tuesday on Fox News that “this shows how the Green New Deal would be a deadly deal for the United States of America.”

The Green New Deal resolution introduced in 2019 by Rep. Alexandria Ocasio-Cortez (D-N.Y.) and Sen. Ed Markey (D-Mass.) calls for creating millions of jobs by transitioning to a 100% renewable energy system and launching a “national mobilization” to build “resiliency against climate change-related disasters.” Although the measure has yet to be passed by Congress, Greenpeace USA and the Sunrise Movement argue that the current conditions in Texas—which scientists link to the climate crisis—bolster the case for it.

“Many people across the country are realizing for the first time that fossil fuels are not only polluting, they are unstable. Millions of Texans are being let down by coal, oil, and gas right now,” Greenpeace USA climate campaigner Ashley Thomson said Thursday. “Our greatest concern is for the communities facing record cold temperatures, power outages, and uncertainty.”

“Climate denial is not a victimless crime, and lives are already being lost because of Texas politicians’ refusal to acknowledge and prepare for the realities of the climate crisis,” she added. “We owe it to everyone impacted to help them recover and rebuild, and to do everything we can to fight for a more resilient and truly sustainable energy system.”

They lie through their teeth to deflect attention from massive fossil fuel failures.https://t.co/czPDBIEEvR

Not only is Texas still largely dependent on fossil fuels, but much of the state has its own power grid. The Electric Reliability Council of Texas (ERCOT), as Texan Samantha Grasso explained at Discourse Blog earlier this week, “was borne out of Texas’ brainless reflex to buck federal regulation.”

That move may now be part of the problem. As The Daily Poster noted, “Electricity market incentives are currently structured in such a way that Texas’ power companies receive more money if they don’t weatherize all their plants and shut down some of them during cold weather.”

As power slowly returned to homes and businesses in the southern state, Thomson declared that “in Texas and around the country, we deserve a world beyond fossil fuels.”

“Only a Green New Deal-style investment in our shared future can get us there,” she continued. “It’s time to fundamentally fix the grid so it can deal with the present and increasing impacts of the climate crisis. It’s time to make investments nationwide in clean energy jobs, climate jobs, and climate solutions—putting millions of people to work while we build the renewable energy infrastructure of the future.”

In addition to highlighting the Green New Deal, Thomson pointed to the THRIVE Agenda unveiled in September by a coalition of labor unions, advocacy groups, and Democratic members of Congress. The related resolution lays out an equitable and green economic recovery from the ongoing coronavirus pandemic.

Thomson’s comments came after the Sunrise Movement on Wednesday joined calls for Abbott’s resignation and reiterated the group’s demand for a Green New Deal.

“We deserve a government that addresses our basic needs and protects all of us in moments of crisis,” said Sunrise digital director Paris Moran of San Antonio. “Despite the lies you’ll hear from Gov. Abbott on Fox News, that’s truly what the Green New Deal is all about. Now is the moment to invest in resilient infrastructure, ensure a social safety net that protects all of us, and halt the climate crisis once and for all.”

As Republicans this week have attacked not only the Green New Deal but also Ocasio-Cortez, the congresswoman—known to many fans and foes as “AOC”—has called out Abbott, Fox News, and others while continuing to push for the renewable energy and jobs proposal that has boosted her national profile.

Republicans are so desperate to let fossil fuels off the hook, they’re blaming AOC and the Green New Deal — which hasn’t even happened yet — for something that’s happening in Texas RIGHT NOW. pic.twitter.com/HXwECXSdxL

In a campaign email to raise money for local relief organizations on Thursday, “Team AOC” responded to the Texas governor’s lies:

Let’s be clear about what’s really going on. The failure of fossil fuels and Republican governing caused the blackouts. Almost all of the outages were caused by non-functioning gas power plans. Yes, some wind turbines and solar facilities were affected, but on Monday while gas plants were freezing, wind and solar exceeded expected power delivery.

Only inaction and failed leadership are to blame for what’s going on. The lack of investment in our infrastructure is what got us here and this is an example of what to expect if we don’t pursue a Green New Deal.

While climate change accelerates, many electric grids will face extreme weather events like this that go beyond what they were designed to handle. We must help people now, and prepare our infrastructure for the future.

As climate campaigners and the congresswoman doubled down on their support for the Green New Deal, frontline organizations issued a demand for a just recovery—”an all-encompassing, community-based, solutions-oriented approach putting community needs and equity above profit in these times of climate chaos.”

The statement featured specific recommendations for organizers and organizations as well as foundations and philanthropists along with local, state, and federal officials.

“While our communities work to recover from Covid-19, massive job loss, and the current climate crises, now is the time for investments to move toward a just transition to rebuild clean water and energy infrastructure for our future,” the statement said. “We can put millions of people to work by creating locally controlled clean energy jobs, building new stable systems of power without pollution, and energy without exploitation. This is the time to build back fossil free.”

About the Author: Common Dreams