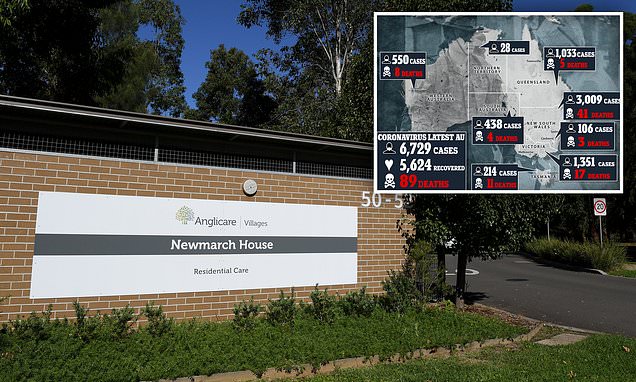 FOUR more residents at coronavirus-stricken nursing home die of COVID-19 – Australia’s death toll hits 88 Four residents at the Newmarch House in Penrith have died since 8pm last nightIn total, 11 have now died after contracting coronavirus from a staff memberThe employee was suffering mild symptoms when she worked six days straightAt least 54 cases, including 20 staff and 34 residents, have been identified so farHere’s how to help people impacted by Covid-19

Four more residents at an aged care home in Sydney’s west have died after contracting coronavirus, taking the nation’s death toll to 88.

In total, 11 residents at the Newmarch House in Penrith, at the foot of the Blue Mountains, have now died from the deadly respiratory infection.

The latest fatalities take Australia’s death toll to 88, while 6,729 people have been infected and at least 5,624 have recovered.

Anglicare Sydney, who operate the nursing home, released a statement on Tuesday.

‘This is a tragic time not only for the families who have lost their loved ones but for other residents and families,’ the statement read.

‘It is also taking a deep toll on our staff who cared for and knew these residents and families so well.’

So far, 11 residents of Anglicare’s Newmarch House (pictured) in western Sydney have died from coronavirus

Mary Watson, whose 93-year-old mother Alice has tested positive for COVID-19 in the facility, said residents were ‘dropping like flies’.

It’s heartbreaking that ‘Anglidontcare’ would just leave us in this predicament,’ she said. ‘People are dropping like flies, and we don’t know anything.’

‘I don’t want the last time I see my mum to be when she’s taking her last breaths.’

The outbreak at the facility was first identified just two weeks ago, after a staff member tested positive.

She is said to be ‘mortified and distraught’ that she had been the catalyst for the cluster, which spread rapidly through the vulnerable residents at the home.

Medical officials have called for workers, especially those who care for vulnerable people, to stay home if they feel even mildly ill.

A spokesman for the nursing home said on the basis of ‘the best advice available’, Anglicare believes the centre is still some weeks away from being completely free of the virus.

‘There has been one new case in a staff member at Newmarch House which brings the total to 54 cases, including 20 staff and 34 residents,’ Ms Chant told reporters on Tuesday morning.

‘This coronavirus pandemic has been unprecedented in terms of its scale and impact across the world,’ Anglicare chief executive Grant Millard said in a statement.

‘But more importantly we know what a devastating effect it is having on older people.’

The latest fatalities take Australia’s death toll to 88, while 6,729 people have been infected and at least 5,624 have recovered

About the Author: Brittany Chain