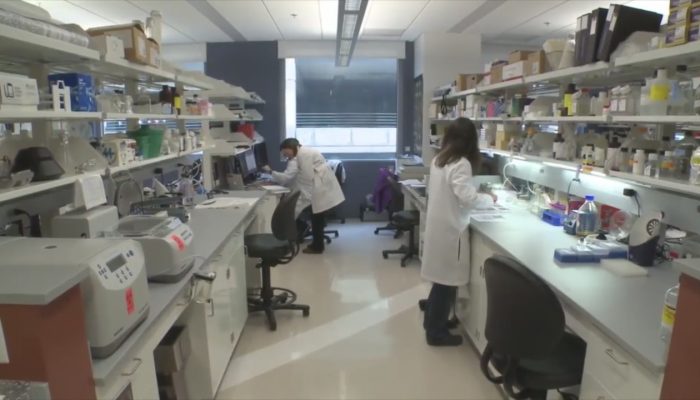 
While leaders are poring over data regarding the best time to reopen, scientists are gazing into their microscopes to see what might work to stop this virus.

There is a possible treatment from years of work to kill cancer. It is a drug that also appears to work against SARS-CoV-2.

Like so many scientists lending their brain power to the fight against COVID-19, University of Louisville Professor of Medicine Dr Paula Bates had an idea – and, thankfully, a drug she had already developed to treat different forms of cancer.

“As soon as I heard about the coronavirus and it became apparent it was a serious problem, I immediately started about what can I do to help and tried to find out as much as I could about the virus,” she said. “What we discovered, by chance, it was able to kill cancer cells without harming healthy cells. And we took it forward all the way to human clinical trials. And that’s why we’re excited about this recent discovery, is that this drug has already been tested in cancer patients. Those clinical trials suggested this is going to be a very safe treatment. The doctors who carried out those trials found the drug had very few side effects.”

The drug is a piece of synthetic DNA called an aptamer. It acts like an antibody by recognizing a protein on the surface of a cell – specifically, nucleolin. The drug binds to the protein, protecting the cell from being unlocked and invaded. Turns out that same protein plays a role when it comes to the novel coronavirus.

“We have done those proof of concept experiments where we have looked at cells infected with the new coronavirus and we found that this experimental drug is able to block the infection of those cells by the coronavirus,” Bates said. “Which in turn, we believe blocks numerous stages of the virus getting into the cell and replicating.”

The experiments were done at U of L’s biocontainment laboratory, one of only 12 regional and two national labs in the United States where researchers work with infectious agents, including SARS-CoV-2.

“The excitement is driven by the fact we believe this is going to be safe in humans, and we have shown, albeit only in a petri dish, it has some activity against the virus,” Bates said.

Bates believes the drug, delivered via infusion, could work two ways – as a therapy in newly infected patients to stop the virus from replicating and in those already severely ill to help reduce viral load.

“Speed is of the essence and we’ll do everything we can to make it happen sooner rather than later as long as we can get that approval from the FDA,” she said.

While the world waits for a vaccine new treatments are critical.

Bates and her team hope the FDA will fast-track approval so the drug can be tested in COVID-19 patients within a few months, a process that normally would take years.

About the Author: WGN Web Desk