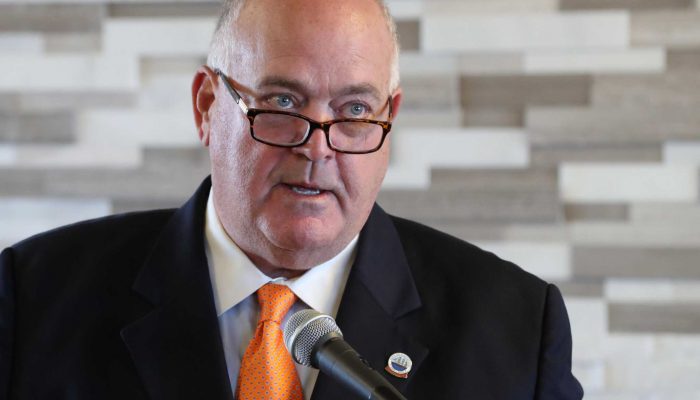 Galveston Mayor Jim Yarbrough is resigning from his position effective July 15, saying he believes the city needs a leader that can be there in person through the rest of the year.

Yarbrough, a Galveston native and Democrat who was first elected in 2014 and is term-limited, had planned to step down officially in July had Galveston not postponed its local elections in May due to the coronavirus pandemic. With the elections now pushed to Nov. 3 and Yarbrough still working remotely due to health concerns, he said he thought it was an appropriate time to step down as the city government began to conduct more of its operations in person.

“At the end of the day, I’m in good health but I have one lung, so I’ve been real serious about this (virus) and concerned for my personal health, which is why I’m still kind of in the shelter-at-home mentality,” Yarbrough said in a phone interview Friday. “Now we’re opening up and things are getting back to a more traditional way of life. We’ll soon be having committee meetings and (City Council) meetings in person versus Zoom, and I’m just not in a position to make those meetings and do that stuff.”

Mayor Pro Tem Craig Brown, a Democrat running to replace Yarbrough, will serve out the rest of Yarbrough’s term effective July 15. Yarbrough said while he is supporting Brown in the race to succeed him, he denied that Brown had any advance notice of his decision to step down. Yarbrough sent a letter to the City Council Wednesday night explaining his resignation, and said he only notified Brown hours before he sent the letter.

“He was given no heads up, it wasn’t a political plot to organize some deal here,” Yarbrough said. “I don’t think it helps Craig, people don’t like anything that looks like an anointment or a passing of the baton or any of that type of stuff.”

Still, Yarbrough acknowledged that Brown will have the advantage of giving the public a glimpse of his leadership style before the election. Brown is one of five mayoral candidates on the ballot in November. Since Yarbrough’s resignation is close enough to the November election, the city charter doesn’t require a special election to fill his post.

Yarbrough’s decision to step down in July was also influenced by the arrival of hurricane season, he said. Having served as Galveston County judge from 1995 to 2010, shepherding the county through the devastation wrought by Hurricane Ike in 2008, Yarbrough said his experience is that disaster management requires a physical presence that he is unable to provide during the pandemic.

“You don’t have the liberty of having somebody else going out and assess damage and look at stuff and call you back and contemplate it for a day or half a day and then make a decision,” he said.

With the state now continuing its phased reopening after a nearly two-month shutdown due to the coronavirus pandemic, Yarbrough said he was resigned to the fact that there was little more he could do on a local level to manage the virus response. Galveston was the first city in the county to institute a stay-at-home order, and the city also made the decision to close beaches to the public while the statewide stay-at-home order was in place.

“We’re not finished with (the virus) in my mind, but I’ve come to the conclusion that the heavy lifting on the part of local governments is done,” Yarbrough said. “If there’s any rebounds in (the virus) and any big decisions, it’s become clear to me they’re gonna be made out of Austin, not Galveston. I don’t agree with it but that’s where we are and that’s what we have.”

About the Author: Nick Powell