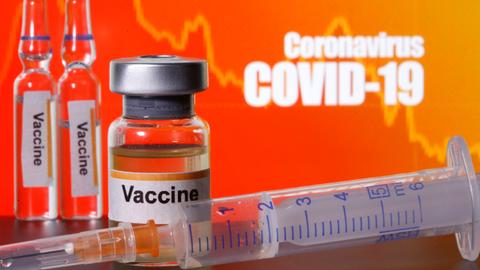 The global number of infections has passed 2.5 million. Here are the updates for April 22:

The death toll from the outbreak of the new coronavirus in Iran rose by 94 in the past 24 hours to 5,391, Health Ministry spokesman Kianush Jahanpur said in a statement on state TV on Wednesday.

Ukraine extends quarantine until May 11

Ukraine extended strong quarantine measures till May 11, hoping then to ease restrictions if there is a reduction in virus cases, Prime Minister Denys Shmygal said.

The trial, only the fourth worldwide of a preventive agent targeting the virus behind the global pandemic, will be conducted on 200 healthy people aged between 18 and 55 in the first stage, and on further people, including those at higher risk from the disease, in a second stage.

BioNTech said it was developing the vaccine candidate, named BNT162, together with its partner, pharma giant Pfizer.

Tests of the vaccine were also planned in the US, once regulatory approval for testing on humans had been secured there.

Spain’s death toll from the virus climbed by 435 in the past 24 hours, the Health Ministry said, roughly in line with the 2% increases reported in the past few days.

The health ministry also reported one new death, bringing the total number of fatalities up to 93.

The country has in the last seven days reported a lowered trend in both infections and deaths.

The official, Achmad Yurianto, said there were 19 new coronavirus deaths, taking the total to 635.

In a bulletin, the health ministry said total deaths have increased to 446 while infections have risen to 6,710.

But 39 more patients have recovered, bringing the total number of recoveries to 693.

Number of cases in Poland exceeds 10,000

The number of people infected in Poland exceeded 10,000, with the death toll reaching 404, the Health Ministry said on its Twitter account.

The ministry said the number of people infected rose to 10,034 in the country of 38 million.

On Monday, the government started to relax some of the restrictions imposed during the outbreak.

Fifty-seven people with the virus died in the last 24 hours, pushing the death toll to 513, it said.

Spain aims to phase out lockdown in second half of May

Spain’s Prime Minister Pedro Sanchez said his government plans to begin winding down lockdown measures in the second half of May.

Restrictions will be eased slowly and gradually to ensure safety,

Sanchez said at a parliamentary session where he will ask lawmakers to extend Spain’s state of emergency until May 9.

The lockdown was first enforced in Spain on March 14.

The health ministry said most of the cases were among migrant workers living in dormitories, a group that accounts for more than three quarters of the city-state’s infections.

Singapore authorities on Tuesday extended a partial lockdown until June 1.

One staff member at the institution had tested positive for the virus on April 16, prompting a test of its residents, Kyodo News said.

None of the eight children who tested positive were showing major symptoms such as a fever, Kyodo said.

Saiseikai Central Hospital, which runs the institution, could not immediately be reached for comment.

Japan relies on institutional care for the majority of children who cannot live with their parents for reasons such as abuse and neglect.

Iceland will inject an additional $420 million into the economy with a package of measures to help smaller businesses and vulnerable groups recover from the lockdown, the government said.

Jobseekers and low-income families will get extra help, and companies that have had to halt operations will be compensated, the government said. Smaller businesses will be offered immediate supports loans, it added.

“Today’s announcement reflects our priorities to protect jobs, embrace our people and look to the future,” Prime Minister Katrin Jakobsdottir said in a statement.

Despite the slowing of new cases, officials remained cautious.

“The lower numbers are a small success … but we cannot let our guard down,” said Taweesin Wisanuyothin, a spokesman for the government’s Centre for Covid-19 Situation Administration.

The new fatality reported on Wednesday was a 58-year-old Thai woman who had diabetes and high-blood pressure as underlying diseases, said Taweesin.

Thailand has a total of 2,826 confirmed cases and 49 deaths.

According to Worldometre tracker figures, Germany had 150,690 cases and 5,367 deaths.

It’s now the fourth highest in terms of cases in Europe.

Second wave may be even worse: US health chief

A second wave of the virus in the US could be even more destructive because it will likely collide with the beginning of flu season, one of the country’s top health officials said.

Robert Redfield, director of the Centers for Disease Control and Prevention (CDC), called on Americans to use the coming months to prepare, and get their flu shots.

“There’s a possibility that the assault of the virus on our nation next winter will actually be even more difficult than the one we just went through,” he was quoted as saying in an interview with the Washington Post.

“We’re going to have the flu epidemic and the coronavirus epidemic at the same time,” he said.

US virus deaths topped 45,000 doubling in a little over a week as cases climbed to over 800,000, according to a Reuters tally.

US has by far the world’s largest number of confirmed cases, almost four times as many as Spain, the country with the second-highest number.

Globally, cases topped 2.5 million, with North America accounting for one-third of all cases.

Deaths increased by more than 2,600 alone with a few states yet to report.

New Jersey, Pennsylvania and Michigan each reported their highest single-day death tolls, over 800 between the three states.

New York state, the epicentre of the US outbreak, reported 481 new deaths.

Virus fatalities in the US hit a peak of 2,806 on April 15, the deadliest single day of the epidemic.

Mainland China reported 30 new cases, 23 of which were so-called imported cases involving travellers from overseas, up from 11 a day earlier.

The National Health Commission said in a statement the number of new asymptomatic patients, who are infected with the virus but not showing symptoms, also rose to 42 from 37 a day earlier.

A total of 82,788 cases have been reported to date in mainland China, while the number of deaths remained unchanged at 4,632.

Mexico registered a jump of more than 700 confirmed cases to reach a total of 9,501 cases, health ministry officials told reporters at a regular briefing.

Reported deaths from the highly contagious respiratory disease caused by the virus stand at 857, or 145 more than the previous day.

The US Senate approved a bipartisan, $480 billion emergency package that replenishes a depleted program to help devastated small businesses, funds hospitals and ramps up nationwide testing during the crisis.

The measure, which passed by unanimous consent after more than a week of negotiations between Democrats, Republicans and the White House, now heads to the House of Representatives where a vote could occur as early as Thursday.

The effort is the government’s latest massive cash injection to prop up a collapsing economy amid struggles to contain a pandemic that has killed 43,000 Americans and left some 22 million people jobless.

Turkey has so far evacuated 2,043 citizens from all over the world amid the pandemic.

At the instruction of President Recep Tayyip Erdogan and in coordination with the Foreign Ministry, Turkey decided to bring back nearly 25,000 citizens before the Muslim fasting month of Ramadan.