Home Covid Clinical Studies Gilead expects to spend up to $1 billion on coronavirus drug this year, will donate 1.5 million vials 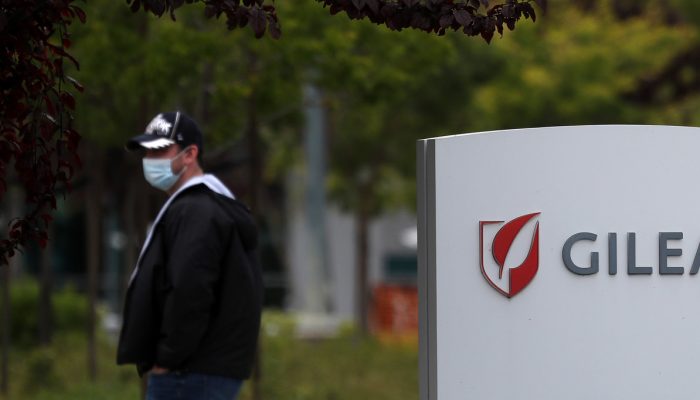 Gilead Sciences Inc. reported better-than-expected earnings for the first quarter on Thursday and detailed more of its work on remdesivir, an antiviral COVID-19 drug candidate.

While remdesivir was immaterial to Gilead’s
GILD,
-6.51%
first-quarter earnings performance, the drugmaker said in its announcement that R&D expenses increased about $100 million from last year, in part due to ongoing development of the therapy as a COVID-19 treatment. It cited $50 million for the manufacturing scale-up and costs of clinical trials for remdesivir, though that increase was tempered by the temporary halt of clinical trials for other investigational therapies as a result of the COVID-19 pandemic.

The bulk of Gilead’s earnings call with investors focused on remdesivir and the company’s view on how the pandemic may impact sales of its HIV drugs in the second quarter. Executives said that “the potential range” of its remdesivir development costs could reach $1 billion in 2020.

Analysts also answered questions about the potential cost for remdesvir if it receives marketing approval or an emergency-use authorization from the Food and Drug Administration.

“Under the emergency-use authorization, one could charge for the product,” CEO Daniel O’Day said on the call. “We made a decision, as you know, to donate 1.5 million vials, which is the entirety of our supply through the early summer.”

Gilead has told investors that it plans to have more than 140,000 treatment courses of remdesivir prepared by the end of May. O’Day later said donating the investigational therapy “is the right thing to do at this time.”

Analysts remain skeptical about the financial benefit of remdesivir, with SunTrust Robinson Humphreys analysts saying before the earnings call that it is unclear whether Gilead will charge for the drug, if authorized or approved by the FDA, and how they would price the therapy if they do charge for it. SVB Leerink’s Geoffrey Porges wrote in a note on Wednesday that the drug still has “limited economic value to the company and the stock.”

Remdesivir may be near regulatory authorization in the U.S., unnamed sources told the New York Times, following early data readouts this week for a pair of clinical trials evaluating the drug as a COVID-19 treatment. One trial, which is being conducted by the NIAID, reported that the drug improved recovery times compared with patients taking a placebo.

Company executives also said they are looking into developing inhaled or subcutaneous forms of remdesivir for COVID-19 patients. The drug, which is currently delivered to patients using intravenous infusion, will not be tested as an oral treatment.

The company reported first-quarter earnings of $1.5 billion, or $1.22 a share, in the first quarter of 2020, down from $1.9 billion, or $1.54 a share, in the same quarter a year ago. Revenue grew to $5.5 billion in the first three months of the year, up from $5.3 billion in the year-ago period. Adjusted earnings per share were $1.68. Analysts surveyed by FactSet had estimated adjusted earnings of $1.59 per share on revenue of $5.4 billion.

The results, announced after the market’s close Thursday, initially sent Gilead’s stock down 0.9% in after-hours trading. The stock closed with a 1% increase at $84 Thursday, after a 5.8% gain Wednesday following the release of the remdesivir study data and public support from Dr. Anthony Fauci, the director of the National Institute of Allergy and Infectious Diseases.

The company’s HIV drug portfolio, which made up 74% of total sales last year, is anchored by Biktarvy, a drug that received FDA approval in 2018 and has since generated billions of dollars in sales. Gilead said Biktarvy sales rose to $1.7 billion in the first quarter, up from $793 million in the same quarter in 2019. The FactSet consensus was $1.5 billion.

The company’s HIV product sales were $4.1 billion for the quarter, up from $3.6 billion in the first quarter of last year, driven by the Biktarvy uptick and increased consumer purchases as a result of the COVID-19 pandemic.

Like many of the pharmaceutical companies that have reported earnings so far this year, Gilead reported an uptick in quarterly sales as patients sought to stockpile drugs in advance of stay-at-home orders. However, Gilead said that the pandemic could lead to fewer patients accessing treatment and prescriptions for HIV or hepatitis C, which could hamper sales of the drugs it markets for those diseases in the second quarter of 2020.

RBC Capital Markets’ Brian Abraham said in a note Thursday evening that the company has a “sustainable and well-insulated HIV franchise” and Biktarvy “continues to impress.”