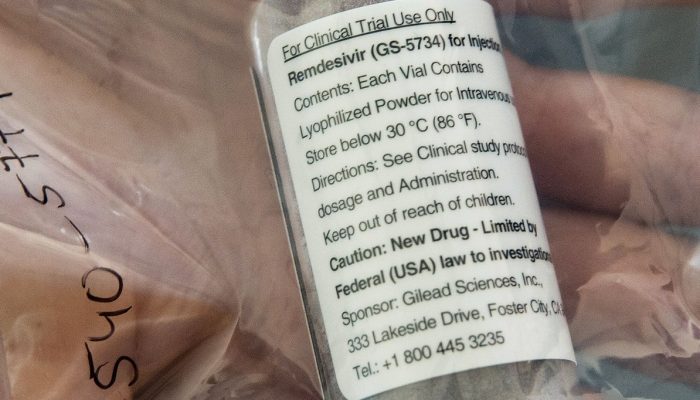 Gilead Sciences Inc. said that its experimental COVID-19 therapy remdesivir met the main goal in a government-funded clinical trial and that a shorter dosing regimen was as successful as a longer one in a separate study.

The early findings set the stage for the closely watched drug to move toward a possible emergency use authorization or approval from the U.S. Food and Drug Administration. The drug is currently being used on an expanded use or compassionate use basis.

However, some analysts say that while the data is promising additional details are needed to better determine remdesivir’s efficacy. “It seems like remdesivir is active and has a favorable impact in COVID-19,” Mizuho Securities analyst Salim Syed wrote in an investor note on Wednesday. “We still don’t know the details around the NIAID trial’s results, and this will be the next key question.”

Shares of Gilead
GILD,
+4.65%
gained 5.7% in trading on Wednesday following the news announcement.

Remdesivir is widely considered to be a front-runner among the investigational therapies being tested as treatments for infections caused by the novel coronavirus, which has sickened more than three million people and killed at least 217,000. There are no proven treatments or vaccines.

Gilead’s stock has had a turbulent few weeks as media outlets have reported on leaked data, both positive and negative, from some of the many clinical trials under way evaluating the drug.

Gilead said an open-label Phase 3 trial testing the therapy in 6,000 severely ill patients found that those taking a 5-day or 10-day course of treatment led to similar results. At least 52% of participants taking either dosing regimen were discharged from the hospital after 14 days of treatment, and at least 53% of those patients were reported as reaching “clinical recovery.”

“Multiple concurrent studies are helping inform whether remdesivir is a safe and effective treatment for COVID-19,” Gilead chief medical officer Merdad Parsey said in a statement. “The study demonstrates the potential for some patients to be treated with a 5-day regimen, which could significantly expand the number of patients who could be treated with our current supply of remdesivir.”

Minutes before this top-line data was released, Gilead said that a National Institute of Allergy and Infectious Diseases clinical trial evaluating remdesivir in hospitalized COVID-19 patients met the study’s primary endpoint. The federal agency is expected to provide additional information about that trial, Gilead said. The primary outcome in this trial is recovery by 29 days of treatment, according to the study’s listing on ClinicalTrials.gov. This trial is considered more important in that it has a placebo-controlled arm, while the Gilead-sponsored Phase 3 trial in severely ill patients does not.