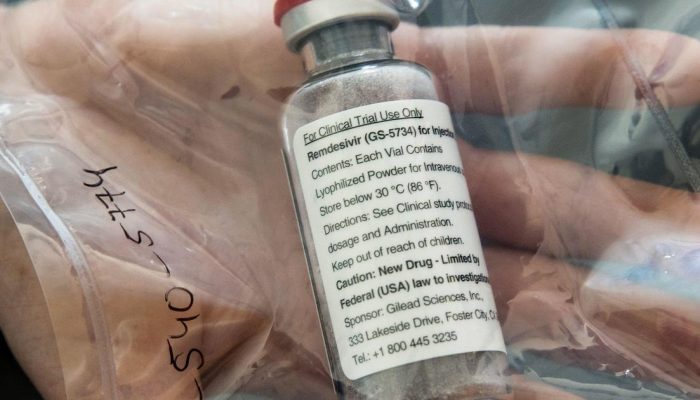 U.S. stocks rallied on Friday, with investors buoyed by a promising early report about Gilead Sciences’ experimental drug remdesivir’s impact on COVID-19 patients. Wall Street is also optimistic that parts of the economy could start to reopen soon.

Gilead Sciences shares jumped more than 10% in early trading after a clinical trial of remdesivir on severe COVID-19 patients reportedly resulted in quick recoveries from the disease’s symptoms. Almost all the patients in the study were discharged in less than a week, according to the report in medical business publication Stat.

Investors are also optimistic about portions of the U.S. economy reopening for business after President Donald Trump released guidelines for getting people back to work that favored local governors’ decisions over any federal mandate.

“In a week of negative economic headlines, it’s certainly encouraging to end on a more positive note and equity markets are surging this morning as a result,” Craig Erlam, senior market analyst at OANDA Europe, wrote in a client note. “The double whammy of U.S. lockdown exit plans and, more importantly, a potential coronavirus treatment from Gilead has given investors cause for optimism heading into the weekend.”

The White House plan, called “Opening Up America Again,” is expected to put much of the onus on states to develop sufficient testing and contact tracing systems. It also lists basic “gating” criteria a state or region should reach before beginning to send people back to work and school. Mr. Trump relayed the guidelines on a Thursday afternoon call.

At his daily press briefing Thursday evening, Mr. Trump said, “We’re starting our life again. We’re starting rejuvenation of our economy again,” adding that, “This is a gradual process.”

Even so, much of the U.S. remains on lockdown, and more than 22 million Americans — or 1 in 7 workers — have lost their jobs in the last month alone. Economic data for March “indicates an earlier and larger hit to activity than we had anticipated,” Oxford Economics said in a Friday report. “Retail sales and industrial production data points to a severe collapse in spending and output in the final two weeks of March.”

The Gilead trial of its remdesivir drug involved 125 people with COVID-19 through the University of Chicago Medicine. All of them were treated with daily infusions of the drug, and most of the patients were discharged from the hospital, Stat reported, citing comments from Kathleen Mullane, the University of Chicago infectious disease specialist who is overseeing the study. She said that two patients died.

To be sure, the results are still early and are part of a larger study of patients at other institutions, with Gilead yet to release full results.

In a statement to Stat, Gilead said, “What we can say at this stage is that we look forward to data from ongoing studies becoming available.”