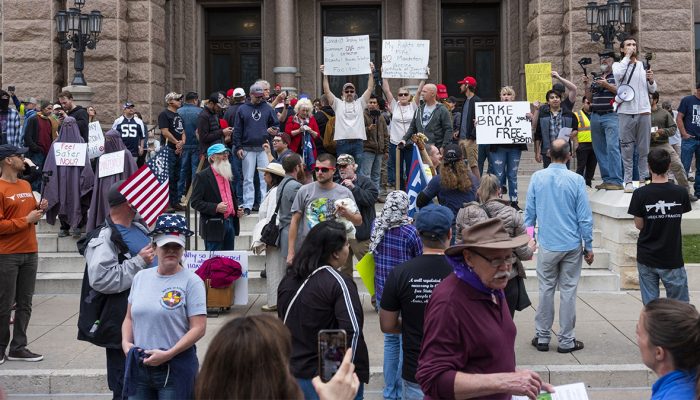 Protesters gathered at the State Capitol Saturday to call for the reopening of the state amid the coronavirus pandemic | Photo: Alex Scott | Bloomberg

New Delhi: With more than 24 lakh cases of Covid-19 and over 1,64,000 deaths, the world is reeling under the pandemic with countries following various degrees of restrictions and lockdown measures to curb the virus.

ThePrint brings you the top stories from a pandemic-hit world:

Anti-lockdown protests and social unrest are being witnessed in several countries marking a potentially steep rise in poverty and inequality, notes a report in the Washington Post. These demonstrations have taken place in developing countries such as Kenya and Lebanon and countries like US and Italy as well. Conservative groups are organising anti-lockdown protests in several US states. Hundreds of people gathered in Colorado Sunday to protest against the coronavirus stay-at-home orders.

Italy, on the other hand, has been struck by a major crime wave since some restrictions were eased in the southern parts of the country.

Things could be really grim for the poorest countries, according to the International Labor Organisation, nearly 2 billion people across the world depend on daily work to survive.

“A recent study by a U.N. think tank, the World Institute for Development Economics Research, warned that 500,000 people could slide into absolute poverty as a result of the pandemic’s restrictions, reversing three decades of progress in the war against poverty,” said the report.

According to The New York Times, nearly 40 staff members of Afghanistan’s presidential palace have tested positive for the novel coronavirus. While there is no official confirmation whether President Ashraf Ghani has been tested for the virus, NYT reports that he has isolated himself and is managing the country’s response to the pandemic via videoconferencing.

Afghanistan has reported just under 1,000 cases but officials say the number may be much higher as only 7,000 tests have been conducted in the country.

Also read: ‘Everything is fragile’ — how two refugees see the world during the Covid-19 crisis

The decrepit northern region of Komi in Russia has emerged as a new Covid-19 hotspot and the government is responding to the situation by ordering an information gag in the region, according to a report in The New York Times. “The police summoned critics of the regional government to ask how they knew about an outbreak in a hospital at a time when officials in Komi were insisting nobody had been infected,” noted the report.

Amid reports of faulty data and reporting, Russia has recorded nearly 43,000 cases of coronavirus and the official death toll stood at 364.

A report in the Financial Times notes that Prime Minister Boris Johnson’s cabinet is split on the question of gradually lifting lockdown restrictions. While Finance Minister Rishi Sunak and Cabinet Office Minister Michael Gove are arguing in favour of swifter removal of restrictions, Health Minister Matt Hancock is suggesting a more cautious approach. Johnson’s key political aide Dominic Cummings sides with Hancock, and Mark Sedwill, the country’s top bureaucrat, is in the Sunak-Gove camp — complicating the matter further. UK now has over 1.2 lakh coronavirus cases and has recorded 16,000 deaths.

Disagreements over lockdown and testing increase between Trump and governors

The Guardian reports that in a charged press briefing, US President Donald Trump seemed to extend his support to the anti-lockdown protesters across the country, exacerbating the brewing crisis between the president and various governors.

While Trump said that the onus of more testing lies with the states, the state governors, in turn, have accused the federal government of inaction, according to Washington Post. However, some southern states such as Texas are planning to gradually lift sanctions, adhering to Trump’s advice.

Also read: How Trump is dividing America as virus lockdown begins to hit his re-election campaign

With more than 86,000 cases, Turkey now has the highest number of cases outside US and Europe, according to a Reuters report. The country has not only emerged as the Middle Eastern hotspot but has more cases than even China — where the infection originated. According to another report by CNN, age-specific restrictions, weekend lockdowns, poor communications strategy, and its own arbitrary medical rationales are responsible for the spike in cases.

As the US presidential election between the incumbent Donald Trump and Democrat candidate Joe Biden nears, the question in everyone’s mind is whether the president can beat the odds and emerge as a victor. This is the question, US magazine Politico’s cover story, “Trump’s Greatest Escape”, tries to tackle. It argues that for the past 25 years, Trump has managed to stage a comeback, over and over again, against everyone’s expectations. The story further argues that Trump has been preparing for this moment all his life and he has always been successful in transforming narratives to his advantage.

Mexico’s corporate establishment has decided to back outsiders and political newcomers in the elections scheduled next year, in an effort to weaken President Lopez Obrador, reports Reuters. “Lopez Obrador has alarmed investors with idiosyncratic policymaking since taking office. Now, his reluctance to help companies through the coronavirus pandemic with relief measures has pushed even business allies to vent their frustration,” notes the report.

“With sales plummeting during the shutdown, executives are furious that instead of giving them more time to pay their tax bills, Lopez Obrador has accused companies of exploiting the crisis to fire workers, and said there will be no bailouts for the rich,” it adds.

The protest included “speeches by prominent lawmakers from the center-left bloc,” noted the report.

ThePrint is now on Telegram. For the best reports & opinion on politics, governance and more, subscribe to ThePrint on Telegram.