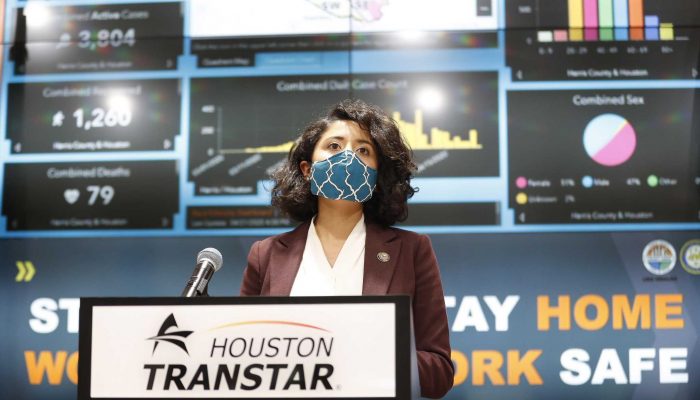 Hotze, who also sued Hidalgo over her stay-at-home directive, said in a petition filed in state district court that the mask rule is at odds with a provision of the Constitution that gives the Legislature “exclusive authority to define crimes and to designate the punishments for those crimes.” The petition also contends that Hidalgo cannot issue more restrictive orders than Abbott, who has not mandated that Texans wear masks in public.

Hidalgo’s order, issued Wednesday, aims to slow the spread of the coronavirus and will require residents 10 and older to cover their nose and mouth when outside. The rule takes effect Monday, lasts 30 days, and allows scarves, bandanas, handkerchiefs and homemade masks. Those who violate the rule are subject to a fine of up to $1,000, though Hidalgo said law enforcement officers have discretion in enforcing the rule.

“So far, they’ve been prioritizing education with all these orders,” Hidalgo said Wednesday. “Folks have been fantastic, but we did want to make them enforceable.”

Robert Soard, the first assistant county attorney, cited Section 418.108 of the Texas Government Code, which gives the county judge the authority to declare a disaster in her jurisdiction and to “control the movement of persons and the occupancy of premises in that area.” That authority extends to the incorporated and unincorporated parts of the county.

Soard said Hidalgo has authority to issue the mask order under that provision and another that allows her to “exercise the powers granted to the governor” for emergency management, including issuing local executive orders that “have the force and effect of law.”

In the petition, Hotze also challenged the part of Hidalgo’s order that requires people to wash their hands before leaving their residence, and stay six feet away from each other and avoid touching their face in public. Hotze argued the section of state law that governs disasters “does not contain any language forcing private citizens to” perform the actions in Hidalgo’s order.

Hotze’s first lawsuit against Hidalgo, filed at the Texas Supreme Court with three local pastors, has now moved to state district court after the high court dismissed the suit at the plaintiffs’ request. They are challenging the stay-at-home order’s restrictions on church services, even after Hidalgo amended it to square with Abbott’s order that defines churches as “essential.”

Hotze and the pastors also have sued Abbott and Attorney General Ken Paxton, alleging the governor’s order does not go far enough in allowing churches to operate during the pandemic.

CORONAVIRUS CHRONICLE: Subscribe to our new daily podcast for pandemic insights through a Houston lens