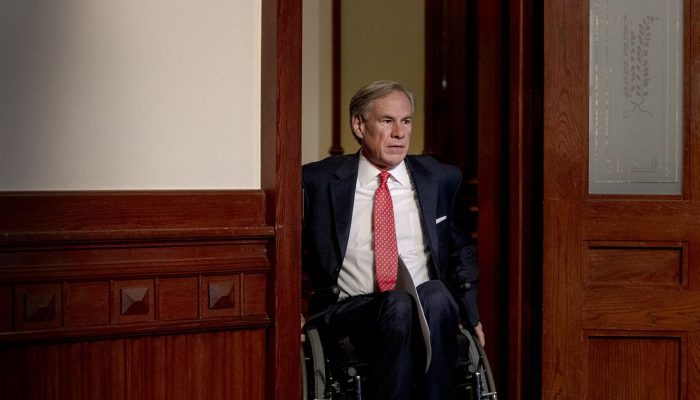 Updated at 7:45 p.m.: Revised to include statements from Dallas County Judge Clay Jenkins.

AUSTIN — Gov. Greg Abbott on Monday said his statewide stay-at-home order on coronavirus will expire on Thursday as scheduled, while Texas malls, stores, movie theaters and restaurants may open the next day — with 25% occupancy.

Outdoor sports such as golf and tennis may resume with no more than four participants in a match, and they must observe social distancing guidelines, he said.

Businesses will be free to choose not to open, and in less populated counties with five or fewer confirmed cases, they will be able to open at 50% capacity, he said.

Museums and public libraries may reopen, again with the 25% capacity limitation, though they’re not required to, Abbott said. Saying they want to be as cautious as possible, both the Dallas Museum of Art and Nasher Sculpture Center said Monday they have no plans to reopen Friday.

The Republican governor “strongly” recommended that Texans wear masks while in public. However, he said local requirements imposed by Democratic-controlled commissioners courts in Dallas and Harris counties — as well as elsewhere — are superseded by his new orders. No one can be fined by a locality for not wearing a facial covering, he said.

“Opening Texas must occur in phases,” Abbott said. “Obviously, not all businesses can open all at once. A more strategic approach is required to ensure that we don’t reopen only to have to close down again.”

Dallas County Judge Clay Jenkins, who has publicly sparred with Abbott throughout the crisis, said told CNN Monday night that the governor’s plan was moving faster than he’d like.

In a later statement, he said he had asked Dallas County Health and Human Services Director Dr. Philip Huang and infectious disease and epidemiology specialists, from area hospitals to review Abbott’s orders. He said that he would work with local businesses to develop rules to help enforce social distancing including the 25% capacity limit for the businesses that will reopen on May 1.

Jenkins said it was incumbent upon residents to use their best judgment as Texas enters the next phase of the fight against the coronavirus.

“Most other plans that open businesses in phases don’t put places like movie theaters in the first group to open,” he said in the statement. “The orders have changed but the science that will keep us safe has not. I believe North Texans will focus not on ‘what can they do’ but rather ‘what should they do.’ It will be imperative for North Texans to make good choices particularly where these orders veer from the advice of public health experts. Following science is the best way to keep safe and open the economy.”

Dr. Mark Casanova, president of the Dallas County Medical Society, had not completely reviewed Abbott’s plan. However, he said, based on reports he had seen, it could “theoretically” work. “The key is going to be testing capacity,” he said.

And it remains to be seen how many restaurants will reopen, or how many patrons they will attract. Despite a handful of protests that have cropped up in Dallas and Austin, recent polls have found a majority of Americans support social distancing restrictions.

Abbott said loosening restrictions he imposed in recent weeks to halt the spread of the lethal virus is the reward for impressive compliance by Texans with his requests for self-isolation and social distancing.

“The price has been steep,” as many Texans lost jobs and can’t pay their bills, he said.

While he’ll continue to stress social distancing and rely on doctors for advice, Abbott said he’ll keep tight protections of “the most vulnerable,” such as nursing-home residents, while letting many others exercise more discretion as to what is safe in the age of COVID-19.

For instance, he lifted most restrictions on doctors, dentists, nurses and other health care professionals, saying they need to get to work, though they must follow the COVID-19 protocols recommended by their licensure boards. Hospitals must reserve 15% of their capacity for coronavirus cases.

Texas Values President and Attorney @jonathansaenzTX said: “We are thankful that important steps have been taken to open more portions of the Texas economy and that Governor Abbott has confirmed that churches can have in-person services.” #txlege

He waved at the child-care problems of Texas workers, with schools closed and summer camps disrupted. He said the state is giving “speedy attention” to the need to gin up more day-care seats.

But Abbott said business-friendly Texas must take the wraps off free enterprise.

“It’s entrepreneurs who drive the Texas economy,” he said. “They need to be unleashed.”

Speaking of the greater freedoms, Abbott urged, “We are Texans. We got this.”

In the first, which begins Friday, many establishments, including virtually all types of retailers, may operate at 25% capacity.

In phase two — with a start date around May 18 — those businesses could open to 50% capacity if there is not a new outbreak. The state will monitor positive cases, in addition to any rises in hospitalizations or deaths, Abbott said.

“Essential businesses” such as grocery and hardware stores have already proven that strategy effective by using that model to remain open during the stay-at-home order, Abbott said.

Though the state has lagged others in the amount of testing, Abbott staked out a goal of testing at least 25,000 Texans each day.

John Hellerstedt, leader of the Department of State Health Services, said the federal government has committed to solving supply chain problems that limited the state’s ability to test. The first — and only time — the state’s daily testing tally broke 20,000 was on Saturday. So far, most of the tests have been reserved for those with symptoms.

“We believe that we have within our grasp the ability to do 26,000 a day,” Hellerstedt said. “It’s not just about the testing. … we are putting in place and beginning to make more robust every day our contact tracing capability.”

The state has plans to bring on more than 1,000 new people to track down those who have had contact with people carrying the virus and in Phase 2 will employ another 1,000 “tracers,” Hellerstedt said. By Phase 3, he hopes there will be 4,000 deployed. The cost and where they will be stationed is not yet clear.

Abbott, asked how he’ll measure success, said he won’t just look at the number of confirmed cases because testing will be increased.

“That alone is not a decisive criterion,” he said.

The state will take a more holistic approach, monitoring hospitalization rates and death rates, Abbott said. There also could be regions that are harder hit and should be separated from statewide rules, he said.

“There’s no one single factor we look at, we look at all of the data and consider what the data means,” he said. “Through that we make a decision about whether or not we can go into Phase 2.”

Governor Abbott’s leadership during this crisis has been weak and erratic, motivated more by politics than public health.

Texans should follow CDC guidance and continue to do our part to keep people safe by staying home for now and practicing social distancing. https://t.co/1NgbvZ0ZZG

Asked whether he grasps how disappointed owners of personal-care establishments such as hair-cutting businesses will be with his decision, Abbott said he does.

“We want hair salons and barber shops to open up ASAP,” he said. “But the fact of the matter is, they remain very physically close to each other. I realize that we’ll be wearing masks, but the goal is just to find safe ways in which people can work in close contact with customers, while preventing the spread of COVID-19. We think we have some potential solutions. Let us continue to work on it.”

The tightest restrictions will remain for institutions with elderly and disabled people, he noted.

“Our state leaders and their appointed economic recovery task forces have mapped out a thoughtful strategic and safe plan to get Texas’ businesses open,” he said in a written statement.

The voluntary order was being absorbed by retailers and shopping centers late Monday.

“We anticipate that not all stores will reopen at once, with openings staggered based on” state and local regulations, said Jacqueline King, a spokeswoman for Macy’s, which operates 38 stores in Texas, including 13 in D-FW.

Dallas-based Neiman Marcus and Plano-based J.C. Penney didn’t have an immediate response. Both retailers had started operating Friday under Abbott’s phased-in retail-to-go option after being closed since mid-March.

Department stores have their own entrances and parking lots, so they don’t have to wait for a mall to reopen, but most anchor stores are likely coordinating their plans with mall owners.

A spokeswoman for NorthPark Center said the mall hopes to have an initial plan for reopening soon.

Casanova, the Dallas County physicians’ group leader, said the problem is more testing is needed to identify people who are asymptomatic. Tracing will also be an important role to identify which types of behavior or setting lead to spikes, he said.

And “the message for the public can’t be emphasized enough,” Casanova said. “If you’re at high risk, stay home. If you can work from home, do so. Think about your outings.”

Although the state on Friday launched a website to help Texans learn where they may be tested, Anne Dunkelberg of the center-left think tank the Center for Public Policy Priorities faulted state leaders for not educating residents about how Congress has given the states’ money for uninsured people and unauthorized residents to get free tests.

“Most Texans don’t know this, and as a result, too many continue to pay for tests that should be free,” she said. “Even worse, uninsured and non-citizens in Texas who need testing may avoid it because they hear about bills in excess of $200, or out of fear that free testing will be denied to non-citizens.”

Rep. Celia Israel, D-Austin, said Abbott did not address how workers who had to take care of their children or elderly parents during the pandemic were supposed to juggle that with returning to work.

Children are not returning to schools and nursing homes are hot spots for the virus, she noted.

“If they are being called back to their retail job, what’s going to happen to their unemployment benefits?” Israel said. “The Texas worker has been of course hurting through all of this and I want assurances for them that support will still be there for them.”

“The plan is not actually based on data or science,” he said.

But Abbott has faced pressure to relax his orders for isolation and staying at home.

On Monday, Kevin Roberts, president of the free-market-oriented Texas Public Policy Foundation, hailed Abbott for striking the right balance between science and the economy.

“The governor has given the state a strong signal that our economic prosperity is not just as important as our health but critical for our health,” he said in a written statement.

“Decisions on opening Texas will be made based on the best possible data, which so far has us moving in the right direction,” Roberts said. “And he sent an equally significant message that local overreach will not be tolerated as Texans begin to get their lives back on track.”