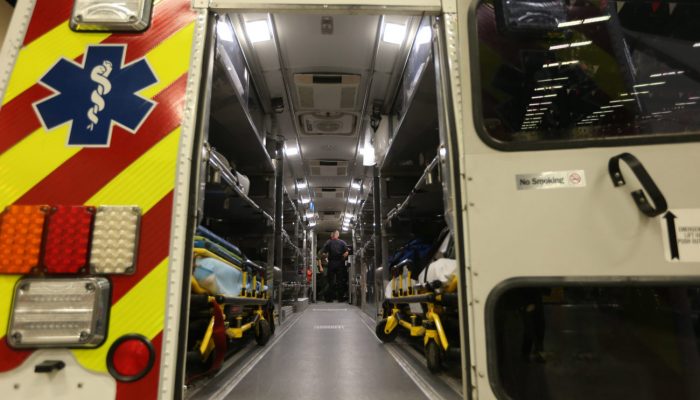 HARLINGEN — City Commissioner Frank Puente is counting on Gov. Greg Abbott’s order to temporarily open the city to other ambulance companies amid the coronavirus outbreak.

On Wednesday, commissioners are set to meet behind closed doors to discuss a request by Puente and Commissioner Richard Uribe to temporarily lift a city ordinance’s restrictions banning other ambulance companies from entering the South Texas Emergency Medical Services Foundation’s service area.

Since January, Puente has pushed to revise the ordinance banning other EMS providers from offering non-emergency transport within STEC’s service area stretching across much of Cameron County.

For 40 years, STEC, a nonprofit organization founded by city leaders, has held its contract giving it exclusive rights to serve the area.

“I’m thinking specifically about the safety of my constituents,” Puente said. “Unfortunately, others seem to view it as a numbers and profit game.”

On April 2, Abbott issued an order which “suspended regulations to increase the amount of emergency medical services workers and first responders in Texas during the state’s response to COVID-19,” a Texas Division of Emergency Management report states.

During Wednesday’s meeting, commissioners are set to meet with City Attorney Ricardo Navarro’s firm to discuss “the city’s rights, duties, privileges and obligations pertaining to the existing franchise license agreement for the provision of emergency medical and transport services by the South Texas Emergency Care Foundation and related legal issues between STEC and the city of Harlingen, Texas.

Puente said he’s requesting the city lift the ordinance’s ban on other EMS providers for six months or until Abbott’s order expires.

“We want them to list the ban on offering other services,” Puente said. “All we’re asking for is a backup for STEC. We want to allow at least one or two other emergency services to offer services in this entire area STEC serves. For the safety of my constituents, I want a choice. I want them to be able to call whoever they want.”

But STEC officials argue allowing other ambulance companies to enter the service area would become “disruptive.”

“In the absence of any evidence that additional ambulance companies from outside are required or would be helpful, we believe that the action proposed by the commissioners is unnecessary and could actually be disruptive and cause the opposite of the intended result,” STEC President Jo Rae Wagner and Executive Director Bill Aston stated in a press release late Monday afternoon.

Meanwhile, attorney Randy Whittington, who represents STEC, says the number of EMS calls has dropped as a result of the state and local shelter-in-place orders mandating residents stay home to prevent the spread of the virus.

STEC officials also stated in the press release, “We have been able to concentrate our resources on COVID-19 calls and patients …, evaluating, testing, isolating and quarantining patients with suspected signs or symptoms of COVID-19 in their homes so they can avoid being hospitalized unless necessary.”

“Since the first COVID-19 case was discovered in Harlingen, STEC has been working hand-in-hand with the professional staff of Harlingen, state and local public health officials, Harlingen hospitals and community physicians and healthcare providers.”

“STEC has been a leader is organizing and implementing a coordinated network to respond to the growing number of infections. No one has suggested that STEC lacks the capacity or resources to address the community’s needs at this critical time.”

As part of Wednesday’s meeting, STEC is set to make a presentation aimed an addressing some of his questions, Puente said.

“We need to ask some specific questions about this contract,” he said.

Puente said he wants to STEC to disclose its average emergency response times.

“Most of the time the fire department shows up before STEC,” he said.

Now, he said, STEC’s requested the fire department not to respond to EMS calls until the ambulance company calls it in.

In February, STEC officials put their average response time was 7 minutes and 40 seconds, “significantly lower and better than those national standards,” they stated.

“Although there are no laws or regulations mandating response times, generally recognized national standards for response times for cardiac arrest and stroke published by various organizations range from eight to nine minutes,” they stated.