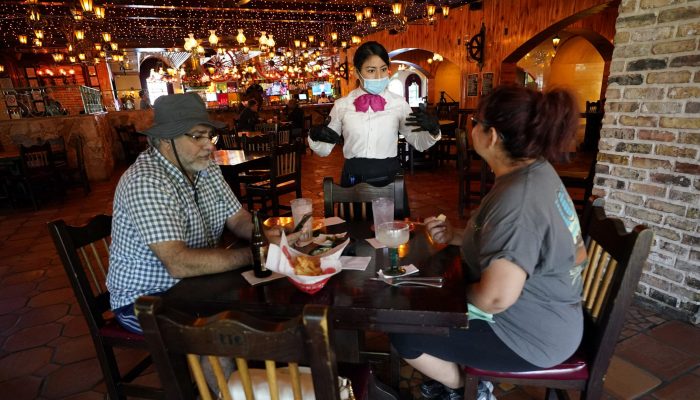 Waitress Fatima Hernandez, center, talks with Lulu Salcido, right, and Hamid Farzam at El Tiempo Cantina Friday, May 1, 2020, in Houston. The restaurant reopened their dining room for table service, with limited capacity, Friday. Texas’ stay-at-home orders due to the COVID-19 pandemic have expired and Texas Gov. Greg Abbott has eased restrictions on many businesses that have now opened.

At least 15 people confirmed positive for COVID-19 were announced to have died over the weekend, and more than 130 people in total have died from the disease in the county, as Gov. Greg Abbott’s plan to lift restrictions on Texas businesses amid the pandemic moved forward.

Abbott started lifting restrictions on businesses Friday, allowing all retail, restaurants, movie theaters and malls to reopen at 25% capacity. Museums and libraries can also reopen, but hands-on exhibits must remain closed, according to the order. Religious institutions were also permitted to expand capacity, and outdoor sports involving no more than four participants at any given time, which involve social distancing, could take place. Fewer restrictions were placed on all licensed health care professionals, but hospitals must still reserve 15% of capacity for COVID-19 patients.

The governor referred to the order as “phase one” in the process of “reopening” Texas, with a second phase coming as soon as May 18, allowing more businesses to open and more restrictions lifted. Such a reopening would come pending more than two weeks of medical data on hospitalization and death rates, though the governor did not announce a specific threshold for whether the plan would move forward.

Abbott’s executive order superseded all local orders, including orders from Hidalgo closing nonessential retail and limiting restaurant service, and mandating the wearing of masks in public. But Hidalgo on Friday asked the public to keep abiding by the county’s recommendations, even if they are no longer legally enforceable, saying that not doing so could lead to a resurgence in the virus that could overwhelm the health care system.

“If these doctors and these nurses get overwhelmed, people die en masse,” Hidalgo said Friday. “Plain and simple.”

Not all public officials took the same position as Hidalgo. Some local leaders, arguing that Abbott’s orders were too vague, attempted to reopen all businesses Friday, prompting Attorney General Ken Paxton to step in and clarify that hair salons, gyms and other businesses were still not allowed to reopen.

Meanwhile, some restaurants have opted not to reopen at all.