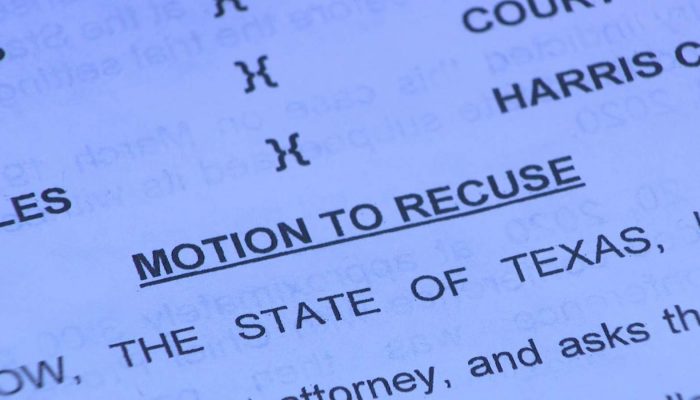 HOUSTON – Harris County prosecutors are asking a misdemeanor court judge to recuse himself from presiding over a theft case.

A motion to recuse was filed after the judge held a hearing in the case and expressed his displeasure with how prosecutors were handling the matter.

The hearing took place on March 20 and involved allegations of a stolen laptop from a business. Judge Franklin Bynum was direct in his comments to prosecutors.

“You’re failing your statutory obligation as prosecutors and I’m not going to tolerate it,” Judge Bynum states during one portion of the hearing.

Court records read Bynum did not feel there was adequate probable cause to support a criminal charge and asked prosecutors to dismiss the charges, but they refused. Bynum then sought to have a quick trial and resolve the matter. Prosecutors, however, took the case to a grand jury and secured an indictment. Bynum expressed his concerns in light of the COVID-19 pandemic.

“The problem in this case from the beginning is people are detained in the Harris County Jail and their detention alone is a public health emergency and that fact seems to be completely lost on you and your office,” Bynum said during the hearing.

After the hearing, prosecutors filed a motion to recuse; asking the judge to step down from this case and arguing his motivations aren’t solely health related.

“Judge Bynum has publicly proclaimed his belief that most law violators should not be arrested, imprisoned or prosecuted for committing criminal offenses,” prosecutors wrote in their motion.

Prosecutors further wrote Bynum took an oath to uphold the law and “those laws do not permit a sitting judge to force the dismissal of cases or to otherwise manipulate court proceedings to ensure the acquittal or immediate release of a defendant.”

“It was well within the Harris County District Attorney’s Offices rights to indict this case,” said Channel 2 Legal Analyst Brian Wice. “When the business of judging becomes personal, then its time to walk away.”

Wice said Judge Bynum’s comments during this hearing could cast doubt on his impartiality.

The suspect in the theft case was also wanted on a domestic violence charge out of Michigan. Judge Bynum has not responded to our requests for comment. Sources told us the matter has now been sent to the presiding judge over our judicial region.

You can read the prosecutor’s full motion here.

You can watch the court hearing on this matter here.

This is also not the first time prosecutors have locked horns with this judge.