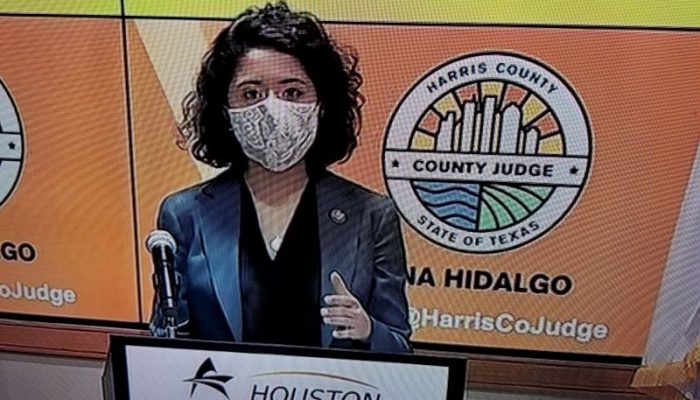 Last Friday, the Houston Health Department announced it was expanding its COVID-19 outreach efforts to the city’s nursing homes. Today, in her morning press conference, Harris County Judge Lina Hidalgo announced the formation of a county Strike Force to look into the situation countywide.

“We all have heard the stories in senior centers, in nursing homes. There was a report last week that as many as one in four deaths from COVID-19 are somehow linked to senior living facilities,” Hidalgo said. “That is unacceptable.

“In some ways these facilities are the path of least resistance for the virus. Wherever folks live in close contact in groups in domestic violence shelters in homeless shelters the senior living facilities, folks are sitting ducks right now and we can’t allow that. We’re not going to allow that anymore.

“So today we’re announcing a new COVID-19 testing strike team,” she said. “The team will be comprised of county epidemiologists, public health experts, and testing staff that will be deploying tests to facilities at high risk of coronavirus spread, at high risk of outbreak to try and contain the virus in those facilities where there is more of a possibility that it will spread.”

The team will begin on Tuesday, April 28, by conducting coronavirus tests on residents and staff at nursing homes, she said. She said the county will add more strike teams “as resources allow.”

Hidalgo also announced that the county is opening two additional pop-up locations where people can go to be tested for the coronavirus. The first two mobile locations will be in Tomball and Southeast Houston on Monday and Wedfnesday and then move to southwest Houston and Crosby on Thursday through Saturday, she said. The third and fourth mobile sites will be announced at a later time. “We’re a big county and we need to make it easier for folks to be tested.”

Today was the first day of the 30-day order by Hidalgo requiring everyone in the county to wear masks when they are out and about.A number of critics have assailed this action, the latest this morning in a statement from the Texas Municipal Police Association, in conjunction with the Houston Police Officers Union and the Harris County Deputies Organization saying officers should not be tied up citing and jailing people for not wearing masks.

Saying they endorse the concept of masks and are more than willing to help distribute them, the group added:

“However, threatening to have people cited and even jailed for not wearing protective clothing—especially in a county that refuses to prosecute a large percentage of actual criminals—is tremendously bad public policy. Such a mandate will only serve to erode the relationship between our law enforcement officers and the citizens they serve in a time when law and order and public safety has never been more important.”

Without referring to the law enforcement union’s statement, Hidalgo addressed the issue saying it has always been one of education first and that in fact the stay-at-home orders barring bars and restaurants from opening for dine-in (or drink-in as the case may be) not only carried fines but jail time. However, she said, “Police as far as I know, haven’t issued a single citation.

“That doesn’t mean fines are not a possibility. This is not a police state; we prioritize education. But we need to make the order enforceable, for the same reasons seat belt laws are final and enforceable aor parking in handicapped spaces is Final and enforceable, it’s to show it’s not a recommendation but a requirement. This is about protecting life. We have to send the signal that it is not optional.”

About the Author: Margaret Downing