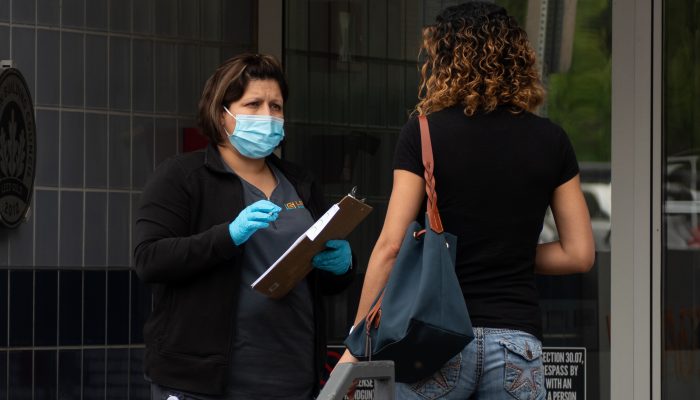 The state of Texas will begin lifting restrictions placed on businesses to help stop the spread of the coronvirus this week, Gov. Greg Abbott said Monday.

In what Abbott called “phase one” of the “reopening” of Texas’ economy, all retail, restaurants, movie theaters and malls can reopen at 25% capacity starting Friday. Museums and libraries can also reopen, but hands-on exhibits must remain closed, Abbott said.

“Every life lost is a tragedy, but the fact is the tragedies in Texas have been far fewer than most states in the United States,” Abbott said. “The lives saved are priceless, but the price has been steep. Many have lost jobs, others have lost businesses.”

As part of the order, religious institutions can also expand capacity on Friday, and outdoor sports will be allowed to continue, so long as they involve no more than four participants at any given time, and involve social distancing, like golf and tennis. All licensed health care professionals are allowed to return to work with fewer restrictions, but hospitals must still reserve 15% of capacity for COVID-19 patients.

There are different standards for smaller counties. Those with five or fewer confirmed cases of COVID-19 will have all restrictions lifted on May 1, Abbott said.

A second phase, which opens more businesses and allows for more sporting activities, could come as early as May 18, pending more than two weeks of medical data to confirm no “flare-ups”, the governor said.

Harris County Judge Lina Hidalgo has announced plans to increase testing in the county. A recently formed “strike team” consisting of epidemiologists, public health experts, social workers and testing staff will start traveling to nursing homes around the city to test residents and staff, starting with one nursing home a day and prioritizing those with cases. The teams will conduct site assessments, provide recommendations and test large groups of residents and staff.

Public health experts say a quarter of all deaths in Texas are somehow linked to nursing facilities.

The county also announced two new testing sites, in the Tomball area and in southeast Houston. The sites will begin operation later this week.

The city of Houston has also opened up another COVID-19 testing center, and Mayor Sylvester Turner said the city is working to open additional sites. The mayor is urging essential workers and front-line healthcare workers to get tested. The newest site is at the Barnett Sport Complex in Southeast Houston.

Turner said it’s important to know who is infected as the Governor plans to start reopening the state.

The city said it’s focusing on communities of colors, as data shows that black and Hispanic communities have been hit hardest by the virus.

All city-run sites are open to anyone, regardless of symptoms or immigration status.

Harris County officials are facing the likelihood that COVID-19 will still be a threat when the primary runoff election takes place in July. Now those officials are working on ways to keep those voters safe.

County Clerk Diane Trautman will ask Harris County Commissioners Court for a potential expansion of the vote-by-mail program due to COVID-19. Trautman previously told Houston Public Media that the county was not in a position to adopt a universal all-mail ballot program. She noted that states that have such a program took years to plan for it and have fewer registered voters than Harris County.

Meanwhile, a lawsuit continues to work its way through the courts calling on the state to allow anyone who wishes to vote by mail during the pandemic to do so. Harris County has filed a court brief in support of that suit.

As millions of people in the Houston region transitioned to staying home, levels of nitrogen oxides dropped significantly near typically high traffic areas, like along the 610 North Loop. But in other areas like Deer Park, levels stayed roughly the same, according to Gunnar Schade, an atmospheric scientist at Texas A&M University.

“The results are not straightforward,” Schade said. “You get quite a bit of heterogeneity and you can’t just blanketly say ‘great, it’s getting better everywhere.”

Schade compared pollution data from three weeks before the stay at home order and up to four weeks after. Cars are one of the major sources of nitrogen oxide emissions, and nitrogen oxide reacts with other chemicals in the air to form ozone smog.

Gov. Greg Abbott on Monday was set to announce plans to lift restrictions on Texas businesses and “reopen” the Texas economy, even as public health experts stress there is more to be done before moving forward with such a plan.

Earlier this month, Abbott announced his plans to gradually reopen aspects of the state’s economy, putting together what he called a “strike force” to advise on the steps needed to do so. The governor issued an executive order allowing allowing “retail-to-go” services, similar to restaurant service during the statewide stay-at-home order, opened state parks, and loosened some restrictions on surgeries.

The governor at that time set April 27 as the next phase in that reopening, announcing the further loosening of restrictions at that time.

The order, he said, would supersede any existing local orders from county or city officials. Mayor Sylvester Turner on Friday seemed to confirm that, saying any order from Abbott would “trump — let me put it that way — local government orders.”

Harris County Judge Lina Hidalgo was awaiting Abbott’s announcement before deciding whether to move forward on extending her own stay-at-home order, a spokesperson from her office said Monday.

Experts have urged caution on lifting restrictions until there is significantly more testing and contact tracing — a method of identifying who a patient that’s tested positive for COVID-19 has come into close contact with in recent weeks, in order to better understand the spread of the virus and warn others about their possible exposure.

Some public health officials, meanwhile, are worried that lifting those restrictions will roll back much of the work already done by local communities.

“The lag in this virus is two weeks,” Harris County Public Health Executive Director Umair Shah told Houston Matters on Monday. “My concern is that as we open up and people start to mix back together, are we looking at an increase in surge a couple of weeks from now, that we’ve not seen thus far? And that is the unknown that continues to keep me concerned.”

Harris County issued its stay-at-home order on March 24, a full week before Abbott’s statewide order. And local orders like Harris County’s recent requirement to wear masks in public, effective Monday, were put in place out of an abundance of caution, Shah and other have said.

No matter what restrictions are lifted, Shah said, Harris County residents should continue to take those protective measures — facial coverings, social distancing — to avoid a potential surge in cases.