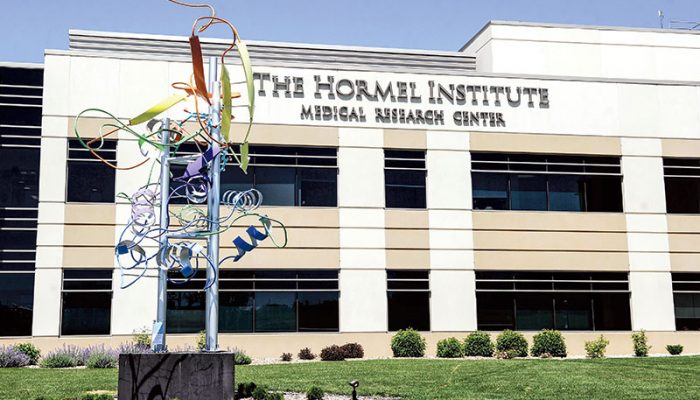 
The Hormel Institute has been forced to follow the same trends as everybody else during this time of COVID-19.

Access to the building has been reduced to essential staff only and even then people are asked to limit their exposure.

The pandemic has effectively hindered operation at the Institute, but science doesn’t stop and scientists and staff are continuing to find ways to keep working and make progress in their areas as well as reaching out to the public for ways to help.

It’s not an easy transition as some experiments have slowed and others have been postponed indefinitely.

With the science slowed, some Institute scientists have taken to Zoom and recording videos that they contribute to students throughout Austin.

With three young students of her own at home, Cheftez saw the opportunity to participate in the videos as a way to contribute to education in Austin during this time.

“Mostly it’s about our research,” she said, explaining what she focused on in her videos. “I talked about the different ways cells can die or about stem cells, what are their properties. But it depends on the specific labs. Mostly it’s describing our experiences.”

The Institute began reaching out to principals as the idea was formulated and heard positive responses back.

Dr. Luke H. Hoeppner, Ph.D., assistant professor and head of the Cancer Biology research section at the Institute, was another scientist that took part in the video series.

He found that it was a perfect time to really introduce the students to the world of science right here in Austin.

“I think as scientists, one of the skills that we can teach youth as well as the general public is challenging ideas,” Hoeppner said. “If you hear something; what is the basis for that rationale and how has it been tested?”

The video that Hoeppner took part in was teaching students the idea of a hypothesis.

“I was able to record a video teaching elementary students about what a hypothesis is,” Hoeppner explained. “I recorded a five minute video using my children as volunteers. We did an experiment and made a hypothesis about the density of water and salt water and then guessed whether an egg would float and spoiler alert: the egg floated in the salt water.”

The effects of how far into the future COVID-19 will continue being an issue is unknown, but as long as it goes on, the Institute sees a continued place for the videos.

“I think until it’s necessary,” Chefetz said. “It depends on further interest. If they request more, we’ll make more.”

Despite working from home constraints, the scientists of the institute are finding ways to continue their own research.

There’s plenty of work to do, but continuing the experiments has become a problem.

“It’s been a challenge,” Hoeppner said. “From a work perspective and personal life perspective.”

However, many of the scientists are able to fall back on previously generated data to continue pushing forward and they’ve been able to continue writing papers and talking with associates through Zoom.

“As a (Principal Investigator) my work is a lot of writing: writing grants, writing papers for reviews, and doing seminars,” Cheftez said. “In research, doing experiments is really extremely limited right now.”

Hoeppner was also fortunate in his ability to work with data from home on top of the grant work that occupies so much of his time, which includes submissions to organizations like the Department of Defense, National Institutes of Health and the National Cancer Institute.

In particular though, it’s been the data he and his department have been able to work on, that’s been fortuitous.

“Another example of being fortunate to use what we have: We were in the process of having a manuscript peer reviewed,” Hoeppner said. “We were fortunate, right before the COVID-19 suspension, a post doctorate, (Sk. Kayum) Alam, did a great job to get the data done, get the paper submitted, and we just found out that most likely it would get accepted. I’m proud of Dr. Alam. He accelerated that work. We didn’t know this was coming, but he did a good job prioritizing.”

Collaboration with Rendong Yang, Ph.D., in Computational Cancer Genomics also allowed Hoeppner to get ahead of the curve. That work allowed his department to get data from a wet lab at the Institute so as to be able work on it when he was forced to work at home.

Even taking into account the work scientists are doing, there is no denying just how much of a disruption COVID-19 has been.

“We’re busy as ever, but the biggest challenge is not being able to test ideas,” Hoeppner said. “The most important part of being a scientist is having hypotheses and theories and testing them. We can’t test them. The hard part is for grants and papers. We want to propose something new, but we won’t have the opportunity to support it.”

It’s not that scientists alone have been impacted by COVID-19.

The building itself and those moving parts within still need maintenance and having limited access to the building is making that more challenging as well.

“A huge part of it is I had to split up my staff in case somebody got sick so that we still had backups to come in,” said Building Systems Manager Mark Severtson. “We’re coming in on opposite days so there’s no contact.”

This has made it hard to keep everything up and running and forcing his team to prioritize as much as possible. It’s also meant closing off areas that aren’t being used as much to make it easy to sanitize and clean the building.

“The main focus is trying to keep all things sanitized, but with a limited staff,” Severtson said. “We do continue to monitor and service our own equipment, just scaled down and prioritized.”

However, as luck would have it, Severtson’s team might have been more ready than some due to another of his staff having come up with a new plan for emergencies.

“Prior to this, we had a member of our team come up with an emergency plan,” Severtson said. “It’s something we had just coming online so it was kind of interesting. We had to modify it a bit.

“We had everything: fires, severe weather, shooters, chemical spills, stuff like that,” Severtson said. “We were hitting on everything that we could think of, building off a plan of the University of Minnesota.”