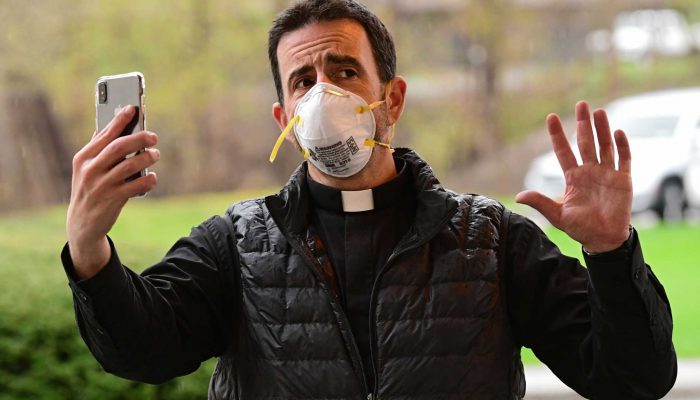 
ALBANY – A hospital chaplain’s connection with a patient is intimate and normally played out six inches apart – not the six feet apart called for during the coronavirus pandemic.

But six feet even feels intimate now when compared to the barriers chaplains face to not only avoid being infected with COVID-19 themselves, but to protect others around them in case they are unknowingly a carrier of coronavirus.

In order to minister, they’re forced to stand outside hospital rooms to bless a patient, or appear outside buildings while their flock watches out the windows. Or, the only connection is virtual through a tablet or an old-fashioned telephone call from miles away.

“We are doing it more remotely. Chaplaincy has to do with personal connection. We are doing it in a more remote way especially with the COVID-19 patients,” said Aloysius Kabunga, a Roman Catholic lay chaplain and manager of Spiritual Care for St. Peter’s Health Partners.

Fear is a constant companion for the chaplains and the patients they’re ministering to inside St. Peter’s Hospital, Albany Medical Center Hospital and other hospitals.  Patients are encountering anxiety and loneliness as they are cut off from family members.

“This is something I was not trained for. Some patients, those who are non-COVID, are scared of us when we come in because they have to be protected. We’re also being very protective of ourselves. We don’t know who has what,” Kabunga said standing outside the entrance to St. Peter’s Hospital.

“Prior to this pandemic so much of this was personal connection. The chaplain would come in and the patient wasn’t scared you were going to spread something to them,” Kabunga said.

The pandemic has shut down churches, pushing weekly services on to social media platforms and streaming services.  It’s also felt in hospitals, nursing homes, hospice care and private residences, wherever people need spiritual reassurance and guidance not only for themselves as patients but for their families. Funeral services have also been limited to only immediate family members allowed to be physically present.

St. Peter’s and Albany Med’s safety protocols for dealing with the coronavirus led Rev. John Scott, who is the Albany Episcopal Diocese’s hospital chaplain in Albany, to change his routines at the two hospitals. Scott switched from visiting Episcopalian patients in their rooms, to dialing in on the phone to speak to them.

But a chaplain’s physical presence sends an immediate message that is not the same as just hearing a voice, Scott said.

“The people take comfort from your physical presence as well as the spiritual presence.  The people I talk to have understood and they’ve been appreciative of the care that they’ve received. We’re carrying on as best we can under the circumstances,” Scott said.

Scott has worked in hospital chaplaincy since he was first ordained and was in Texas during the AIDS epidemic.  Today’s coronavirus pandemic brings back memories of his experiences nearly 40 years ago.

“At that time, people really didn’t know much about it. I can remember suiting up and putting on mask and gloves,” Scott recalled about his ministry then.

Verbal communication sometimes has to be basic and loud.  Bullhorn and holy water in hand, Rev. Scott VanDerveer recently stood outside The Pines at Catskill Center for Nursing and Rehabilitation to bless the residents inside.

“They can’t even open the windows because they’re trying to prevent any contamination. I went to the four sides of the building and did that service four times,” said VanDerveer, pastor of St. Patrick’s Roman Catholic Church in Ravena and St. Mary’s in Coxsackie.

Those inside watched from the windows as VanDerveer made his way around the building blessing each side.  He’s also made a video of a blessing and sent it inside.

“I’m just trying to find creative ways to let them know that we’re praying for them,” VanDerveer said.

While the battle against COVID-19 in the nursing homes is about stopping the virus’ spread among the residents, “our battle looks a lot different. We’re fighting to protect our elders from the outside world,” said Rabbi Beverly W. Magidson, director of chaplaincy services for the Jewish Federation of Northeastern New York. She also ministers at the Daughters of Sarah Senior Community and the Nursing Center on Washington Avenue Extension.

The chaplains are also shepherding families who cannot be with those who are hospitalized or in nursing homes.  Magidson uses technology to help family members stay in touch.

“We will hold iPads and phones so that loved ones can see their elder and reassure them that everything is ok,” Magidson said.

“We are fighting frustration of family members not being able to visit and families who feel disconnected and fear for their loves ones. So until this crisis is over we will give comforting words and do our best to create fun activities that can be done safely,” Magidson explained.

Some physical connection is being reestablished at Albany Med where the chaplains are being allowed to be in the room with some COVID-19 patients, said Amelia Catone, who is a Buddhist and an interfaith chaplain in Albany Med’s Department of Pastoral Care.

The chaplains hadn’t been allowed into a patient’s room in order to preserve personal protective equipment and had turned to technology to communicate.

“The ones of us who are going into the room feel very confident in the effectiveness of the PPE. We have a healthy respect for the disease and the infection. We also feel blessed to be able to offer care in that way that is intimate,” Catone said.

The “Ministry of Presence” is the term used to discuss how a chaplain’s being there in person communicates at a deeper level than through technology. It frustrates chaplains to be kept away.

“The most important thing is person-to-person because you make a different sort of connection that feels more valid and has spirituality,” Catone said. “It’s a lot more reassuring to the patient.”

Before the extent of the coronavirus was known, Tahlia Hadley, a chaplain at St. Peter’s who is Catholic, was exposed to a patient who tested positive during her rounds at the hospital. She felt the fear that came with learning about her exposure.

“It’s really scary to get that phone call and be told you were exposed to a positive patient,” said Hadley, whose test came back negative. She worried about her family.

“I wouldn’t change anything about that visit. That was a very powerful conversation with that man. I helped him in prayer. I felt it was important that I was there as a chaplain at that time,” Hadley said.

At the end of life, patients in hospice care also are impacted by coronavirus concerns, said Rev. Jeffrey Palmer, a Presbyterian minister who was a hospital chaplain for 27 years and now works for Community Hospice in Rensselaer.  The hospice workers are taking precautions and can’t be as close as they would like.

“There is a heightened sense of anxiety and fear,” Palmer said. “I’m needed to be a source of comfort, of compassion and peace for the people we are seeing.”

About the Author: Times Union