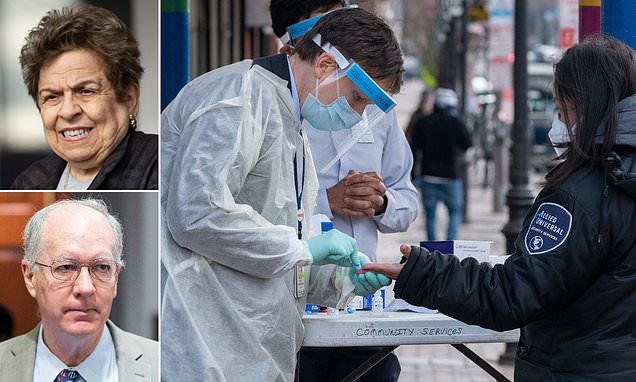 Pressure is mounting on federal agencies to approve the process, as experts say thousands of lives could be saved by speeding up the race to get a vaccine to market.

The idea has now been backed by a group of 35 House lawmakers, who wrote to the Food and Drug Administration this week encouraging the agency to approve the trials.

However, the process continues to divide the medical community as skeptics have raised the moral dilemmas around endangering the lives of volunteers.

In the past, scientists have erred on the side of caution when testing new vaccines ever since Edward Jenner pioneered the science of immunology over 200 years ago when he developed the smallpox vaccine.

Jonas Salk, creator of the polio vaccine in the 1950s, even refused to give the vaccine to the public until he had tested it on himself and his own family first.

But the group of House lawmakers, led by Reps. Bill Foster and former secretary of Health and Human Services Donna Shalala, have said the coronavirus pandemic is a ‘war’ and volunteers to vaccine trials are people who take up ‘dangerous missions’ to ‘save the lives of others’.

‘Our situation in this pandemic is analogous to war, in which there is a long tradition of volunteers risking their health and lives on dangerous missions for which they understand the risks and are willing to do so in order to help save the lives of others,’ they wrote in their letter to the FDA.

Foster said Tuesday the group was sending a message that there is ‘understanding from Congress’ that risks need to be taken to develop a vaccine faster.

‘We should move the risk benefit optimization a little in favor of more rapid and riskier vaccine approval,’ he said, adding that by developing a vaccine ‘even a month earlier… there will be tens of thousands of people whose lives have been saved.’

The FDA responded saying it is ‘exploring all possible options’ to speed up a vaccine.

‘The FDA is exploring all possible options to most efficiently advance the development of safe and effective vaccines that will prevent COVID-19,’ FDA spokesman Michael Felberbaum told The Hill Thursday.

WHAT IS A CHALLENGE TRIAL?

A challenge trial involves giving one group of young, healthy volunteers a placebo and another group the experimental vaccine.

In a typical clinical trial, researchers would wait for the volunteers to become infected by the virus in their daily lives to see if the vaccine worked.

In a challenge trial, both groups would then be deliberately infected with coronavirus – the ‘challenge’ aspect of the trial.

This would enable scientists to tests much more quickly the effectiveness of the vaccine to protect the population from the virus so that it can be quickly scaled up to the masses.

WHAT ARE THE BENEFITS?

Time – Scientists have warned that a coronavirus vaccine won’t hit the market for 18 months. This could be reduced to a matter of months if challenge trials are a success, experts claim, saving thousands of lives.

Smaller sample – In clinical trials, larger samples of volunteers are needed because not all people will encounter the virus in daily life. In a challenge trial all volunteers are intentionally infected with the virus meaning fewer people are needed as the virus is deliberately administered to the required number.

WHAT ARE THE RISKS?

Death – There is no known cure for coronavirus and limited knowledge over the virus. To deliberately infect volunteers with the virus – particularly those in the placebo group – could have a big risk to life.

Though he did not rule out the trials, Felberbaum did sound a note of caution over such an approach.

‘Human challenge studies used to develop a COVID-19 vaccine may present ethical and feasibility issues that can be avoided with the use of animal models,’ he said.

A challenge trial involves giving one group of young, healthy volunteers a placebo and another group the experimental vaccine.

Both groups would then be deliberately infected with coronavirus – the ‘challenge’ aspect of the trial.

This would enable scientists to test much more quickly the effectiveness of the vaccine to protect the population from the virus so that it can be quickly scaled up to the masses.

In a typical clinical trial, researchers would wait for the volunteers to become infected by the virus in their daily lives – but fears are growing that the country does not have the luxury of time on its side.

More than 52,000 Americans have now been killed and 927,000 have been infected by coronavirus in the few short months that it has ravaged the nation.

Stanley Plotkin, a renowned vaccinologist who helped invent the rubella vaccine, and Arthur Caplan, a bioethicist at New York University, recently endorsed the idea in an article in the journal Vaccine warning that without speeding up the development and rollout of a coronavirus vaccine ‘millions’ will die.

The normal vaccine trial process ‘normally takes months to years, during which [coronavirus] will infect and possibly kill millions. Acceleration of that standard process is necessary,’ they wrote.

To wait for the volunteers to be infected with the virus in society – where social distancing guidelines have limited the spread of the infection – could take many months, and experts have warned that a vaccine developed this way will not hit the market for around 18 months.

Challenge trials involve deliberately infecting people with the deadly virus to test a vaccine’s effectiveness. The process has divided the medical community with supporters saying it will speed up a vaccine getting to market and save lives while skeptics warn that it is unethical and volunteers will die in the process

Supporters say this means using challenge trials could save many months – and many lives.

But there are ethical challenges at stake when deliberately infecting people with a deadly virus.

When challenge trials have been used in the past, it has been for vaccines for diseases that can be cured and are less lethal, like malaria.

When properly treated, malaria has a low death rate for young and healthy people.

To test a vaccine for coronavirus – that has no known cure and a higher death rate – is a bigger risk to life.

Younger, healthier people have a lower risk of fatality from COVID-19 than older people, but data and knowledge of the virus is still in short supply, experts warn.

People in the placebo group especially could die when they are administered the deadly virus.

Jeffrey Kahn, director of the Johns Hopkins Berman Institute of Bioethics, warned that ‘consent can only do so much work’ in justifying the dangers to individuals.

However, despite the risks, volunteers for trials are flooding in.

A website set up to recruit volunteers, called 1 Day Sooner, has more than 2,000 people signed up to take part in a potential trial, The Hill reported.

In New York, a non-profit that typically takes volunteers for kidney donations has switched tact to accept volunteers for coronavirus vaccine challenge trials.

The COVID Challenge is ‘a hub for people to volunteer and to advocate for safe and rapid vaccine development.’

It has also taken the names of around 1,550 volunteers for if – or when – trials are given the green light.

‘It is not a riskless thing,’ founder Josh Morrison told The Atlantic.

‘But neither is kidney donation. And each year, thousands in the US and tens of thousands in the world do that… If you think this will move a vaccine forward by even a day and save thousands of lives, the ratio of volunteer lives lost to lives saved would be thousands to one. Any life lost is tragic, but that’s worth doing as a society if you have volunteers who know the risk.’

One volunteer told the Atlantic she was inspired by Salk’s work on the polio vaccine – where he tested it on himself before giving it to riskier participants.

‘I am lucky in a lot of other ways, including good health. I’m young. I don’t get sick a lot. This seems like a way that I can share some of that luck. I empathize with other people. The pain of losing someone you care about is the same no matter who you are. Anything to reduce that amount of pain is something I should try to do,’ said Gavriel Kleinwaks, 23, a mechanical engineering student at the University of Colorado.

She also said there is a high chance she will get the virus with or without the trial anyway.

‘There’s the risk of participating in a human trial, but there’s also the risk just walking around. It’s not that I’m not afraid of the virus. I am. But the trial didn’t seem like an enormous added risk,’ she said.

Another volunteer Lehua Gray, 31, said she is keen to take part in trials if it speeds up the vaccine being available to people – like her own father and grandmother – who are more vulnerable to the virus.

‘If I could roll the dice for myself, and keep them from having to roll the dice—I have a much better dice to roll,’ she said. ‘I’m generally pretty risk averse. As a kid, I would jump on the trampoline but I try to only jump by myself because you’re much more likely to be injured when you jump with someone else. This seems like a risk that enables me to help people in a way that I normally wouldn’t be able to do. And there’s always a chance I’ll get [COVID-19] anyway, without helping anyone.’

However, no vaccine is yet at the stage of development where any type of trials could take place.

About the Author: Rachel Sharp