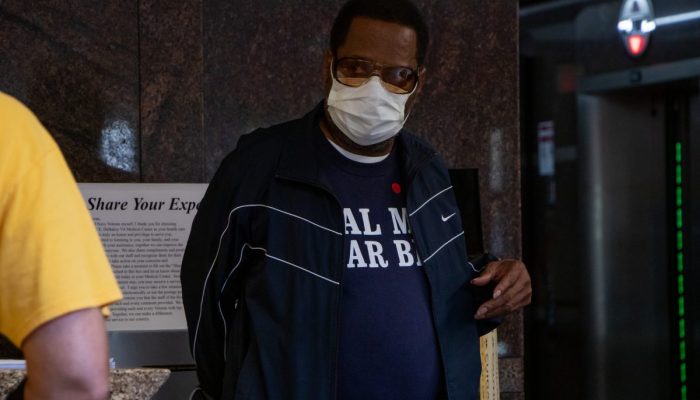 Coronavirus screening taking place at the Veterans Affairs Medical Center on March 10, 2020. Black and Hispanic Houstonians make up more than 70% of the deaths related to COVID-19, Mayor Sylvester Turner said.

The city of Houston will open a new mobile coronavirus testing site in Sunnyside, a historically black neighborhood, as data continues to show that communities of color are the hardest hit by COVID-19.

The site, at Evan E. Worthing High School, was set to open Wednesday and would operate through May 3 from 9 a.m. to 5 p.m, or until it reaches a capacity of 150 people, Mayor Sylvester Turner said Wednesday.

The mayor noted that the neighborhood was one of the hardest hit by COVID-19 in Houston, citing a Houston Chronicle analysis of cases across the city.

Local residents can register for an appointment at txcovidtest.org, or by calling 512-883-2400.

The mayor reported 96 new cases of COVID-19 in Houston, bringing the total to 3,515 inside city limits as of Wednesday, with two new deaths, which brings the total to 52.

Black and Hispanic Houstonians make up 75% of the 52 people who have died of COVID-19 in the city, the mayor said. Black Americans are three times more likely to contract the disease, and six times more likely to die from it, according to an analysis from the Washington Post.

Turner said the state was providing the mobile unit, though most of the city’s public testing has come with the help of federal resources. But the city’s FEMA-assisted testing sites were difficult to reach for many people in those communities hardest hit, who may not have reliable access to transportation, the mayor said.

The goal was to rotate mobile units throughout Northside and other areas, making them accessible to as many people as possible, Turner said.

Rep. Al Green, who represents Sunnyside as part of his congressional district, said that testing wouldn’t just help that neighborhood.

With further testing, health officials will be able to perform contact tracing that would hopefully help to stop the spread of COVID-19, he said.

“We cannot conclude that we should only concern ourselves with where we reside,” Green said. “We’re all in this together.”

About the Author: Matt Harab