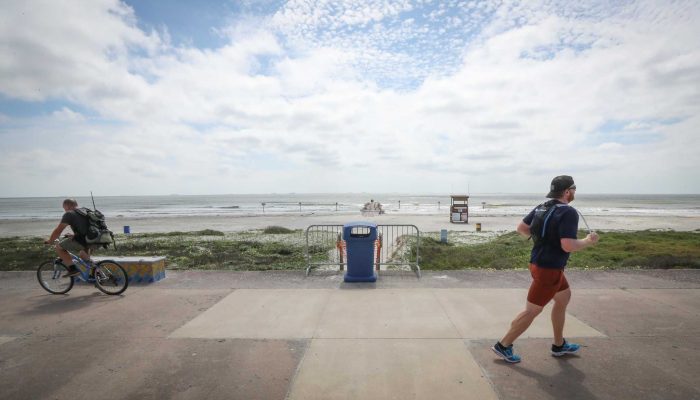 The Houston Chronicle has lifted the paywall on this developing coverage to provide critical information to our community. To support our journalists’ work, consider a digital subscription.

9:43 p.m. Governor Greg Abbott will deliver a COVID-19 update during a Monday afternoon press conference, in which he is expected to announce plans for reopening parts of the economy, reports the Chronicle’s Jeremy Wallace.

The conference will be held at 2:30 p.m. from the state capitol.

7:11 p.m. For at least one Houston-area church, the switch to online streaming has expanded its reach, reports the Chronicle’s Jamie Swinnerton.

Since at least 2015, Saint Anthony of Padua Catholic Church in The Woodlands has had the capability to live-stream services. Originally meant to help connect with members unable to make it to service, now the technology has allowed the church to gain a new following of viewers from around the world. Read more.

4:30 p.m. Open Bolivar Peninsula beaches have been crowded since last Wednesday, but so far visitors “have been behaving,” according to Galveston County Sheriff Henry Trochesset.

Galveston County beaches closed for about two weeks but reopened April 13. Families have comprised about 95 percent of the crowds, Trochesset told the Houston Chronicle on Sunday. Videos shared on social media show cars backed up along the beach entrance, but Trochesset said he did not know of any penalties issued for people ignoring social distancing rules.

Those who have been too close together have cooperated with authorities, he said.

“They’ve all done what we asked,” he said.

The city of Galveston plans to reopen beaches Monday.

1:37 p.m.: Here’s a reminder that starting tomorrow, Harris County is requiring all residents 10 and older to wear face masks in public.

Reporter Alex Stuckey has a list of where to get masks in the county and what you need to know.

1:00 p.m.: Where are Harris County’s coronavirus cases concentrated? Some of the county’s most impoverished and predominantly black neighborhoods are at highest risk, the Chronicle’s investigative team writes.

A Houston Chronicle analysis of all positive COVID-19 tests reported in Harris County through April 20 shows that seven of the 10 zip codes with the highest rates were majority black and low-income.

Zip codes that include some of the city’s primarily African American neighborhoods — from Sunnyside south of the 610 loop to Settegast to the northeast — had double and triple the average per capita rate for Harris County, which reported about 1 case per 1,000 residents.

There are now 2.9 million confirmed cases worldwide of COVID-19, according to Johns Hopkins University. The U.S. now leads the world with 939,249 confirmed cases as of Sunday morning.

Texas has 24,350 confirmed coronavirus cases to date, according to state and local data. In the Greater Houston region, 8,144 people have been diagnosed with COVID-19, the sickness caused by the new virus.

Galveston beaches are slated to reopen Monday, but only under certain restrictions. The City of Galveston ordered all public beaches to close on March 29 after COVID-19 social distancing practices were not adhered to by beach visitors.

The Galveston City Council voted Thursday to reopen beaches for only three hours each morning from 6 a.m. to 9 a.m. for pedestrian exercise only.

Before you head to the beach, here’s what you need to know:

Beach towels, cars, chairs, tents, picnics and umbrellas are not allowed. Beaches will remain closed during all other hours. Violators could face a $500 fine.