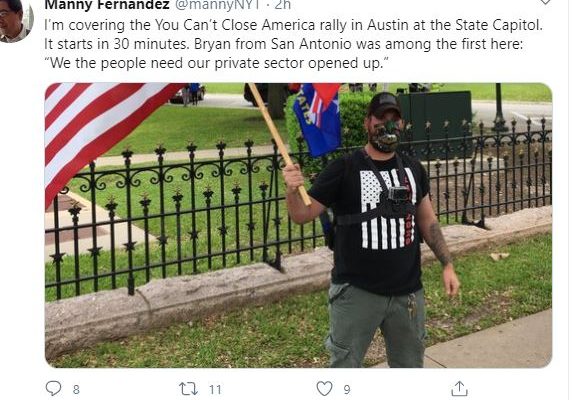 Houston coronavirus updates: What you need to know about April 18

Chron.com is compiling the latest headlines on the COVID-19 pandemic and its effects on the Houston area.

All COVID-19 testing sites across the Houston-area have been closed due to severe weather, Harris County Health announced that the sites were slated to reopen on Sunday afternoon.  People who have a scheduled Saturday appointments can keep those appointments on Sunday.

During a COVID-19 update on Saturday afternoon, Mayor Sylvester Turner announced that there now 121 new positive COVID-19 cases, bringing the city’s total up to 2,691.

Protesters rallied in Austin, calling for state governments to reopen local economies all across the country.  Demonstrators launched their protest at the Texas Capitol in Austin around noon, Austin Bureau’s Eric Dexheimer reports.  Rally participants carried signs with messages such as, “Enough,” and “Open Now.”

Alex Jones, the far-right conspiracy theorist and talk show host behind InfoWars, was a participant in the Austin rally, according to the Times.  Some of the protesters shouted, “Fire Fauci,” referring to Dr. Anthony Fauci, the director of the National Institute of Allergy and Infectious Diseases.

On Twitter, President Donald Trump seemingly sided with protesters in Minnesota, Michigan and Virginia who are now defying social distancing orders to rally against the states’ safety measures intended to stop the coronavirus spread.

Astros’ third basemen Alex Bregman spoke with Houston Chronicle’s Chandler Rome about the pivotal question: “When, or even if, baseball could be played in 2020. Bregman said he was confident that the Astros will, in some fashion, have a 2020 season.

“I think we’re built for any kind of season,” Bregman said. “But who knows how long that’s going to be or what’s going to go on.”

Bregman said that one thing that has inspired him during this time are Houstonians who give their all and pitch in when others need help. Bregman and his fiancé, Reagan Howard recently surpassed $1 million in their fundraising efforts for the Houston Food Bank.

“I’ve actually been inspired by the people here in Houston,” Bregman said. “I saw a lot of people during (Hurricane) Harvey, whether it was Derrick Lewis driving his truck around the city helping people out. I love how Houston is hands on and helping each other, so we want to do the same.

On Saturday, Bregman and Howard handed out food in partnership with The Society of St. Vincent de Paul.

Texas state parks are slated to reopen on Monday, April 20. Governor Abbott rolled out his timeline to restart the Texas economy on Friday afternoon.

Governor Abbott added that visitors will not be allowed to gather in groups larger than five people and must maintain social distancing. Park visitors will be required to wear protective masks. “Your physical and mental health are important especially in times like these. Going to parks is an effective way to address those needs, so state parks will be reopened beginning this coming Monday,” Abbott said.

Abbott added that Texas retailers will now be allowed to offer “to-go” options for customers.  Abbott said he would announce additional openings and restrictions on Monday, April 27.