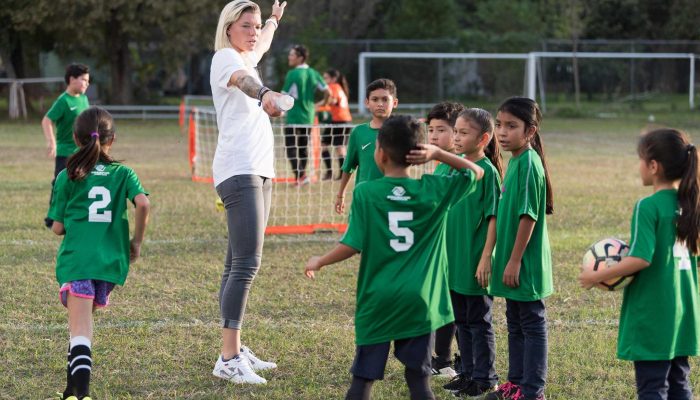 Houston Dash goalkeeper Jane Campbell was getting ready for bed the night before the team’s first preseason scrimmage when her phone buzzed with a life-changing text: The 2020 National Women’s Soccer League season was being postponed — canceling all games and team practices — to stop the spread of the novel coronavirus.

Houston Dynamo players, who had already played two home games, received the same news. There would be no professional soccer being played for the foreseeable future, and if they did play, it would likely be to a stadium with zero fans allowed.

“When I woke up the next day, I thought ‘Oh my god, what do we do?’” Campbell said. “For me personally, I really struggled that first week. I didn’t know what was going on and what my purpose was. This decision goes way beyond soccer.”

Campbell thought about the stadium employees and team staff that would be affected by furloughs or layoffs.

Soccer #goals: How to eat, exercise and live like the Houston Dash pros

The country turns to sports when it needs a bit of happiness, she said. Since she couldn’t play, she found another way to help.

Campbell is raising funds through Athletes for Relief, a nonprofit organization that enables professional athletes from all sports to raise money to support a cause. In this case, the cause is COVID-19 relief funds for health care workers, school funding and small business aid.

“If we can impact the community by doing a phone call or stepping out and helping with food drives and meals, it goes such a long way,” Campbell said. “We’re all very fortunate to play the game of soccer for a living, and I’m very thankful I’m in the position I’m in. There are people we need to take care of so the whole country can run smoothly after the virus is over with.”

Campbell is one of many Dash and Dynamo players finding ways to help during the COVID-19 pandemic. Stadium employees, season ticket holders and other staff members have also pitched in.

On May 2, the Dash and Dynamo will partner with the American Red Cross, Memorial Hermann and MD Anderson hospitals for a blood drive at the BBVA Compass Stadium, 2200 Texas Avenue.

“In the past, players and staff will go and volunteer multiple times a year,” Holland said. “Now, two of our staff members, Jose Arroyo and Moe Lerma, started a social media challenge to get their friends to donate to Kids Meals.”

The challenge involved Arroyo and Lerma shaving their heads on Instagram Live; they raised more than $800 for the nonprofit.

Well before the pandemic started, the teams kicked off a new program for kids, “Soccer Starts at Home,” which demonstrates skills for families to work on from home. The website is packed with free soccer tutorials, a skill video library and parent checklist. It can also work as a substitute for a child’s physical education class, Holland said.

Renew Houston: Get the latest wellness news delivered to your inbox

The program is based on Tom Byer’s book of the same name. Byer played professional soccer in the U.S. before moving to Japan and coaching youth athletes there.

Campbell said learning ball skills at an early age is crucial. She played tennis and basketball growing up, which have helped her as a professional goalkeeper.

Typically, a sports team is something for a community to rally behind, Campbell said. In return, the athletes are taking the time they would normally be practicing together and playing to give back to the communities that support them.

“The city of Houston has helped me so much as a player and a person and has welcomed me with open arms,” she said. “My mindset is to try to help and bring some form of happiness and support for Houston fans and fans from all over the country and world.”

About the Author: By Julie Garcia, Staff writer