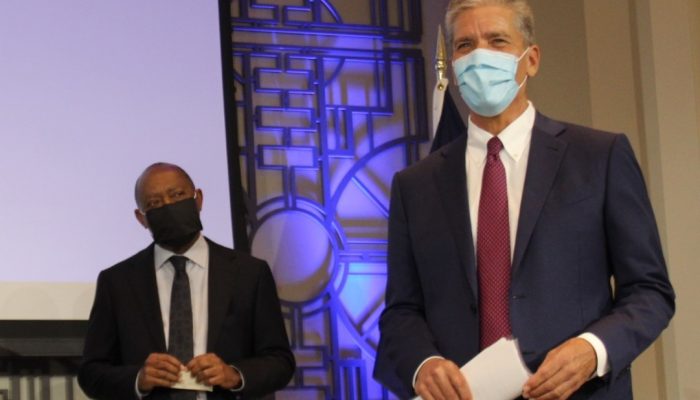 Both Houston and Harris County on Monday named leaders to head COVID-19 recovery efforts, working together to help the region rebound from the COVID-19 pandemic.

The mayor did not give specifics on Odum’s authority, but did say the former oil executive was given “broad discretion” to come up with solutions and strategies to lift restrictions.

“Based on what Marvin did during Hurricane Harvey…the result was masterful, and it laid the groundwork for what we needed to do moving forward,” Turner said. “Quite frankly, if he speaks, he speaks for me.”

Shortly after Hurricane Harvey, Odum was selected for the volunteer chief recovery officer position. During his tenure, he helped establish a national rule that allow cities to count volunteer hours and donated materials towards FEMA fund matching.

He stepped down from that role in November of 2018.

At a press conference earlier Monday morning, the county named State Rep. Armando Walle  (D-Aldine) to help lead the efforts. Walle serves on the appropriations, higher education and redistricting committees in the Texas House of Representatives, and Hidalgo said his primary focus in office has been directly related to health and economic issues.

In their new unpaid roles, Walle and Odum will work together, with other local leaders, to look at steps to “lead relief and recovery with a range of stakeholders,” Hidalgo said.

That includes relief for small business owners, but will also focus on underserved areas, and look at providing relief for workers, including undocumented workers, Hidalgo said.

“The goal of this is to make sure that our relief and our recovery is inclusive, that its fast and that it’s coordinated,” Hidalgo said.

While the sharp increase in COVID-19 cases in Harris County appears to be waning, it was still important not to relax efforts at social distancing to stop the virus’ spread, Hidalgo added.

Hidalgo said her first responsibility is to protect peoples’ safety, and that the czars would be able to focus more on economic recovery.

“We’re still, very much, in the thick of this fight,” Hidalgo said. “From the moment I wake up every morning, to the second I close my eyes at night, I’m thinking about saving lives, and I’m thinking about how quickly we can get through this to get the economy back on track. Every time I hear of a new death, every time somebody loses their lives, gets sick, loses a loved one, I think about how all of this, each of those deaths can be prevented to the extent that we stay home and stop spreading the virus to other people. My only priority is preventing those deaths.”

Both Czars said the goal was to make sure relief and recovery are fast and coordinated, but also smart and timely. Both the mayor and county judge said they were eager to reopen businesses, but only after the virus has peaked.

Walle reiterated that point, and added he and Odum would work closely with “regional stakeholders…including from the private sector, faith-based organizations, nonprofits, and local governments.”

“We need to save lives, while also saving livelihoods,” Walle said.

Haya Panjwani contributed to this report.