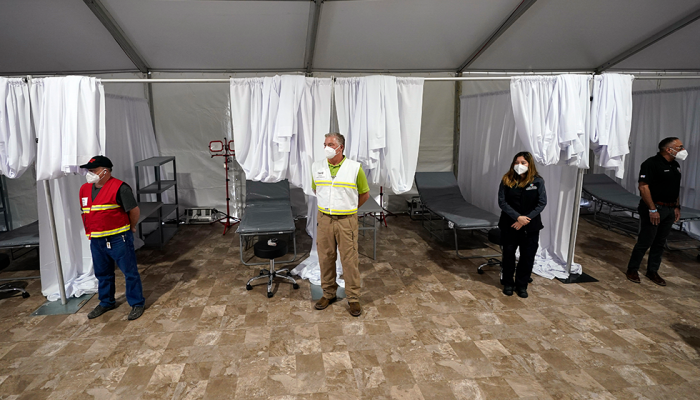 Houston attorney Troy Chandler is a big guy—6-foot-2 and 250 pounds—but on March 12 he felt as though he’d been hit by a truck. The first time he went to the emergency room at Houston Methodist Hospital, doctors “looked at him like he was crazy.” He hadn’t traveled abroad or been exposed to anyone known to be infected with COVID-19, and his temperature was only 100.3. Maybe he just had a cold made worse by seasonal allergies, they said.

Six days later, Chandler rushed back with a spiked temperature, a wracking cough, and labored breathing. This time, he was led by nurses shrouded in layers of personal protective equipment to the COVID-19 section of the ER ward, where a physician consulting via iPad ordered a test that confirmed his fears. Chandler had coronavirus—one of 531 cases confirmed in Harris County last month.

Chandler, 52, was released after a few hours in the ER, but spent two weeks convalescing at his West University home with barely enough energy to shuffle between his bedroom and bathroom. He didn’t hesitate when Methodist doctors called about two weeks later to ask him to participate in an experimental treatment they were developing for COVID-19. “I said I was happy to. Because who wouldn’t help if they could?”

He became part of what is now a rapidly expanding national study of whether plasma from recovered COVID-19 patients might provide a lifesaving treatment for those still suffering the worst symptoms—an idea based on a century-old method of fighting viral infections. During the Spanish flu epidemic of 1918, doctors first began to realize that transfusing plasma taken from patients who had recovered could help provide antibodies for others who remained seriously ill.

This present-day plasma effort already involves 952 physicians at 1,046 registered sites nationwide. So far, 436 patients are enrolled, and, as of April 15, at least 118 have received infusions, according to information compiled by the Mayo Clinic, which is coordinating research efforts.

On March 28, the day the FDA issued its approval, Houston Methodist became the first academic hospital in the nation to deploy the therapy, which involves collecting about one quart of plasma from a survivor—enough to use to transfuse two people still struggling to recover.

Texas doctors say they don’t have enough proof yet to say if it works. But this old-school treatment has shown promise in reducing viral loads and improving lung function in patients in two limited Chinese studies.

But a major obstacle to rolling out broader plasma collection and infusion efforts remains a lack of testing for COVID-19. The scarcity of tests in Texas and elsewhere means many healthy people who suffered only mild cases were never formally diagnosed and thus can’t donate plasma—even though they might be the best possible candidates. At present, hospital officials say no reliable tests exist for identifying COVID-19 antibodies in plasma, so the only way to learn if someone could contribute to the effort is if they were tested for COVID-19 while sick.

That’s why Methodist physicians began their study by calling some of the 230 patients who’d already been treated in that segregated COVID-19 section of the ER, people like Chandler.

Chandler has donated plasma twice now. On Friday, he’ll be driving down to Houston Methodist’s office tower to donate again—meaning he could save as many as six lives if it works the way physicians hope. He knows there’s no proof yet, but his doctors have told him that “they haven’t lost a patient that has taken this infusion and that all of their patients were ICU patients, and so that was very exciting.”

Chandler, an attorney, is mostly working from home these days. He’s almost certain his wife and at least one of his sons experienced mild cases of COVID-19 too. But they were never tested and can’t donate. He wishes his family could do more.

During the Spanish flu epidemic of 1918, doctors first began to realize that transfusing plasma taken from patients who had recovered could help provide antibodies for others who remained seriously ill.

The plasma collection and transfusion process for COVID-19 in the United States started with Methodist but has rapidly expanded, first to 40 hospitals as of last week and now to more than 1,000 sites. Methodist and others in that network are working together to share data and monitor the progress of patients treated with plasma infusions, Patti Muck, a spokesperson for Methodist, told the Observer.

The Food and Drug Administration has helped speed those efforts along by publishing formal study guidelines and encouraging individual donors (patients who were formally diagnosed and are at least two weeks post-recovery) to contact the American Red Cross to explore donation options. The American Association of Blood Banks recently set up a website to help people who have recovered from COVID-19 learn where they can donate too.

In Houston, the plasma collection effort is still being led by an elite research team at Methodist. As of last week, that team had treated 11 of its sickest patients and taken plasma from 10 donors. They’ve now doubled that effort to 23 patients and 20 donors, including some like Chandler who have donated multiple times, Muck said Wednesday.

Meanwhile, various local governments in Texas have been moving to boost the availability of COVID-19 testing too. Galveston County announced it will offer free tests to anyone.

Elsewhere, government-driven research efforts are underway to determine whether a simple finger-prick blood test could be used to inform people whether they already have COVID-19 immunity. In Los Angeles, author Susan Orlean, who appeared at the Texas Book Festival to talk about her bestselling Library Book in 2018, was among those lucky enough to get tested. Orlean told the Observer via email that she wanted to know whether she could donate blood and whether she could help protect her family as its designated shopper. “I had hoped for two things: One, if I had antibodies, I would definitely have donated blood. Secondly, if I had antibodies, I would take over all the grocery shopping, etc., for my family, since I would presumably be immune. (The test was limited to one per household, so my husband and son were not able to take it.)”

Back in Houston, Chandler snapped a selfie after he finished his latest round of plasma donation on Wednesday. This time, the whole process took only 45 minutes. He’s hoping that other Texans soon will be lining up to help too.

Read more from the Observer: