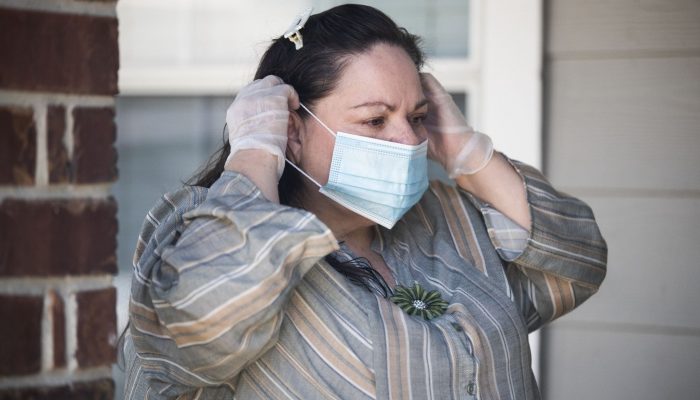 Estela Fuentes, a Channelview kidney transplant recipient, felt her heart palpitate when she learned she’d tested positive for the new coronavirus. When doctors mentioned a clinical trial testing the experimental therapy, she jumped at the opportunity.

A day later, her nephrologist told her he wasn’t sure it was such a great idea. It might or might not help her beat the disease, he said, but he would probably have to take her off her kidney medication, possibly causing the organ to lose function and her to need dialysis. You need to make a decision, he said.

“I already made my decision,” she replied.

Fuentes enrolled in the Houston arm of a global trial of remdesivir, an antiviral drug that may be the best therapeutic hope in the fight against COVID-19, the disease caused by the coronavirus currently spreading in Houston and around the world. While research involving hydroxychloroquine, an anti-malarial drug touted by President Donald Trump, and transfusions of blood plasma taken from people who’ve recovered from COVID-19 have attracted more attention, remdesivir is the would-be therapy farthest along in the testing process.

Early research results have been promising. In a study published in the New England Journal of Medicine 10 days ago, nearly 70 percent of 53 patients given remdesivir through what’s known as “compassionate use” required reduced oxygen support and 17 of the 30 on ventilators were able to come off them. Then, last Friday, the online health news organization STAT reported that a University of Chicago video shows a doctor saying the institution’s hospital has discharged most of the 125 participants in an ongoing remdesivir clinical trial, almost all of whom had severe disease.

But researchers were quick to note those research efforts didn’t include a group of patients who received a placebo instead of the drug, important for comparison purposes. Such studies, the gold standard of drug testing, are necessary to provide evidence of a therapy’s effectiveness and win Food and Drug Administration approval.

That’s the advantage of the trial in which Fuentes is participating, the most rigorous of a number being conducted. Patients sick enough to require hospitalization are randomly assigned to receive either remdesivir or a placebo, both delivered by infusion for up to 10 days, at 40 academic hospitals around the nation and globe. Baylor College of Medicine is leading the effort in Houston, the National Institutes of Health the overall project.

Early results from the trial are expected by the end of the month. Investigators will compare outcomes in both those who received remdesivir and those who received a placebo to determine whether the drug actually produced more of a clinical benefit. Outcomes are scored on a eight-point scale ranging from fully recovered to death.

“Depending on the data, we should have a better idea then whether we have a therapy that could help COVID-19 patients or we need to examine other options,” said Dr. Hana El Sahly, a Baylor professor of molecular virology and microbiology and the principal investigator of the Houston research.

The study is double blinded — meaning neither the participant nor the experiments know who’s receiving the actual treatment — so even El Sahly doesn’t know how it’s going.

CORONAVIRUS CHRONICLE: Subscribe to our new daily podcast for pandemic insights through a Houston lens

Therapeutic agents are desperately needed for the disease, which causes mild or moderate symptoms most of the time but has killed more than 167,000 people around the world, including 41,000 in the U.S. The risk of death, most often pneumonia, is greatest in older adults and people with underlying conditions.

Effective treatment could enable the loosening of stay-at-home restrictions, the best defense people currently have. There is no approved therapy or vaccine.

Remdesivir was born as a general antiviral candidate in the early years of the 2010s and showed promise against the new coronavirus’ older cousins, SARS and MERS, in previous preclinical testing. It was tried against Ebola in 2015, but did not perform as well as other candidate drugs and was dropped.

But the new coronavirus, SARS-CoV-2, could be a better target. Remdesivir, which works by interfering with the process coronaviruses use to make copies of themselves in the body, reduced the severity of symptoms in animals with SARS and MERS when given early enough in the course of the disese. More recently, the therapy prevented disease progression in monkeys infected with the new virus, according to an NIH study.

“There’s only one drug right now that we think may have real efficacy,” Bruce Aylward, an assistant director-general at the World Health Organization, said at a briefing in Beijing in late February. “And that’s remdesivir.”

The NIH trial’s first patients, back in February, were those Americans repatriated after being quarantined aboard the Diamond Princess cruise ship that docked in Yokohama, Japan. It has grown to more than 700 patients since then, said El Sahly, including about 15 at either Baylor St. Luke’s Medical Center or Ben Taub Hospital.

Gilead Sciences, remdesivir’s manufacturer, also has provided the drug to more than 1,500 COVID-19 patients on a compassionate use basis, so many it had to suspend the program in March. It subsequently has said it has 1.5 million individual dosages, enough for at least 140,000 patients, and has set a goal of making 500,000 treatment courses by October and more than a million by the end of the year.

El Sahly noted the NIH “adaptive” trial is in the first stage. If patients getting remdesivir fare better than those on the placebo, the drug would move to a second phase, where it typically would be compared to another drug to determine the most effective therapy.

Fuentes ultimately remained on her kidney medication, the dose lowered. She said she didn’t notice a difference after receiving the infusion and still doesn’t know if she got a placebo or the actual drug.

She was discharged a few days later and is doing well, “though very tired,” back at home, where her husband and two grown daughters also have the virus.

“It was hard,” said Fuentes, 53, a homemaker who sometimes teaches at a biblical institute. “I just kept telling myself I was in the hands of good doctors and God.”

Marie DeJesus contributed to this story.