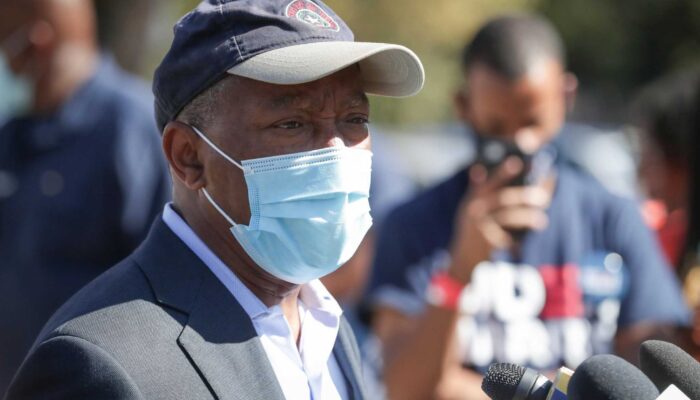 
Houstonians could receive checks of up to $1,200 from the city this month, as City Hall prepares to launch a new relief program aimed at getting money to residents struggling to get by during the COVID-19 pandemic.

The city is poised to use up to $30 million to open a direct assistance fund, similar to one launched last month by Harris County, this week. It also hopes to add $10 million to its small business relief program. City council will consider both items at its Wednesday meeting.

The direct assistance could help residents make rent, pay off mounting bills, acquire childcare, buy groceries, or otherwise use it as they see fit. It could help as many as 23,750 families with daily expenses.

“People can utilize that on whatever — utility, rent, you name it,” Mayor Sylvester Turner said. “We’re doing everything we can with the dollars we’ve been given to try to meet those needs or people where they are.”

Community nonprofit BakerRipley will administer the funds. The organization previously ran the city’s rent relief program. The eligibility requirements and application portal are not available yet, but the city hopes to finalize them this week to get the money out quickly, said Ben Melson, chief of staff to Houston Recovery Czar Marvin Odum.

About 25,000 Houston residents applied to the county’s program and did not receive checks, Melson said. The city’s program would start by trying to address their needs.

Eli Barrish, who leads the COVID-19 task force for Texas Housers, a nonprofit focused on housing and community development, said the need for assistance is clear. The latest biweekly survey from the U.S. Census Bureau indicated that 22 percent of Texas renters who make less than $50,000 per year said they could not make rent last month; 45 percent expressed little to no confidence they would be able to do so next month.

“I think the fewer strings they attach to the money, the better,” Barrish said. “Direct cash transfers have a great impact. People know their own needs, they know what they need to spend money on.”

Other local governments in Texas, such as Austin and Harris County, have launched similar programs.

Houston should ensure it does not place overly stringent or complicated qualifications for the program, Barrish said.

Jamie Watson, a member of St. James Episcopal Church in Third Ward and a leader with The Metropolitan Organization, a network of congregations advocating for low-income communities, said those groups heartily support the relief program.

“We just want to make sure that these individuals receive the help they so desperately need,” Watson said. “They’re surviving the best way they can. They can’t buy food because they’re trying to keep whatever pennies they have to keep the lights going, or to make a payment on rent.”

Echoing Barrish, Watson said she hopes the documentation requirements for the program are minimal, so the funds are available to those who need it most. She said some people struggling to get by do not have tax documents for their last jobs, for example. Their failure to pay rent or utilities should demonstrate they are not bringing in income, Watson said.

If approved, the new program would mean the city has allocated roughly a quarter of its $405 million in stimulus money from the CARES Act on direct relief efforts. That includes $30 million for rent relief, $30 million for small businesses, up to $28.5 million for direct assistance, and a few million dollars for smaller initiatives for artists, musicians, childcare organizations and others.

The city must spend the CARES money by the end of the year. Houston and other cities have sought an extension of that deadline, but it is unclear if the federal government will grant one.

City leaders have allotted as much as $28.5 million for the direct assistance program, with up to $1.5 million going to BakerRipley to operate the program. The amount given out will depend on how quickly the city and BakerRipley can administer the funds before the Dec. 31 deadline.

About the Author: Dylan McGuinness