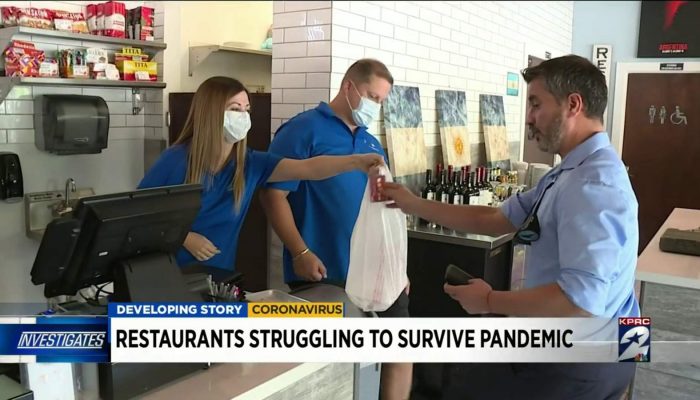 HOUSTON – “It’s just not easy you know, struggling the way that we are. We’ve been here for 10 years and we never thought we would be in this situation.”

Greisy Perekalski and her husband own two restaurants in Houston — the Argentina Cafe in the Galleria and The Empanada Factory in Greenway Plaza — and like most owners, the COVID-19 pandemic has taken a toll.

“We are going through very hard moments as small business owners,” Perekalski said. “We tried to apply for the (Paycheck Protection Program) loan, we didn’t get anything from it. We didn’t even hear back.”

Not long after the stay-at-home order was issued nearly two months ago, cash flows started drying up and many restaurants started furloughing or laying off employees.

“This is our life, this is where we feed my family from, my home, my kids, our employees. I feel so bad for a lot of them,” Perekalski said. “We’re taking it day-by-day, but there are days where we’re like ‘Wow, how are we going to pay our expenses’, you know? It’s just tough.”

Restaurants make up a large piece of the Texas economy, especially in Houston, where there are as many as 350,000 people working in the industry. According to the Texas Restaurant Association, a staggering 61% of those workers are currently out of a job. Statewide, restaurants contribute $70 billion each year, with Houston producing $15 billion of that on its own. Before the pandemic, there were more than 13,000 restaurants in the greater Houston area.

Texas Governor Greg Abbott knows how important is to get them reopened, but also knows it’s important to do it the right way.

“What we want to do in the state of Texas is to slowly, but safely, begin to open up multiple sectors of our economy,” Abbott said.

“If you pick ten Texans who have jobs at random, one out of every ten of them work in the restaurant industry,” said Mark Jones, a researcher who helped put together a report from the University of Houston’s Hobby School that focuses on how restaurants are surviving and changing their business plans in a world with COVID-19.

Jones says owners are hoping for good news from the Governor in terms of reopening, including dine-in options, but some are bracing for the worst.

“About one in five [will] either permanently or temporarily close their restaurants,” Jones said.

A new way of thinking

Since the coronavirus outbreak began in the Houston area in early March, local restaurants have either shut down or modified their operations to avoid financial starvation.

“You can order brunch over the weekend and add a produce box or a gallon of milk or eggs,” Lyons said.

Perekalski is also aware of the financial challenges her customers are facing.

“There is a lot of people that have been laid off,” Perekalski said. “So how can they get the luxury of going out to dine as before when they don’t have a steady income coming through?”

Other restaurant owners say they will remain closed, even if they get the green light to open in the near future.

“I wouldn’t open,” said Barry Childers, who has owned Barry’s Pizza in the Galleria area for nearly 40 years. “I think it would be risky for my staff and risky (for customers).”

One thing most restaurant owners agree on is that it won’t be business as usual.

“It’s not going to be like before,” Perekalski said. “It’s a new lifestyle for all of us, not only for us in the restaurant business. But, of course, we cannot fill this up right now, because it’s not safe health-wise, so I’m thinking it will take some time to get there.”

About the Author: Mario Diaz