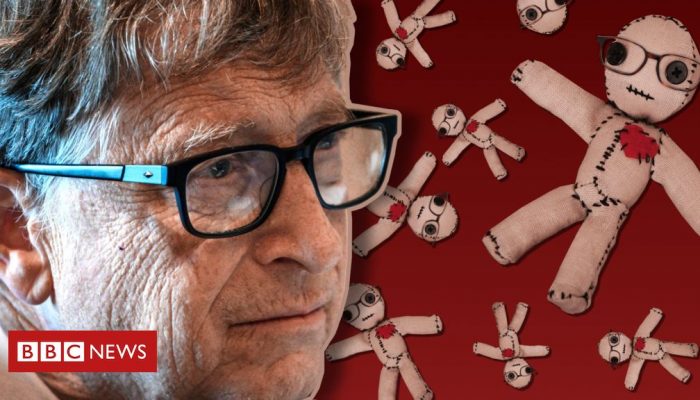 In 2015, an unassuming-looking Bill Gates came on stage at the TED conference in Vancouver to issue a dire warning.

“If anything kills over 10 million people over the next few decades, it is likely to be a highly infectious virus rather than war,” he told the audience.

His prescient words picked up some coverage at the time, including from the BBC – but largely went unheeded.

But now, the video of this talk has now been viewed more than 64 million times – with many people more interested in the reasons behind that speech than the talk itself.

Some accuse of him of leading a class of global elites. Others believe he is leading efforts to depopulate the world.

Still more accuse him of making vaccines mandatory, or even attempting to implant microchips into people.

The face of public health

“He is this kind of voodoo doll that all these communities are pricking with their own conspiracies. And it is unsurprising he has become the voodoo doll – because he has always been the face of public health.”

Theories falsely linking Bill Gates to the coronavirus were mentioned 1.2 million times on television or social media between February and April, according to a study by The New York Times and Zignal Labs.

Much of the content is posted to public Facebook groups, from where it is shared millions of times.

First Draft News has also found that Chinese viral video site TikTok is becoming a new home for such conspiracies.

The BBC’s anti-disinformation team has been researching some of the more outlandish ones.

They include claims that the Bill and Melinda Gates Foundation has tested vaccines on children in Africa and India, leading to thousands of deaths and irreversible injuries. One post even suggested he is facing trial in India.He is accused of rolling out a tetanus vaccine in Kenya that includes abortion drugs

A video on the website of The New American Magazine’s Facebook page continues with the theme of mass depopulation via vaccines and abortion, and also links Mr Gates to China’s Communist Party. It was shared 6,500 times and viewed 200,000 times.Meanwhile a video accusing Gates of wanting to microchip people has garnered nearly two million views on YouTube.Rich and famous

So how did the founder of Microsoft, who has poured billions into global healthcare from the philanthropic foundation he runs with his wife Melinda, become the bogeyman of Covid-19 conspiracy theorists?

Prof Joseph Uscinski, a political scientist at the University of Miami and author of books on conspiracy theories, believes it is simply because he is rich and famous.

“Conspiracy theories are about accusing powerful people of doing terrible things,” he told the BBC. “The theories are basically the same, just the names change.

“Before Bill Gates, it was George Soros and the Koch brothers and the Rothchilds and the Rockefellers.”

And while the majority of conspiracy theories “die on the vine”, the ones that endure are those that offer “big villains and address issues that people care about”.

“It should come as no surprise that rich people and big corporations are being accused of conspiring to put chips in our necks because that is a thing we fear,” he said.

“This has been the ammo of conspiracy theories for a long, long time.”

While he thinks such conspiracies have “no tether to the truth whatsoever”, people still seem to be falling for them.

More than a quarter of all Americans and 44% of Republicans believe that Bill Gates wants to use a Covid-19 vaccine to implant microchips under people’s skin, according to a survey from Yahoo News and YouGov.

Mr Smith thinks that there is often a “kernel of truth” which is taken “way out of context”.

If conspiracy theories are widely believed, it could affect the uptake of coronavirus vaccines

So, for example, the Bill and Melinda Gates Foundation did fund a study, conducted by the Massachusetts Institute of Technology last year, which looked at the possibility of storing a patient’s vaccination history in a pattern of dye. It would be invisible to the naked eye, and could be delivered under the skin at the same time as a vaccine.

It is difficult to ascertain the root of conspiracy theories – but it’s thought the internet is making them spread further.

And, he added, conspiracy theories had particularly flourished during this global pandemic because people were “psychologically vulnerable”.

“This crisis is unprecedented in size and scope and the advice shifts as new studies are published. There are large areas of uncertainty and humans abhor uncertainty,” he said.

To deal with it, individuals resort to something he calls collective sense-making.

The Bill and Melinda Gates Foundation, which has committed $300m (£240m) to combat Covid-19, has remained sanguine about the barrage of false claims.

In a statement to the BBC it said: “We’re concerned about the conspiracy theories being spread online and the damage they could cause to public health.

“At a time like this, when the the world is facing an unprecedented health and economic crisis, it’s distressing that there are people spreading misinformation when we we should all be looking for ways to collaborate and save lives. Right now, one the best things we can do to stop the spread of Covid-19 is spread the facts.”

In an interview with the BBC, Bill Gates expressed surprise that he had become the figurehead of such theories.

“It is troubling that there is so much craziness. When we develop the vaccine we will want 80 percent of the population to take it and if they have heard it is a plot and we don’t have people willing to take the vaccine that will let the disease continue to kill people.”

I’m kind of surprised some of it is focused on me. We are just giving money away, we write the cheque.. and yes we do think about let’s protect children against disease but it is nothing to do with chips and that type of stuff. You almost have to laugh sometimes.”