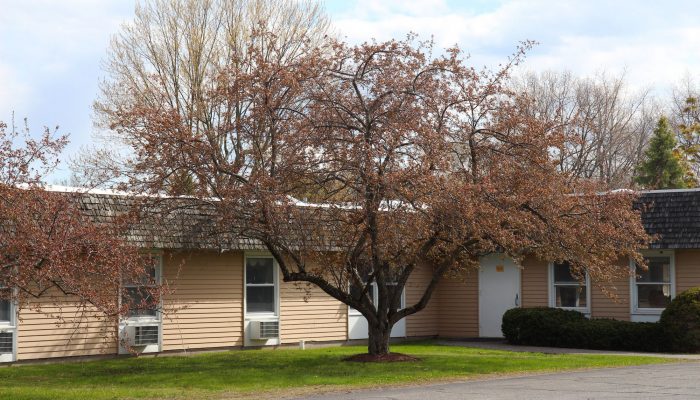 When COVID-19 began to spread around the country, it quickly became evident that elderly people, especially those with underlying health conditions, were at the highest risk of dying from the disease. That means nursing homes became high risk environments. And in Burlington, one such nursing home found itself bearing the brunt of the deadly pandemic.

Seven Days reporters Colin Flanders and Derek Brouwer wrote about the devastation at Birchwood Terrace Rehabilitation and Healthcare, where 21 of the state’s 55 confirmed coronavirus deaths have occurred as of early June.

Colin Flanders spoke with VPR Morning Edition host Mitch Wertlieb about the death toll at Birchwood. This interview has been edited and condensed for clarity.

Colin Flanders: Birchwood for weeks had been preparing for this. They had shut down their visitation a few days before Gov. Scott had asked all elder care facilities to do that in mid-March, and they had a few negative tests. They sort of viewed them as dry runs, where they would have someone with symptoms, they would shut down the room and they would make sure they wore PPE whenever they went in.

In late March, they had a patient who had come from UVM Medical Center. He had been there for about a week. He had started showing symptoms. They tested him, it turned out he had the virus. And their first move was to sort of shut everything down on that unit. And they tested everyone else on the unit to try to make sure that they had succeeded in containing the virus. And within just two or three days, they quickly learned that the virus had spread far beyond what they could have imagined. Within just four days, they had realized that patients on every unit had it. It was about 26 patients at that point.

For a timeline outlining Vermont’s response to COVID-19, head here.

Mitch Wertlieb: I mean, that’s remarkable because, as you say, they were preparing for this. It sounds like they were not caught unawares. Is there any indication of why Birchwood was so disproportionately affected then?

At this point, there is no indication. I mean, a lot of these postmortems are going to be happening over the weeks and months to come. We’ve talked to the health department about this. They actually had inspectors in there during the outbreak to make sure that they were doing everything they’re supposed to. And they found that they were. There’s really no indication at this point definitively of why it spread like it did.

One thing to know about elder care facilities in general is that it’s really hard to prevent the spread of a virus like this. They’re close quarters. There are  usually communal dining spaces. And even when you shut those things down, there are some residents, especially in the memory care unit, where it’s hard to keep them confined to their rooms in Birchwood. They have this long hallway and they cut it into thirds and then cut it again into many units to try to keep everything contained. And even that didn’t stop it.

Were the workers and the residents well enough protected, though? Did they get help from state officials? Did they have things like masks and protective equipment?

Yeah. So early on, like a lot of health care facilities, Birchwood was trying to preserve its PPE. There was a point right after the first case where they had some of their managers out preparing to buy raincoats to use instead of gowns and they weren’t wearing N95 masks until the first confirmed case on their unit. And that was just to preserve the PPE as long as they could because they were quickly running out. And that was true at even some of the major hospitals around the country.

The state did provide a large shipment of PPE right after the first case, and that helped them carry through. But by that point, a lot of patients were already sick. A lot of the nursing managers that we spoke with felt like they were adequately prepared. But there were, of course, concerns that they weren’t wearing PPE early enough. And I think a lot of that comes down to preserving what they had.

One of the things that you write about in this article that that’s really striking is how this affected staff members emotionally. I mean, to see so many of the people that they care for succumb to this disease. What did you find out from reporting and talking to the staff there?

Yeah, that was one thing I personally didn’t appreciate as much as I do now. A lot of these patients, the average patient on, for example, the long term care or the memory care units, the average patients stay there three years. There are some patients who have been there five, 10 years. There’s one patient who’s been there 15. One person described it to us as these people are like grandparents to some of these staff members. And there’s a stretch in mid April where they lose six patients within 48 hours. And that’s like losing your grandparents every few hours. I mean, it’s, it’s really hard to fathom the impact that this had on these people who show up to work every day and spend 40, 50 hours with these people. They get to know them. They get to know their families. It’s just a tremendous impact.

What about moving forward, Colin? Because there must be concerns now about the slow easing of restrictions as Vermont’s economy starts to slowly reopen. Are there concerns about a second spike that could hit places like Birchwood and other health care facilities?

That’s a big concern for everyone. I think Birchwood is obviously wary of that, but I think the state in general is recognizing that. Gov. Phil Scott has said multiple times that as we begin to open things up, long term care facilities will probably be last on this. And I think that’s a recognition of the vulnerability that they have.

The state is looking at maybe some sort of visitation policy that would allow people to visit their loved ones outside and stay socially distanced. I think it’s tough because you have to balance the fact that keeping these people confined to their rooms, isolated in quarantine, that doesn’t help their health either. It’s a really delicate balancing act. But I think, with Birchwood, this case really shows that you’ve got to be careful.

More from VPR: ‘My Mother Was My Best Friend’: Remembering A Life Lost To COVID-19