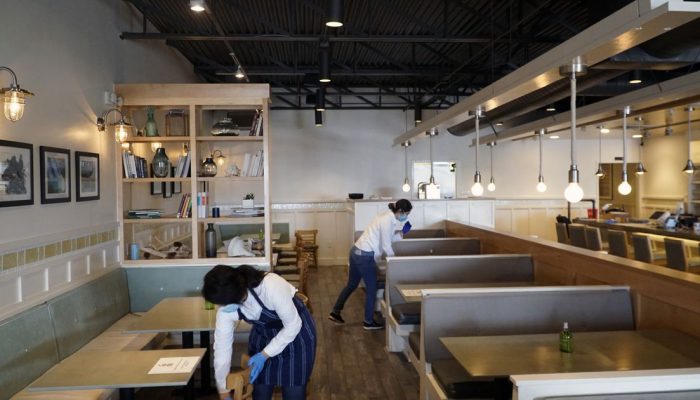 
The new centerpieces adorn the tables as the staff at TJ’s Seafood Market and Grill on Royal Lane prepares for one last training run before re-opening to diners for the first time 66 days.

They no longer consist of votive candles or succulents. They have been replaced by the style statement of the moment: Translucent sea green hand sanitizer pumps.

Welcome to dining out in the time of coronavirus.

After the requisite temperature checks and screening questions, which is the new staff sign-in procedure, energetic owner Jon Alexis ran through changes big and small Tuesday evening in the steps of service for his re-assembled staff. Menus go drink-side up because diners are going to want cocktails after two months of sheltering-in-place. Leave one on the table so they have it for dessert options, and throw the rest away. Remind the guest of the hand sanitizer on the table. And do it again after presenting the check. Offer cracked pepper with the Caesar salad, but no longer bring the mill to the table; bring a disposable ramekin with it. Hot sauce for the gumbo? Same thing. And so it goes.

“Oh, and change gloves all-the-freaking-time,” Alexis says through his own mask.

While he continued to operate takeout and his small fish market through the first stages of the shelter-in-place order, Alexis, 40, did not initially open his dining rooms at TJ’s and Malibu Poke when Gov. Greg Abbott first allowed restaurants to do so at 25 percent capacity on May 1. He waited and watched.

TJ’s Seafood employees clean chairs and tables in preparation for re-opening the inside to the public at the restaurant in Dallas, Texas on Friday, May 15, 2020. Every other table will be used for social distancing and hand sanitizer will be at each table.(Lawrence Jenkins / Special Contributor)

Now, as the state prepares to allow restaurants to go to 50 percent on Friday, Alexis feels more prepared to dive into the deep water. He opened on Wednesday and will have about a dozen tables available under the new policy.

“We just weren’t ready to jump back in,” he said. “We didn’t want to rush. We wanted to see what diners’ expectations would be. We know that people’s money is real. If I’m going to sell a $36 entrée, I want to be confident that people are going to feel they are getting a good value for their money.”

He also did something else. He partnered with Dr. Nick Karr of SafeWork to provide mobile periodic COVID-19 testing for his employees. They had their first test two weeks ago and will have another on Friday. Safework is trying to bring mobile COVID-19 testing to the workplace, particularly the service industry. TJ’s is believed to be one of the first restaurants in the city to offer testing for its employees.

Among those who were tested two weeks ago is server Sophia Ramirez, 31. Ramirez has worked at TJ’s for a year and remained on staff during the dining room shutdown. She has a 2-year-old at home and had all the same fears about COVID-19 as any parent.

“It eased the anxiety a little bit,” she said of getting the test results.

Olivia Jimenez, 29, is new on staff. She had most recently worked at Slaters 50/50 on Lower Greenville, but the restaurant has not re-opened, and through a connection with Ramirez found her way to TJ’s. Alexis had staff openings because he found that some employees weren’t willing to come back to work, regardless of the situation.

“I haven’t seen my mom in two months,” Jimenez said. “She’s got kidney problems and is on dialysis. I drive by and wave to her. I’m trying to be cautious. This makes make me all the more cautious.”

Alexis is a Type 1 diabetic, which puts him at elevated risk for complications if he contracts the coronavirus, so he’s well acquainted with the risks involved. As he goes through training with the staff, he reminds them to be vigilant about social distancing and sanitation. That should be the restaurant’s worry, not the customer’s.

This was reinforced over the weekend when he hosted ticketed three-course wine dinners with a fixed menu in a dry run at getting back into full-scale restaurant service. And, as a fish monger, he long ago had to re-assure diners of the freshness of his product and the cleanliness of the room.

He points to his most recent health inspection score. It came on the day the shelter-in-place order was to take in effect. Scored a 95. Best he’s received in the last three years.

“If you are doing things right, this really shouldn’t be that much of a change,” Alexis said. “We were far more worried than the [customers]. They just wanted to feel ‘normal’ again. We are a neighborhood restaurant. They wanted to feel able to go out in their neighborhood again.”

But it does mean policing social distancing policies, and a lot of that will fall on William Boisture, who has just finished his sophomore year at Kansas. Online, of course.

Boisture, 20, worked last summer as a busboy and host. Now, he’s going to have to make sure that guests don’t loiter in a tight space while waiting for tables.

“We can have a lot of people waiting in a small space,” Boisture said. “Spacing them out is going to be important.”

To this, Alexis has one reminder: Do everything politely.

Suggest waiting over there. Suggest using hand sanitizer after signing the bill. Politely demure if a guest gets frustrated over staff wearing a mask.

Brett Martin, the bar/food manager, takes over to finish up the presentation. He reminds the staff they bounced back quickly after October’s tornado outbreak closed them for two weeks and devastated the neighborhood.

“After the tornado, I don’t think there is a thing that can stop us,” Martin tells them. “We are all social distancing, but this whole experience is bringing us closer together.”