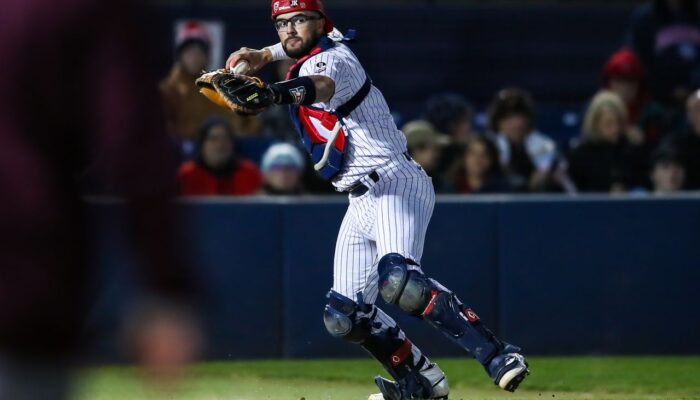 
The Yankees have been waiting almost six months to get a first chance to start working in person with their catcher of the future, if that’s what 2020 first-round draft pick Austin Wells develops into someday.

They’re hoping, and although receiving is the part of the University of Arizona product’s game that needs the most work, it’s been improving despite the pandemic wiping out the entire minor-league season and the Yankees’ Florida Instructional League.

Whether Wells has been home in Las Vegas or residing in his Tucson, Ariz., college town, he’s been doing a lot more than hitting, throwing and receiving on his own. His baseball workouts are filmed, then he and Yankees player development staffers, often a catching instructor, watch together.

The Yankees, like most teams nowadays, are very big on pitch framing, and that’s been one of the things that Wells has been working on.

“It’s getting strikes and trying to develop more in terms of the actual working from low to high in terms of getting the borderline strike,” Oppenheimer said. “On top of that, he’s continuing to throw and develop his arm strength.”

Wells, who was drafted 28th overall as a sophomore-eligible on June 10 and signed for $2.5 million 15 days later, probably will hit his way to the big leagues. Ranked the Yankees’ sixth-best prospect by MLB Pipeline, Wells is a husky 6-foot-2, 220-pound left-handed hitter who generates a lot of bat speed and power. The Yanks think his swing is a great fit for Yankee Stadium, which has the short porch in right field that turns a lot of slugger’s fly balls that aren’t hit great into home runs.

But Wells, who turned 21 on July 12, will bring a lot more value if can do that in the big leagues as a catcher. That’s why the Yanks are reluctant to give up on Gary Sanchez.

By most accounts, Wells is very raw as a catcher because he’s so inexperienced at the position. An injury to his throwing arm in high school forced him to be a designated hitter for his junior and season years, then he caught just 68 games in college, 56 as a freshman and then 12 during his coronavirus-shortened sophomore year.

Some scouts and draftniks predict Wells eventually will switch positions.

“He really projects to play first base,” ESPN college baseball analyst Chris Burke said on air during the draft. “Maybe you can even take him to the outfield.”

That’s not Wells’ or the Yankees’ plan.

“I’m a catcher,” Wells told Yankees writers in a conference call after the draft. “I want to be a catcher. And I know I’m definitely willing to do whatever it takes to get to the big leagues. So it’s at another position, then I’ll just hit home runs at Yankee Stadium and play wherever they need me to!”

Wells could be a quick riser through the Yankees’ farm system because of his bat, but he lost a lot of valuable plate appearances this year by not playing any games since May 25, his last with Arizona.

If there’s a full minor-league season in 2021, he’ll probably be in Tampa starting out either playing short-season, rookie league ball in the Gulf Coast League or jumping to the Florida State League’s Tampa Tampons, which will be low Class A starting in 2021.

“Austin’s got to make up for the at-bats that he missed this year,” Oppenheimer said. “You’ve got to realize with him it wasn’t like he was a three-year college guy. He was a sophomore eligible who had a freshman year and then whatever they played this year, and that’s it. So he still has at-bats to catch up.

“This wasn’t a lost season. He got stronger. There’s technique things and strength things that he’s worked on, but it hurts if you don’t play against competition and play at game speed. That’s the part that sucks. But Austin has got a pretty damn good bat, and that’s exciting.”

Get Yankees text messages: Cut through the clutter of social media and text during games with beat writers and columnists. Plus, exclusive news and analysis every day. Sign up now.

Our journalism needs your support. Please subscribe today to NJ.com.

Randy Miller may be reached at rmiller@njadvancemedia.com. Follow him on Twitter @RandyJMiller. Find NJ.com on Facebook. Tell us your coronavirus story or send a tip here.