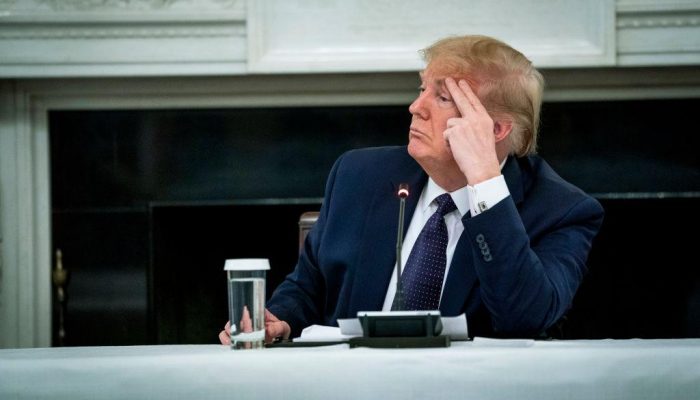 It comes after the President repeatedly touted the drug in the early weeks of the pandemic as a “very strong, powerful medicine” that could be an effective therapy for coronavirus – despite evidence to the contrary.

President Trump says he is taking hydroxychloroquine(Photo: BENOIT DOPPAGNE/BELGA MAG/AFP via Getty Images) Copyright: Getty ImagesSign up to our daily newsletterThe i newsletter cut through the noise

Asked by one reporter for evidence that the drug was effective at treating Covid-19, the President replied: “Here’s the evidence, I get a lot of positive calls about it.”

Here’s everything you need to know:

Hydroxychloroquine – sold in the US under the brand name ‘Plaquenil’ – was first approved in the 1950s as an anti-malaria treatment.

Since then, the drug has been used to treat a variety of diseases and illnesses, such as lupus, rheumatoid arthritis and even for complications regarding Lyme disease.

The Lupus UK website states: “Hydroxychloroquine is generally the first line of treatment for someone who has been diagnosed with lupus.

“It is used for skin and joint involvement, muscle inflammation, fever, fatigue, pleurisy, to reduce the development of renal (kidney) disease and chronic damage, and for its steroid-sparing properties.”

In relations to Covid-19, they say trials are “ongoing”, but there isn’t sufficient evidence to conclude whether the drug is effective in tackling coronavirus.

What are the side-effects of taking Hydroxychloroquine?

Taking hydroxychloroquine as a remedy against conditions it is proven to be effective in treating is not dangerous in and of itself; the danger comes when using the drug in an attempt to treat Covid-19.

The NHS notes that “side-effects are uncommon”, but in some people, hydroxychloroquine can cause the following:

– skin rashes, especially ones made worse by sunlight

– bleaching of the hair or mild hair loss

– tinnitus (ringing in the ears)

How dangerous is it for Covid-19 patients?

The US’ Food and Drug Association (FDA) say they are “aware” of reports of serious heart rhythm problems in patients with Covid-19.

“Hydroxychloroquine… can cause abnormal heart rhythms. These risks may increase when these medicines are combined with other medicines.

“Patients who also have other health issues such as heart and kidney disease are likely to be at increased risk of these heart problems when receiving these medicines.”

“Until we have clear, definitive evidence these treatments are safe and effective for the treatment of Covid-19, they should only be used for this purpose within a clinical trial.

What has Trump previously said about the drug?

The President’s latest hydroxychloroquine comments are in contrast to those made in previous weeks.

The President explained that the drug had shown “very encouraging early results” in tests, and the plan was to make the drug available “almost immediately”.

Trump’s comments appeared to suggest the has fast tracked the approval process for the drug, taking it “down from many, many months to immediate” – but that was not the case.

He then distanced himself from his claims after a clinical trial in US military hospitals showed nearly a third of veterans with coronavirus died when treated with hydroxychloroquine.

“We had some results that perhaps aren’t so good, I don’t know, I just read about one,” he told reporters at the time when questions on his turn of face, “but I also read many times good.”

Now it seems he is back in favour of the controversial drug.

In early April, Forbes reported that President Trump had a “small personal financial interest” in Sanofi, a French drugmaker that produces hydroxychloroquine.

Should we listen to Donald Trump?

Former government chief scientific adviser Sir David King, asked about Trump’s admission, told Good Morning Britain: “I think he speaks from the top of his head and every word he says should be ignored in terms of advice.

“I’m sorry but this is not the pronouncements of a person who is listening to the scientists. He is making it up as he goes along.”