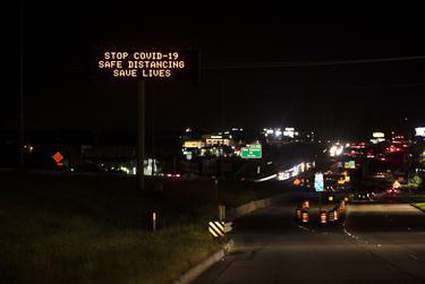 The county began on Wednesday releasing the number of emergency room visits in local hospitals by people suspected to have COVID-19. The first day’s number was 409. And the trend line for that stat has stayed relatively stable for at least the past two weeks, the newspaper reported. Similarly, the county reported 185 new cases Wednesday, down 40 from the day before and part of what the Morning News described as a continued decline.

“It’ll be a kind of happy story this week as the numbers seem to be going our way,” Jenkins told the newspaper in a meeting with its editorial board.

Jenkins and local officials had expressed a desire to keep the economy more closed until a steady decline in new cases occurred over at least two weeks. But the lack of an immediate spike has made him willing to reconsider his assumptions if current trends continue for a couple of weeks, he told the paper.

“We’re not stuck on some arbitrary political solution or static thing,” Jenkins said. “We’re listening to what the science tells us — they’re looking at a novel virus every day and reevaluating.”

But, Jenkins told the paper, he’s still worried about a potential resurgence in new cases this summer. — Matthew Watkins

[4:30 p.m., Wednesday] Texas reported 1,411 more cases of the new coronavirus Wednesday, an increase of about 3% over the previous day, bringing the total number of known cases to 51,323. Hall County reported its first case Wednesday; over 85% of the state’s 254 counties have reported at least one case.

Harris County has reported the most cases, 9,859, followed by Dallas County, which has reported 7,904 cases. See maps of the latest case numbers for each county and case rates per 1,000 residents.

As of Wednesday, 1,791 patients are known to be hospitalized in Texas. That’s an increase of 59 patients from Tuesday. At least 770,241 tests have been conducted. — Chris Essig