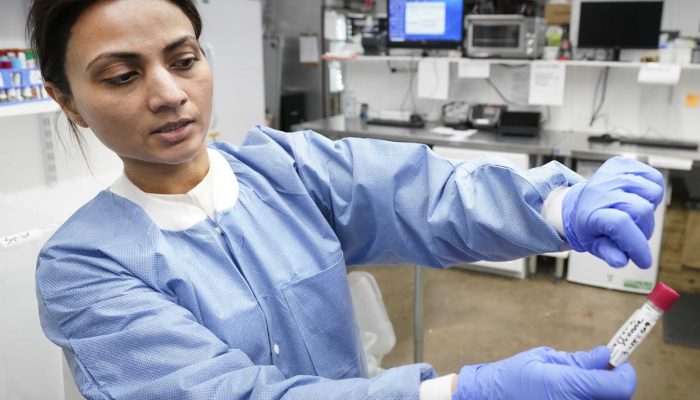 Even before Texas’ first case of the novel coronavirus landed in March in Fort Bend County, Mrudula Rakhade was preparing how her clinical laboratory in a northwest Houston business park could accommodate the testing to come.

Anticipating the need in February to test for the rapidly-spreading virus — back when international travel was the leading source — Rakhade took the lead in ordering COVID-19 supplies for Altru Diagnostics, where she works as the chief scientific officer. She also made the lab one of the few statewide to be registered with the U.S. Food and Drug Administration to identify positive traces of the virus.

By the time her boss of two years, Dr. Jesse Howard, suggested the lab take on COVID-19 testing in March — she had news for him.

“I told him, ‘You’re going to get COVID testing in a week because I had already been working on it,’” Rakhade proudly said.

As Howard, who opened the lab with his late father in 2016, walked by her office Monday afternoon, he said “I trust her blindly.”

CORONAVIRUS UPDATES: Stay informed with accurate reporting you can trust

Now, the 25-employee operation off the Katy Freeway is analyzing more than 1,000 specimens a day, mostly for local medical providers, including four United Memorial Medical Center drive thru-testing sites. Increases in testing have doubled the number of specimens they started with on March 19. Since then, they have analyzed an estimated 20,000 tests or more, Howard said.

Rakhade and her team of molecular technologists are pulling 12-hour shifts in cramped rooms to meet the growing demand. Social distancing is not an option. Some workers wear N-95 masks, while others, like Rakhade, choose at times not to.

“I haven’t gotten anything yet,” she said, adding that employees are tested every week for the novel coronavirus out of precaution. “We don’t go and touch anything without gloves on.”

A meticulous assembly line starts the moment a courier arrives — and couriers with coolers packed with tests routinely pop into the lab.

Specimens are packed into one-time use plastic plates — designed to hold 96 biological samples — which are then injected with a magnetic solution to isolate any trace of the coronavirus ribonucleic acid, also known as RNA.

Another machine identifies how much novel coronavirus — if any — is in a sample, using a predetermined range for a positive result. A lower range of a positive could mean the nasal swab was not administered properly.

“Some people don’t go that deep,” she said.

For each batch, the process can take up to four hours. As of Monday, the turnaround time, which includes contacting patients with their results, can be anywhere from 24 to 48 hours.

“It is difficult to fulfill everyone’s expectations at this point,” she continued.

And then the patients themselves start calling.

“We just have to be patient with them,” Rakhade said. “Sometimes they get frustrated wondering why their results are not yet in. ‘What can I do,’ they ask. ‘I’m quarantined.’”

CORONAVIRUS IN HOUSTON: All of the latest news, numbers and analysis to keep you up-to-date, only on HoustonChronicle.com

On Sunday, for the first time in a month, Rakhade took the day off.

Up until then, she had spent several sleepless nights at the lab. She worked exhaustively in mid-March to finalize their COVID-19 certification with a positive patient sample supplied by the Centers for Disease Control to base their review.

“I stayed up two nights continuously getting that done,” Rakhade said. “The night before I finished, we went home around 2 a.m. and I came back at 6 a.m. to finish.”

During their research for certification, the lab stumbled across what appeared to be Laredo’s first case, she said. Without federal registration, which she finalized on March 18, the lab was unable to consider it official and recommended the patient — an elementary school teacher — be retested. According to Laredo officials, the San Antonio Metro Laboratory handled her test and her case was confirmed on March 17. Two days later, Altru Diagnostics’ first official positive arrived amid an estimated batch of 500 samples. That lone specimen was followed by about three more positives.

“It was very rare to see a positive. It had just started,” Rakhade said. “After that it became routine because we had been testing so many samples.

Despite all her preparation, the lab ran into a similar problem plaguing hospitals and the Houston and Harris County-operated drive-thru testing sites: supply shortages.

On Friday, the lab used up all its plastic plates designed to hold COVID-19 samples. The plates can only be used once and the manufacturer was also out.

Rakhade resorted to old-school bartering to get what they needed. Another lab in Houston, which does not do COVID-19 testing, had a stash of unused plates. And she had what they needed — micro fluiditcs chips for genetic testing.

“All the manufacturers are focusing on COVID-19 supplies,” she said. “They needed something they couldn’t get because it’s not COVID-19.”