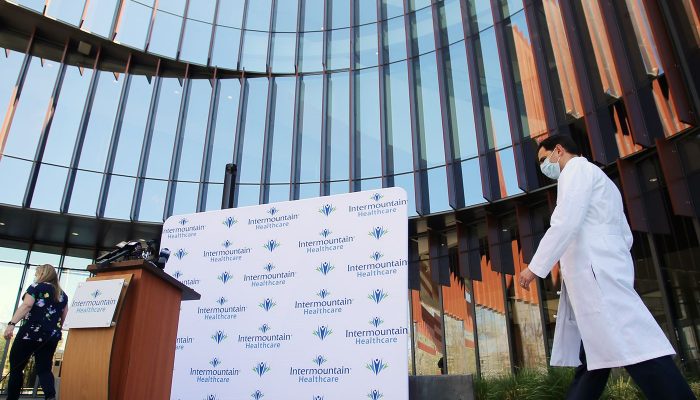 SALT LAKE CITY — When Cynthia and Moises Lemus tested positive for COVID-19, the young couple wasn’t too concerned for their own health but for that of their family members.

But over the next few days, their fever and other symptoms soon became so severe they realized they needed to go to the emergency room.

“When we went to the emergency room and we both got checked out, the doctor just came in and told me, like, ‘Hey, we’re going to need to keep Cynthia, because her oxygen levels are really not at the level where they need to be at. … It really scared me,” Moises Lemus, of Magna, recalled.

That was 16 days ago as of Tuesday. He hasn’t been able to be with her since then, though he has seen her twice via videoconference.

“I can’t hold Cynthia’s hand, and that is the most devastating thing to me to help her get through it.”

During her time hospitalized, 24-year-old Cynthia Lemus, a flight attendant, has been in critical condition and hooked up to a ventilator. Doctors have tried experimental therapies that haven’t helped much, Lemus said, but on Friday new hope came in the form of another treatment.

She became the first to receive a plasma infusion donated by someone who has recovered from COVID-19. Intermountain Healthcare on Tuesday officially announced the launch of the plasma treatment for those with the most serious cases.

The effort is part of a national investigative treatment protocol launched by the U.S. Food and Drug Administration. The Mayo Clinic and American Red Cross are part of the collaboration.

The virus damages tissues throughout the body — not just the lungs.

“The more virus that’s in the body, the more opportunity to cause damage to tissues. Antibodies neutralize virus particles, and so when a patient is infected with any virus, the immune system activates, forms antibodies that then neutralize the virus,” said Dr. Brandon Webb, chairman of Intermountain’s COVID-19 Therapeutics team.

“The premise for this new treatment is that when a patient is infected with a virus, the body mounts an immune response and makes antibodies to that virus. Those antibodies are not present in the population when there is a new disease like COVID-19. And so most people don’t have antibodies that give them protection against this new virus,” Webb said.

The hope is that antibodies in the blood of those who have recovered will help patients battling the disease.

No randomized control trials have taken place on the treatment, meaning there’s limited evidence of its effectiveness. But doctors believe it could help. About 200 patients in the country have already received the treatment and are being monitored.

Although the treatment hasn’t been proven, “we’re just really hopeful right now that that will help her and get her back to us,” Lemus said. “Everybody who’s recovered from it, we can band together and really help people who need that help.”

Cynthia Lemus received a plasma donation from the Mayo Clinic. In the the past 48 hours, she had improved, although she remained in critical condition on Tuesday, Webb said.

Officials are urging those who had positive test results for COVID-19 and have recovered to donate. Each donor can help up to four patients.

Patients need to fit standard blood donor criteria, be at least 18 years old and be fully recovered, preferably for at least 28 days. In limited circumstances, those who have been recovered for 14 days will be admitted. They also need laboratory evidence they had the virus.

The donations can be made by appointment only, and are taken only at Red Cross blood donation centers. Those who are interested are encouraged to visit redcrossblood.org to register.

A diverse pool of donors is needed because, like blood donations, plasma needs to be matched to the recipient, officials said. As the donor pool grows, the treatment should become available in other health care systems in Utah.

Now, it is being made available based on severity of illness and blood type.

The Utah Department of Health reported four more deaths from COVID-19, bringing the state’s toll to 32 on Tuesday.

All four fatalities were over age 60, were hospitalized when they died and had underlying medical conditions, said Dr. Angela Dunn, epidemiologist with the state health department. Two were residents of a Salt Lake County long-term care facility where an outbreak has been investigated, another was also a Salt Lake County resident, and the fourth lived in Weber County.

The new deaths mean half of the fatalities in Utah have been people infected while living in long-term care facilities.

“And this number, while tragic, it could be a lot higher as we have seen in other states where a single long-term care facility outbreak has resulted in more deaths than this,” Dunn said.

She said long-term care facility staff members in Utah have prepared since January to quickly identify cases and limit spread.

“And they are doing a great job, and I really want to recognize the long-term care facility staff out there whose job is more stressful now than ever, and yet so important to protecting this very vulnerable population. They’re protecting not only the health of their residents but also their mental health well-being as families aren’t allowed to visit,” Dunn said.

Dunn said officials are now working on a plan to perform “more proactive” testing of facilities that don’t yet have known cases.

The number of positive cases grew by 83 over Monday’s report, for a total of 3,296 people infected out of 72,358 tested. The agency’s daily report shows an additional 4,047 tests had been conducted. The positive rate has decreased to 4.5%.

“We are seeing really positive things in our numbers that are a sign that we’re flattening the curve. And so that means it’s even more important for us to continue doing this until we start seeing a decrease so that when we can open up the economy, we don’t see a surge in cases again,” Dunn said.

“So even though it might feel safe right now, it feels safe because we have been adhering to social distancing restrictions, and we really just need to stay the course so that we can keep this trend going and see a downward trend.”

A breakdown of Utah COVID-19 cases, hospitalizations and deaths by health district: