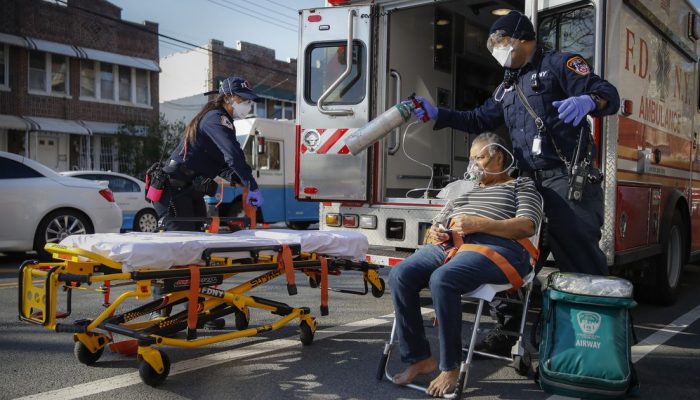 Two of my cousins have battled COVID-19 in separate hospital rooms. One is now recovering at home; the other is in a coma. She has lupus. I am very worried. Not just for the cousin still fighting for her life, but for a large extended family and a slew of friends concentrated in Louisiana and Texas.

I am a proud native Houstonian who grew up in a Louisiana parish where private, quality health care was a luxury for people who looked like me. I came of age not understanding why black people seemed to be blamed for every illness, socioeconomic problem or natural disaster waiting to wipe us out. We were applauded for being perceived as medically tougher than the general population, but scolded for indulging in soul food dishes and high-risk lifestyles.

Some Louisianans were even chided for not having the means to leave their homes as a hurricane approached. Buy a car. Get credit cards. I heard every vulgar thing imaginable about people I love, including the idea that God punished New Orleans, a chocolate city, for its sins, and native-born Americans were branded “refugees.”

Enter the coronavirus and a rising tide of a different kind that demands we look far beyond the usual suspects of poverty, insurance coverage and bank account for something to blame.

I am enraged that the richest nation in the world continues to withhold basic life-sustaining measures that would benefit all citizens. To date, America has only tested a small portion of the population for COVID-19. That’s not nearly enough to help determine how many people may be carriers of the virus. It is unforgivable that citizens from every walk of life do not have access to enough basic protective gear, from doctors and nurses on the front lines to bus drivers and postal workers doing important jobs.

As we struggle on, some continue to refuse to acknowledge the roles played by racism and discrimination when it comes to health outcomes. The numbers of coronavirus deaths among minorities compared with white people do not lie. When we acknowledge this, we have the potential for a more inclusive health care system and the power to make abundant healing available.

For decades, providers have known black Americans suffer, in disproportionate numbers, from lung disease, heart disease, diabetes, hypertension, obesity and more. As we prepared, or admit a lack of preparation, to face down a global pandemic, vulnerable communities should have been saturated with facts, as well as testing sites and mobile doctors.

According to the Centers for Disease Control, black people represent one-third of patients hospitalized with COVID-19 and more than 40% of the deaths across the country. Individual states have released some of the racial data needed to see these patterns.

In Dallas County, 75227 and 75115 are two of the ZIP codes with highest numbers of confirmed cases, areas of southern Dallas with high minority populations. One third of hospitalizations have been people with diabetes, one of the underlying conditions prevalent in the black community. I hope Dallas will provide more nuanced details and give facts that help us pinpoint ways to stay healthy. Congress is considering legislation that would make it mandatory for jurisdictions to report racial data about COVID-19 patients.

In Louisiana, blacks are only 32% of the population, but more than 70% of COVID-19 deaths, according to the state’s Department of Health and Human Services. Of those deaths, 66% were patients with high blood pressure, 43% had diabetes, 25% had chronic kidney disease, 24% were obese, 22% had cardiac disease, and 10% had cancer. Statistics like these absolutely demand more testing for the virus.

Trust is another issue, especially given the history of cases like the syphilis experiment on black men at Tuskegee Institute. In 2018, I interviewed Fred Gray, the civil rights lawyer who represented Rosa Parks and the Rev. Martin Luther King Jr. in Montgomery. Gray talked to me about his other clients — families of the men whose syphilis was never treated for a government study.

Whether black people can trust doctors is sometimes a silent barrier to quality health care. I recall seeing a prominent general practitioner in the parish when I was 17. Not a specialist, he was what our insurance allowed. The gynecological exam shattered any notion of trust and the white doctor prescribed birth control pills “just in case.” A string of indifferent doctors were constant reminders of the experience. Since then, I have mostly endured doctors and only recall a couple who genuinely seemed to care.

In 2019, while wearing only a paper gown, I was reminded of the parish doctor. My gynecologist, who had never discussed politics during any previous exam, hoisted me upright and said, “Don’t you think it’s just awful the way they’re covering Trump?” A long tirade followed about “fake news.” I never went back.

As I pray for my cousin to wake up, I hope millions of Americans who believed this virus was a hoax will wake up too.

Joyce King is a writer in North Texas and the author of several books. She wrote this column for The Dallas Morning News.