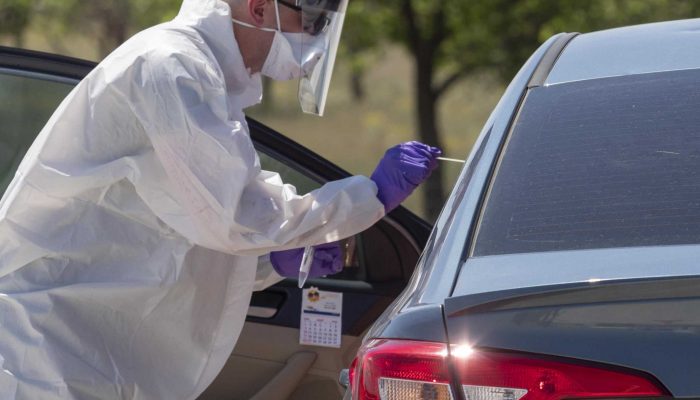 
The number of new reported COVID-19 cases and deaths last week was the largest since the pandemic began, suggesting that infections remain pervasive and much is still unknown about the size and scale of the Texas outbreak.

The state reported more than 7,000 new cases and 221 deaths, an increase of 24 percent and 33 percent over the previous week, respectively, a Hearst Newspapers analysis shows.

At the same time, as testing expands, the percentage of Texans who test positive for the disease has fallen to its lowest levels in over a month — a point that Republican Gov. Greg Abbott has turned to recently as a sign of progress.

The data tracks closely with national trends, and has some health experts worried as states including Texas move to reopen their economies.

“We’re opening against a backdrop of a lot of spread,” Scott Gottlieb, a former commissioner of the Food and Drug Administration under President Donald Trump, tweeted Monday. “Unless there’s a strong seasonal effect and summer slows transmission more than expected, we should expect cases to grow.”

Gottlieb called out Texas on Sunday on the CBS program “Face the Nation” as one of several states where new cases and hospitalizations continue to rise. Abbott lifted a stay-at-home order Friday and began allowing many businesses to reopen at limited capacity.

Monday, the Institute for Health Metrics and Evaluation at the University of Washington nearly tripled its death projections for Texas to 3,632, up from 1,288. The institute increased its estimates for several others states as well, citing the decisions to reopen.

More than 900 deaths were reported in Texas as of Monday.

Abbott has remained optimistic, highlighting several measures last week that he said showed the outbreak is shrinking. He has warned that new cases are expected to increase as more testing becomes available.

The positive test rate has fallen to about 8 percent overall, and to about 6 percent for cases reported in the past two weeks.

Health experts warn that the rate is an imperfect measure, especially as the state continues to ramp up testing. The outbreak could be growing, for example, but if the rate that testing increases is greater, it would appear that outbreak is getting smaller.

“Depending on how your testing strategy is changing — how many people you’re testing and who you’re testing — you may or may not be able to draw conclusions about the underlying epidemic,” said Spencer Fox, a research associate in statistical epidemiology at the University of Texas at Austin.

The state also doesn’t publicly track the days the tests were administered, only when it receives the results from public and private labs. Diana Cervantes, director of the epidemiology program at the University of North Texas Health Science Center, said tests administered several days or weeks ago could skew current totals.

Counties where deaths doubled include Brazoria south of Houston as well as Victoria, Harrison and Panola.

Abbott has acknowledged that as urban hot spots such as Houston and Dallas slow their outbreaks, new pockets are emerging, especially in rural counties where testing has been limited. Those include several counties in the Panhandle, where cases per capita remain high.

Abbott said in a television interview Friday that he had sent special teams including the Texas National Guard to the area to “make sure the response in Amarillo and in the surrounding counties is as robust as possible.”

State and federal officials have been investigating outbreaks at meatpacking plants in the region, including one in Moore County, which has the highest COVID-19 caseload per capita in the state.

Some experts have recommended much higher testing levels to get a fuller picture of the outbreak as restrictions are lifted and new infections spread.

Abbott has said increased testing and the ability to track down contacts of those infected will be critical as the state moves toward the next phase of reopenings, slated for May 18.

Until then, the governor seems enthusiastic about what he’s seen so far. Over the weekend, he tweeted that the number of estimated COVID-19 recoveries now exceeds the number of “active COVID cases for the past 2 days.”

“That’s exactly what we want to see,” he said.