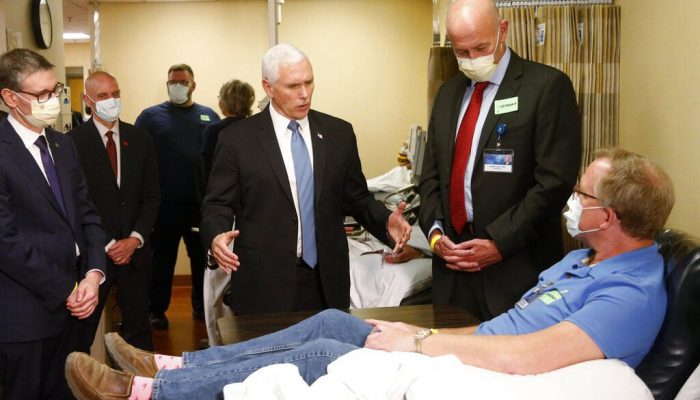 Gov. Greg Abbott’s decision to reopen businesses despite an ongoing rise in intensive care unit bed occupancy rates (from 58% on April 21 to 65% on April 27 ) in Dallas demonstrates a total lack of concern for human life. Big businesses and money (from his biggest donors) are obviously far more important than the lives of the people he is sworn to serve.

The valiant efforts of our first responders and our dedicated health care providers to avoid the catastrophic results seen in New York may be for naught.

Who were the doctors and scientists on Abbott’s commission who advised this action? It is telling that most of those advisers were from the business sector and would gain financially from Abbott’s reopening mandates. Shame on you, Greg Abbott!

Re: “Open for business? Be ready for a clash,” by Gromer Jeffers Jr., Monday Metro column.

While I agree there are some differences between Gov. Greg Abbott and Dallas County Judge Clay Jenkins in the timing of easing restrictions, they are fairly similar in their plans. The main difference between their approaches is a week or two at most, plus forcing residents to wear face masks.

Abbott’s approach is also very much driven by science and data. If you listened to his press conference a week ago, he referenced data more frequently than Jenkins. To refer to Jenkins as the only one using science and data is ridiculous, and I suspect it’s politically motivated.

Being a scientist and engineer myself, I learned many years ago that data is open to interpretation. That’s why peer review papers are written — to allow differing interpretations to be discussed freely and openly. From these differing perspectives, scientists, engineers, doctors and ordinary people can draw conclusions, which may not be the same.

In conclusion, you can be certain Abbott’s plan for Texas will be driven by science and data, even if your interpretation of the data is different from his.

Re: “Pence goes unmasked — He skipped wearing one — a violation of Mayo’s policy — to look people ‘in the eye,’” Wednesday news story.

So the vice president is saying, “As the head of the coronavirus taskforce, I don’t care enough about it to set a good example by wearing a mask as recommended by the Centers for Disease Control and Prevention.”

Seeing the vice president of the United States standing unmasked amid the masked staff of the famous Mayo Clinic gave me a cold chill. I shuddered because my brother spent a year in that hospital. I know how dedicated and responsible every member of Mayo is to their patients.

What an insult to have Mike Pence visit unmasked. His excuse that he has been tested often and found negative for the virus only proves he enjoys many more gifts from taxpayers than the rest of us have. I find it hard to believe that we have such self-absorbed men leading our country.

Did I miss the Centers for Disease Control and Prevention’s recommendation that we wear masks that cover our eyes, too? The vice president commented that he wanted to look the health care workers in the eyes, and unless I’m wrong, eyes are above the mask line.

I also read with disappointment that he is tested regularly for COVID-19. I don’t begrudge anyone a test who needs one. That said, perhaps if the current administration practiced the guidelines in place, testing wouldn’t be required as often. Those precious tests could then be shared with those in need across the country.

Both the action of the vice president of going without a mask and his access to frequent testing are not actions of a selfless leader or an caring administration, but an administration that doesn’t care about others and is more concerned with staying in power than doing the right thing for its citizens.

Vice President Mike Pence visited the Mayo Clinic with footage showing him without a mask and not practicing social distancing.

Per the clinic, he had been notified in advance of its mask requirement, making his act one of conscious disobedience. The fact that he flaunted his disrespect of health care workers during this crisis should enrage us all. That this shameful display of how not to behave happened at the Mayo Clinic, esteemed around the world, may guarantee it additional media coverage.

His nonsensical excuse for not wearing a mask — that he wanted to be able to speak eye to eye — ranks with one we might expect to hear from another high official.

No act of his could dishonor this highly reputable group of physicians; he has only dishonored himself and his office. It is my hope that he will receive from citizens the rebuke he so richly deserves for his thoughtless behavior.

This photo needs a second side-by-side front-page article concerning people like Hugo Dominguez, a Quality Sausage employee who died of COVID-19. He was a member of our next line of heroes. The meat food chain has four steps. First, we have the farmers, ranchers, etc., who raise the livestock that goes to market. Second, we have the people who process the livestock at processing plants. Thirdly, we have the truck drivers who transport the product to various markets. Lastly, we have the people who unload the product and make it available to the consumer.

If any one of these steps ceases to function, we have no food products to sustain the people. President Donald Trump is correct to demand the meat processing plants stay open and produce products to sustain life of millions of people. We need to spend as much time lauding our meat processing employees as we do our health care workers. These employees are our next line of heroes.

Click here to submit a letter to the editor.