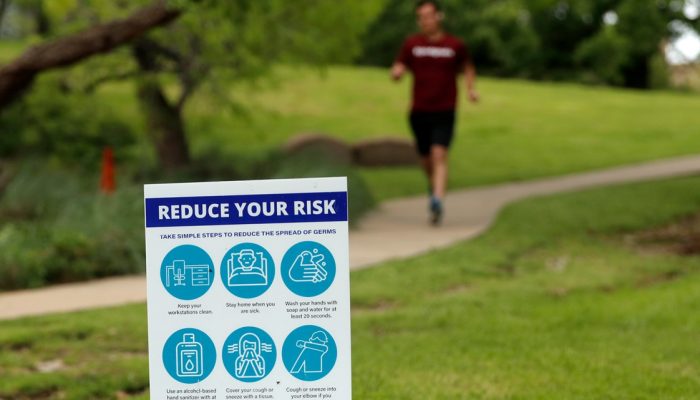 For the first time in the city’s history, Dallas officials have made the decision to close all 397 parks to prevent the spread of COVID-19.

City parks and golf courses will close at 9 p.m. Friday and will reopen at 7 a.m. Monday. Trails will remain open, officials say.

Dallas officials made the announcement Wednesday night. On Thursday morning, Mayor Eric Johnson and Park and Recreation Director John Jenkins explained their reasoning behind the decision.

Johnson said they gave some thought to leaving the parks open and trusting people would distancing guidelines. However, they ultimately decided they would be putting the public, city staff, and first responders in harm’s way.

Barricades and digital signage will be placed at the parks to keep people out of the area. In addition, code compliance, park rangers, and other enforcement staff will be patrolling parks to make sure residents don’t try to enter during the holiday weekend, Jenkins said during the news conference.

Mayor Johnson encouraged residents to celebrate at home and stay safe during the holiday weekend.

“It’s important that we don’t lose sight of what’s important right now. Our health, and our safety. So this weekend, celebrate at home and stay safe. We are making progress against COVID-19. You’re doing right by your city by staying home,” Johnson said.

A new round of weekly jobless claims is out Thursday morning, revealing 6.6 million more Americans have filed for unemployment last week. The new numbers mean roughly one in 10 workers have lost their jobs in just the past three weeks.  Dallas Mayor Eric Johnson and Dallas County Judge Clay Jenkins announced the federally-funded drive-thru testing sites will continue through May 30. Those sites are at the American Airlines Center and Ellis Davis Field House.Health officials say the peak of coronavirus cases is likely still weeks away. Dallas County Health Director Philip Huang said Wednesday afternoon that he expects the peak in cases to occur in late April or early May.

Confirmed cases of COVID-19 continue to increase throughout North Texas, particularly in Dallas and Tarrant Counties.

Health officials in both counties said they expect to see cases and deaths continue to climb in the coming weeks.

The 20th person to die in the county is a Fort Worth woman in her 60s who had underlying health conditions, officials say.

In a written statement Thursday, he reminded residents to only leave home for essential activities and to practice social distancing.

“The best way to fight this illness, for now, is to stay at home and not catch it in the first place,” he said.

Officials confirm another Dallas police officer has tested positive for coronavirus. The command staff was notified Wednesday night of its eighth case within the department.

Police officials say the officer works in the property room at the Dallas Police Department Headquarters.

That officer has not been at work since March 24 and received results after being tested Saturday, according to police officials.

RELATED: These are the confirmed cases of COVID-19 in North Texas first responders

Officials say the officer will remain quarantined at home for 14 days or until cleared to return to duty by DPD’s medical team.

The area where the officer worked was sprayed and sanitized by a professional contractor on Tuesday, DPD officials say.

City of Red Oak to close parks for holiday weekend

Local officials have announced the closure of some parks and additional bans on gatherings ahead of the holiday weekend in order to prevent the spread of the coronavirus.

On Thursday, City of Red Oak officials announced all parks will be closed from Friday through Sunday.

The closure includes all city parks, pavilions, walking trails, basketball courts, and restrooms, according to a news release.

Crews will place signs, caution tape, barriers, and have regular patrols to enforce the closures in the community.

Avoid close contact with people who are sick.Practice “social distancing” and stay at least 6 feet away from others and avoid large public gatheringsAvoid touching your eyes, nose, and mouth.Stay home when you are sick.Cover your cough or sneeze with a tissue, then throw the tissue in the trash.Clean and disinfect frequently touched objects and surfaces using a regular household cleaning spray or wipe.Follow CDC’s recommendations for using a facemask.Wash your hands often with soap and water for at least 20 seconds, especially after going to the bathroom; before eating; and after blowing your nose, coughing, or sneezing.If soap and water are not readily available, use an alcohol-based hand sanitizer with at least 60% alcohol. Always wash hands with soap and water if hands are visibly dirty.Consult CDC’s travel website for any travel advisories and steps to protect yourself if you plan to travel outside of the U.S.More on WFAA: